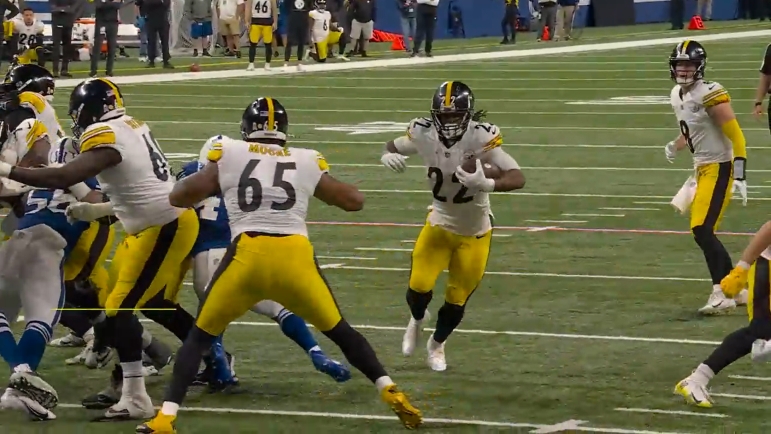 Early on in the Monday Night Football matchup against the Indianapolis Colts, Pittsburgh Steelers second-year left tackle Dan Moore Jr. looked like he was going to be in for a rather long night in the first quarter.

Moore Jr., who has had his struggles throughout the season, got off to a tough start against Colts’ standout pass rusher Yannick Ngakoue, drawing a holding call on the firsts drive of the game that ultimately put the Steelers behind the chains, resulting in a 45-yard field goal from Matthew Wright.

On the next drive, Moore Jr. gave up a sack to Ngakoue, but the second-year pro bounced back after that, shutting down the Colts’ standout pass rusher throughout the rest of the game while being a key presence in the Steelers’ rushing attack on the night.

Just watch this rep here & the patient/independent hand usage from Dan Moore JR. This is high level stuff he strings together

According to Pro Football Focus, Moore Jr. graded out at a 71.9 on the night, including a team-high 86.8 in pass blocking. His ability to bounce back from a tough start wasn’t a surprise to head coach Mike Tomlin, who spoke of Moore’s rebound Tuesday during his weekly press conference.

“It’s football. In the National Football League, you’re going to lose some downs. There is ebb and flow,” Tomlin stated to reporters, according to video via the Steelers’ official YouTube page. “But, you remain singularly focused on winning. When you do that, you don’t tote bags of negative plays. And that’s what we ask all the guys to do.

“It requires a certain level of maturity, and that’s what Dan has showed since Day Zero. That’s why he’s been such a significant contributor since Day Zero.”

Moore’s bounce back from a tough start Monday night against an accomplished, high-level pass rusher was impressive to see, especially from such a young player who is still trying to feel his way through the league and is learning each and every week in a trial-by-fire style.

Quietly, he’s developing some impressive hand usage overall and remains a key piece in the success of the Steelers’ run game. While he still has his issues at times in pass protection and can struggle with power rushes, he continues to grow and put together some solid outings overall. That’s why the Steelers have placed so much belief in him and continue to speak highly of him.