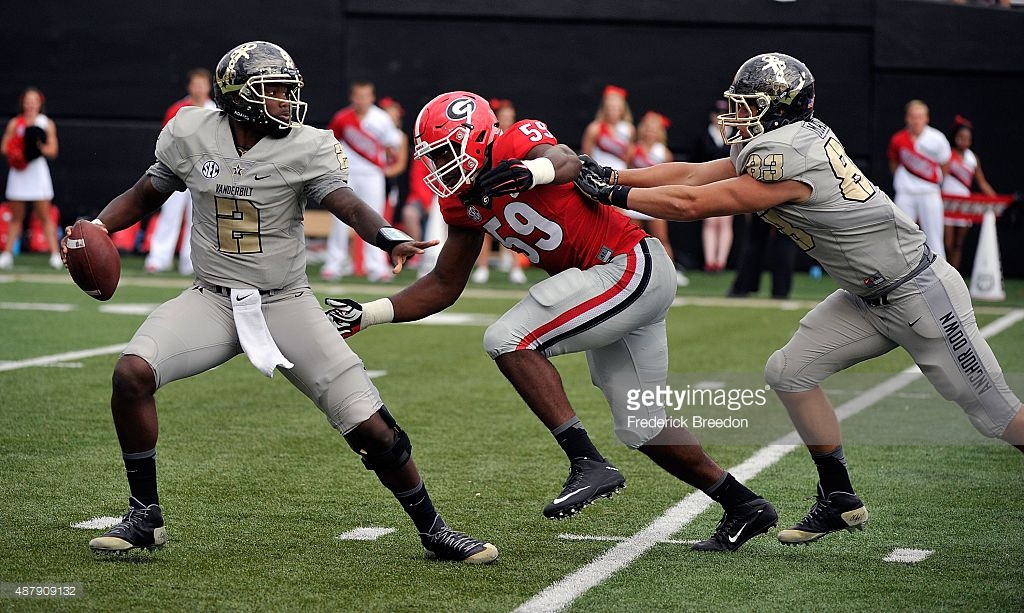 Being as the Steelers might have an interest in drafting another outside linebacker this year, today we will have a look at Georgia’s Jordan Jenkins.

Jenkins certainly has a nose for the football and he fights hard on every play. On this split-zone run against Alabama, Jenkins explodes into the left guard at the snap from an inside down position and then spins back inside to not only make a tackle but force a fumble.

On this play, Jenkins fights off the Alabama left tackle to make a tackle on an inside run.

On this split-zone play against Alabama, Jenkins fires off the ball and pushes the tight end on his side back into the backfield. His penetration blows up the entire play and while he didn’t make the tackle he did his job by forcing the ball-carrier back inside.

Jenkins has deceiving quickness and this right tackle never stood a chance against it. He easily shoots the gap for a run stop.

While I don’t consider Jenkins to be an elite athlete, he certainly can move laterally without problems. On this stunt from the right side of the defense, he loops into the center and then uses his long arms to control the offensive lineman on his way to registering a sack. He can disengage very quickly.

Once again, Jenkins exhibits quickness off the line along with his high motor. After being dragged down, he quickly gets up to complete the sack.

Perhaps my favorite highlight is this play against Vanderbilt. Watch as Jenkins explodes off the left edge of the defensive line and then drive the right tackle back into pocket using his long arms and strong hands.

Summary: Jenkins was certainly a fun player to break down and there really isn’t a lot I didn’t like about him. What stood out the most to me was his ability to use his long arms and strong hands in order to keep offensive linemen off him. He really sets the edge well against the run and appears to have a nose for finding the ball-carrier while doing combat.

While he never registered more than 5 sacks in a single season at Georgia, Jenkins did provide a decent amount of pressure as pass rusher. Had he not been slowed by a groin injury last season, I’m sure his sack total would’ve been higher and he perhaps would have even hit double-digits. Jenkins really likes using the bull-rush as his main pass rush move and that’s not surprising being as he has such long arms. I really wanted to see him try to turn corner more outside and show some bend and ankle flexibility in the games that I watched of him and that’s one thing to look for during the upcoming scouting combine.

Being as Jenkins wasn’t asked to drop much at Georgia, it will be interesting to watch him take part in the pass dropping drills in Indianapolis as well. In short, I’m expecting him to test well and he could wind up being a borderline FORCE player when it comes to his times and jumping measurements.

While some 4-3 teams might look at Jenkins as a 4-3 defensive end, his lack of length combined with his thickness has him best suited to play outside linebacker in a 3-4 defense on either side of the line. He certainly made the right decision when he returned to Georgia for his senior year.

As to where Jenkins will ultimately be drafted, I have a third-round grade on him with the slight possibility of him sneaking into the bottom of the second round. I suspect the Steelers will have interest in him and thus won’t be surprised if they visit his pro day in addition to bringing him to Pittsburgh for a pre-draft visit. Wherever he ultimately lands, I believe Jenkins is a player who can contribute on defense during his rookie season. Due to his work ethic, I also believe he’s far away from his ceiling as a pass rusher.

Games Watched: at Vanderbilt, vs Alabama (rain), at Florida