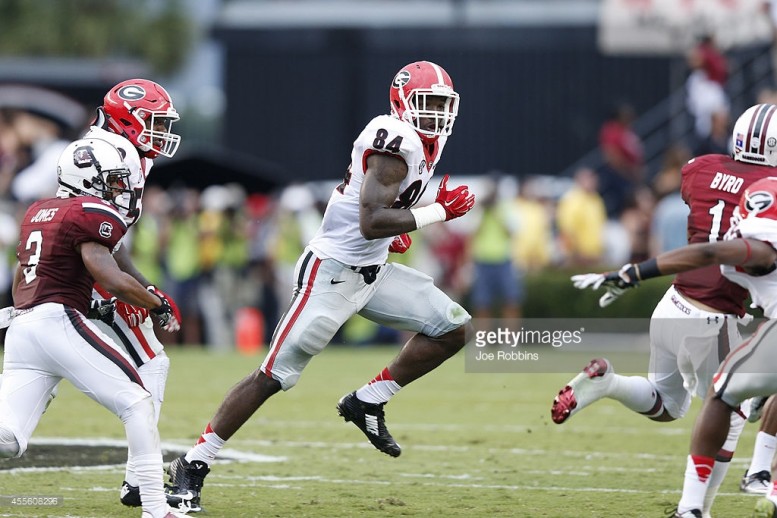 Today, another outside linebacker from Georgia as we will take a long look at Leonard Floyd.

Floyd’s athleticism is something that sticks out quite a bit on film and that’s not too surprising when you consider his shooting guard-type build. Here, against Florida, Floyd easily slips inside the right tackle with a great fake to the outside followed by a jump back inside. This results in the quarterback being flushed out of the pocket to his side.

As far as Floyd’s ability to rush off of the edge, he mostly relies on his quick get-off and ability to turn the corner in lieu of using his long arms or a power rush and you can see an example of that below. In other words, I consider him more of a finesse pass rusher than I do a physical one. He is also great twisting inside via stunts to provide pressure as well due to him being a great athlete.

Georgia used Floyd in a lot of different ways in 2015 and that included him seeing snaps in the slot as well as off the line as a second level linebacker. Below is an example of Floyd reading and reacting against a run to his left as he cautiously wades through trash on his way to making a shoulder tackle. Overall, Floyd didn’t seem comfortable playing inside as he really was hesitant even though he seemed to diagnose well.

While he certainly won’t be considered a shut-down pass defender, Floyd can run in space with tight ends and running backs. However, due to his slow route recognition, Floyd has to rely totally on his speed and athleticism in order to compensate. Watch how he gets himself flat-footed but makes up for it with his long stride to just barely lose the race. As far as zone drops to the flat go, Floyd is a natural at that due to his ability to flip his hips.

As far as Floyd’s play against the run goes, I found it to be acceptable when playing on the line as opposed to off of it. Even though he gives up a lot of weight at times, Floyd certainly doesn’t shy away from contact or his duties as an edge run defender. Here, he takes on the inside Florida tight end and pushes him back after leading with his inside shoulder. After he crosses the face of the blocker to the outside, the ball-carrier has to look for a lane back inside. There are instances on tape of Floyd being bullied some by large tackles and aggressive guards, but as a whole, I thought he stood tall against them and very rarely will you see him off his feet or blown completely out of a play.

When it comes to his tackling ability, Floyd doesn’t always bring his feet with him and this missed tackle below against Florida resulted in a huge play. According to STATS, Floyd had a total of 11 missed or broken tackles in 2015, but even so, he was always around the football and thus finished second on the team with 74 total tackles.

Summary: At the upcoming scouting combine, Floyd figures to put up great numbers not only in the timed drills, but those that measure explosion such as the vertical leap and the standing broad jump because of him being so athletic. Because of that, along with his lanky build, I expect several will compare him to Vic Beasley and Randy Gregory, two of last year’s top edge rushing prospects. Floyd, however, plays the run much better than those two did during their college careers, in my opinion, and that will be appealing to teams who run 4-3 and 3-4 base defenses.

Floyd also has a great deal of experience lining up at various positions on the field and that includes him being down on the edge in addition to standing up. Additionally, there’s a lot of tape of him lining up in the slot and running with tight ends and while he needs improvement in that area, he can certainly keep pace vertically as well as horizontally.

The main question when it comes to Floyd as a pass rusher is whether or not he can be effective with a power rush against strong and athletic tackles as he won’t be able to rely solely on his quick first step inside and ability to turn the corner on the edge. As previously mentioned, he should excel on inside stunts in any front due to his ability to move quickly. Ideally, Floyd would play a LEO position at the next level, at least initially. He will need to add core strength to his upper and lower body and hopefully add a little bit of weight along the way to help not only as a pass rusher but in setting the edge against the run.

Floyd figures to be more of a pressure provider than a sack producer at the NFL level, but that’s not necessarily a bad thing. He belongs either on the line at the edge or lined up in the slot as using him inside and off the line will waste his many talents.

Floyd will probably be perceived as a late first round prospect and because of that he could hear his name called during the first night of the draft. At worst, he should come off the board early in the second round. Floyd’s build and physicality figure to be the subject of many pre-draft conversations that teams have about him. I consider Floyd to be a jack of all trades as an edge player but master of none of them. Even so, he still hasn’t hit his ceiling as a player.