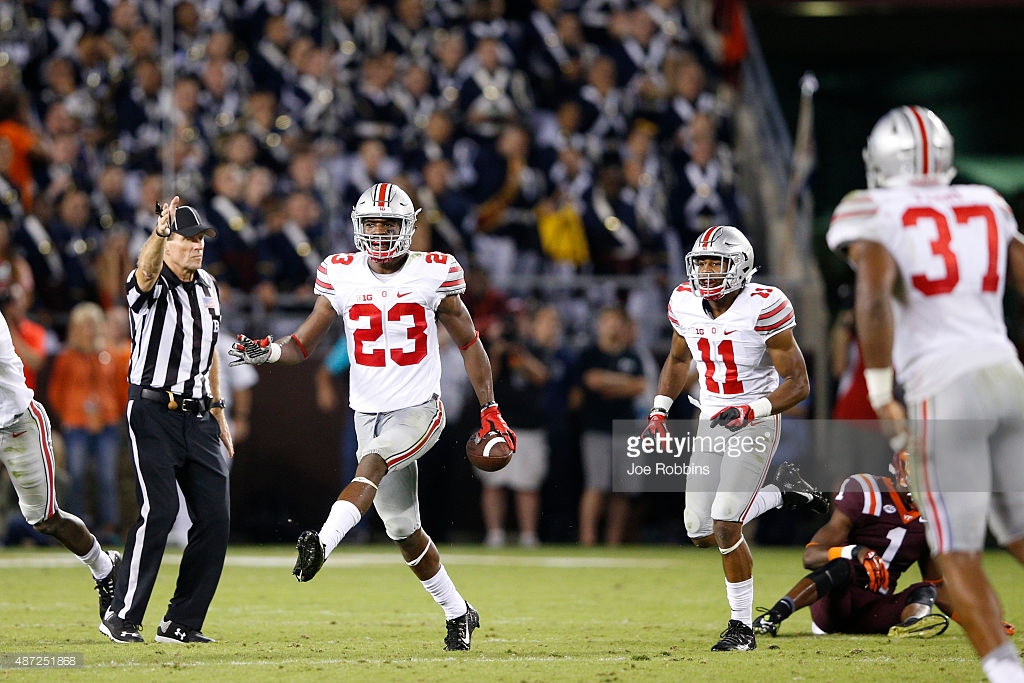 – NFL frame, long, muscular makeup
– Downhill player, nose for the ball, reacts and gets to his spot quickly, and can fill the alley
– Explosive player who fires through contact and has lower leg drive to create power and make a forceful tackle
– Strong upper body/hands, capable of taking down dangerous runners in the open field
– Finishes plays and will throw himself into the pile, seeks out contact
– Spent a lot of time and comfortable in the box, where he plays the best
– Timed very well for his size
– Productive career against good competition
– Came up huge in big games

– Tackling angle is wildly inconsistent, ranging from dropping head/eyes and going too low or aiming too high and falling off
– Limited look in coverage and wonder if he’ll be exposed in space, despite his impressive 40 time
– May be limited schematically at the next level and not able to play in space
– TFL numbers don’t indicate how close he played to LOS, played the run

Powell, before the Combine, had the look of an in-the-box, filly the alley run stopper. Of the four games I watched, that is what I kept seeing on tape.

Penn State’s Saquon Barkley ran all over the Buckeyes, 199 yards and 7.5 yards per carry. Tough dude to bring down but here is Powell, wrapping him up by himself.

And here again, taking down this receiver who slipped by the corner.

I did not get a good feel for his coverage but he can make plays underneath, breaking up this pass against Rutgers.

While he made a lot of tackles, aspects of it are also his biggest weakness. His tackling angle needs a lot of work. Sometimes he drops his head and it’s too low or it’s too high and he falls off.

In that same Penn State game I referenced earlier, Barkley jukes Powell, who drops his head and whiffs badly.

In 2014, Powell doesn’t do a good job of breaking down, and is up too high, leading to the running back running through him before going down with the help of a secondary defender.

Powell ran well at Indy, a 4.47, buy I’m not sure if that translated over to the tape I watched. He did record several interceptions in his career but I did not see much coverage skills and it makes him a tough evaluation. A guy who played down near the line of scrimmage and looks to be at his best going forward, not backward.

But he has the body type and style to do so and appears to be a mature, passionate player who immediately decided to stay in Ohio State despite Jim Tressel stepping down after Powell committed, telling the media he came for the school and the program, not just one coach.

“It is very unfortunate for coach Tressel but it doesn’t affect my decision at all. I didn’t hear anything about the business school going down or falling apart and college is college, you go for an education and to play football. Ohio State is Ohio State and it always will be no matter who is wearing the headphones. I want to send a message to everyone that I’m still on board and everyone else should be as well.”

With how well he ran, especially compared to everyone else, he’ll get a bump. While I don’t have a great feel with his coverage ability, we’re trying to identify some transferrable traits. He timed well, was explosive in tests, and didn’t look totally lost in coverage drills, mostly designed for corners. That is a good start but there is an element of projection, even if you believe you can coach him up (most coaches thing they can coach a guy up, it’s their job).

That projetion bumps him down a bit but if you want a hitter who can develop, Powell is your dude.