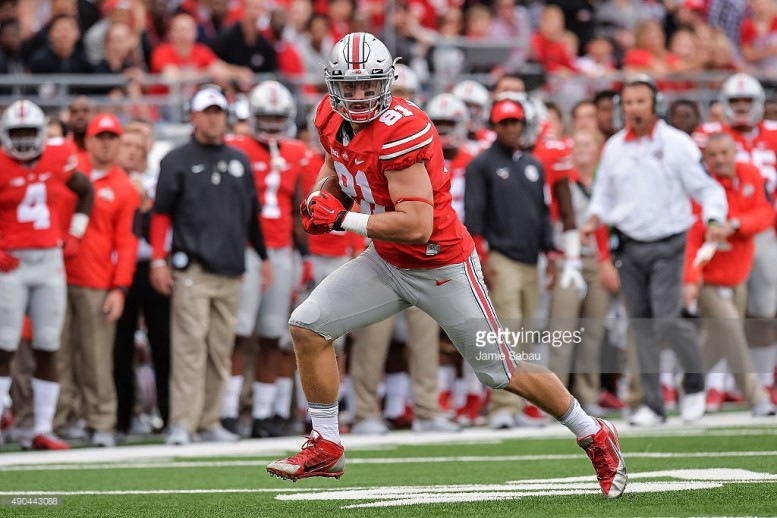 Being as the Steelers might have an interest in drafting another tight end this year, we take a look today at Ohio State’s Nick Vannett.

– Great size and build for NFL tight end
– Willing and able run blocker
– Uses base well as blocker
– Durable player and very rarely off field
– Lined up wide, in slot and as both move and in­line tight end
– Understands angles
– Understands soft areas against zone and how to find them
– Soft hands
– Decent get off as route runner and relatively fluid in open space

It really is worth watching multiple games of Vannett to get a good feel for his blocking. when you do, you won’t feel cheated as he is fairly sound overall in his technique. Additionally, he didn’t hide from the fact that is was his primary job in the Ohio State offense.

On this power run to the left side, Vannett does an excellent job of turning the edge defender away from the play. Look at his wide base against Perez Ford. If there were a negative to point out here it would be that Vannett seems to allow hands inside his chest. It’s not a huge deal on this play, but I did notice similar incidents in the tape that I watched. Nit-picking, but worth noting nonetheless.

While Vannett wasnt used a lot in the passing game at Ohio State, he did show that he was a capable pass catcher and route runner from various spots on the field. Here he is lined up as an h-back on the right side of the offense. He first sells pass protection before quickly releasing into the flat for an easy grab along the sideline. While it’s hard to see in the clip, Vannett shows great body control and dexterity in adjusting to a throw behind him.

If you are a Steelers fan, this split-zone run should look familiar to you. Here, Vannett easily provides an off-tackle running lane after working right to left at the snap of the football. You will see Ohio state run a lot of split-zone last season and for the most part, Vannett did his job well in that scheme.

Vannett also functions well as an end-of-the line blocking tight end. here, he is asked to block down inside on the right defensive end on a power run to his side. It results in a nice run.

Vannett is not without his warts, however. here, he needs to do a better job of exploding to a favorable spot and angle on this inside zone run. Because he is slow and late, the cornerback is able to slip inside for the tackle. You will also see Vannett hesitate in the second level at times before initiating contact. In other words, he will at times allows the defender to attack him instead of it being the other way around.

When you go through Vannett’s tape, you will see him run a lot of shorter underneath routes where he’s asked to settle in soft spots of zone coverages and show the quarterback his numbers. Here, he does a good job of doing just that out of a bunch formation. after cleanly catching the ball with his hands, Vannett quickly gets himself turned and up the field and shakes a tackle in the process.

It’s a shame that Ohio State didn’t use Vannett more in the passing game during his career as he appears to be a capable route runner with good hands. Due to television angles, and the fact that Vannett wasn’t used much in the passing game, it’s hard to get a good idea about his overall ability to not only separate from physical defenders, but also his ability to stretch the field with speed. It will be interesting to see all of his combine numbers and I’m willing to bet his agility times (3-cone & 20-yard shuttle) won’t be poor.

In my opinion, Vannett, is a better blocker than Hunter Henry is. Henry, however, is the more accomplished pass catcher of the two and probably a bit faster. Last year, former Ohio State tight end Jeff Heuerman was drafted in the third round after having a college career similar to that of Vannett. Vannett, however, might even be a slightly better player than Heuerman and it will be interesting to match up the combine numbers of the two at the end of February.

Being as Vannett figures to be a top-three tight end this year, I can see him being drafted either late in the second round or by the final pick of the third round. He is most definitely an impressive all-around tight end, who might have a lot to offer to an NFL team as a pass catcher in addition to being a reliable run blocker.

Expect the Steelers to bring Vannett in for a pre-draft visit.

Games Watched: vs Northern Illinois, vs Penn State, at Illinois