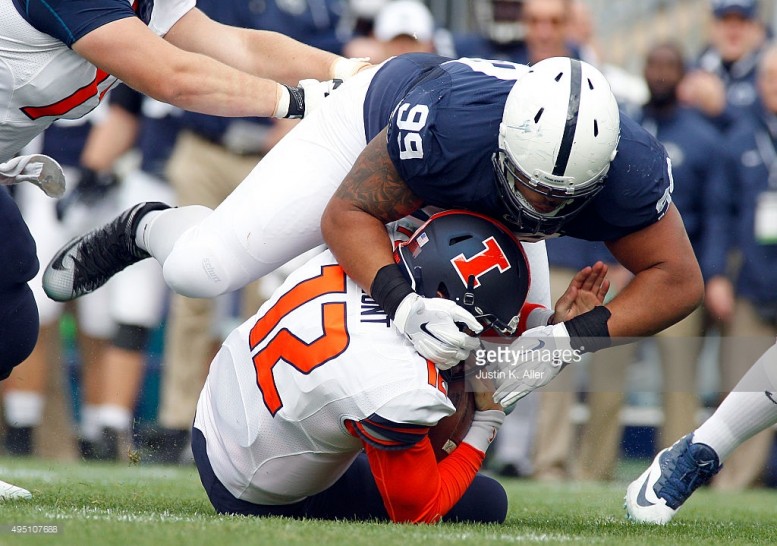 – Very active hand-fighter
– Power, power, power. Adept at using strength to go through blockers to the ball
– Smart, recognizes developing screens and disengages
– Recognizes when to get his hands up to deflect balls
– Plays through the whistle, high motor
– Great low pad level to blow up through offensive linemen
– Surprisingly quick up off his feet
– Ran a lot of stunts (most common: E-T, T-E and T-T)
– Picks through traffic for tackle
– Turns corner well on stunts
– Good vision, plays to ball
– Impressive closing burst for big man

– Not laterally quick, has to be a downhill guy
– Bad straight-line speed, won’t go sideline to sideline
– No change of direction skills/short-area hip flex
– Can be slow to disengage against the pass
– Drops vision and eye level with his pad
– Bullrush and hand-fighting are his only tricks against the pass

It’s important to first note the depth along the Penn State defensive line. Johnson and fellow linemen Anthony Zettel and Carl Nassib are all draftable prospects, and they could wreak havoc at times. Here, Johnson (playing 1t) and Johnson (playing 3t) get penetration immediately and blow up the inside zone play. Just how much damage do they do? Well, it looks like the run is supposed to hit the LG-C A gap, but Tevin Coleman is left to bounce the ball back. Johnson already proves himself too much to handle for a single lineman. He powers off the ball and then powers through the offensive lineman to wrap up for the tackle.

Johnson fires off the ball low and into the center. He works his hands around into position to disengage and sheds violently. This is a pretty typical run rep for Johnson, who is consistently a force in one-on-one situations for offensive linemen.

Again, working from the 1 tech position. He’s using sheer power to disrupt the offensive lineman, put him on skates, and violently disengage. Really quality stuff against the run for Johnson.

Johnson is a remarkably smart prospect. He’s playing the 1 tech here (almost looks like a tilted position à la Joe Greene). He swims over the offensive lineman and immediately the warning bell goes off in his head – too easy, screen set up. He turns his head, locates the running back, and actually shows some good sideline-to-sideline speed to make the tackle. This was the best I saw Johnson go sideline-to-sideline, so don’t take it as any indication of his open-field ability, but watch this play more for his mental processing, particularly considering the reaction time of the other offensive linemen.

All too often against the pass, Johnson gets swallowed by interior offensive linemen. His strength is his greatest asset against the run, but he doesn’t have pass rushing moves to complement it when trying to get to the quarterback. Initially, Johnson (lined up as the RDT in a 3t) attacks the upfield, outside shoulder of the LG. However, when that doesn’t work, he has no plan to counter. Instead he tries to weakly bullrush the LG, which has little effect.

I admittedly haven’t worked too much with tape of the interior line prospects in this draft yet, so I can’t make any sweeping generalizations about “best in his class” or anything like that at this stage. What I can say is that Johnson flashed NFL-quality low pad level off the ball back as far as 2014. He is stout against the run and controls the point of attack.

I can also confidently state that people underestimate how dominant the Ohio State offensive line was this year: almost otherworldly. I’ve now watched Austin Johnson, Yannick Ngakoue and Jihad Ward specifically match up with them in 2015 and saw all three get blown off the ball. Outside of that game, Johnson looked like an extremely viable prospect.

Johnson played some 3t at Penn State with a handful of 0t (true nose) snaps, but was mostly at 1t. At the next level, I want him right over the ball or right over the center – 1t or 0t only. That allows him to create the most disruption with his strength in the middle and command double teams. Much of his pressure when rushing the passer came when running stunts, which he actually does well for a DT. Many college offensive lines struggle to pass twists off to one another, but not many offensive tackles (much less running backs) can handle a man of Johnson’s size coming around on the twist. So in that sense, his production was somewhat manufactured by scheme.

Johnson is what Mike Mayock would call a Bubble Butt. He has prototypical NFL size for an interior defensive lineman, but is scheme-limited in that he really shouldn’t be outside of the center at all. He’s absolutely dominant as a run-stuffer but has a lot of work and refinement needed to be an effective pass-rusher yet at the next level. However, his closing burst actually belies his size and his violent hand-fighting does intrigue.

Although nose tackle isn’t the largest of needs for Pittsburgh right now, it would become a lot more pressing if Steve McLendon departs in free agency. Johnson has a very high floor – he could probably be a passable two-down starter on the interior for most NFL teams in his rookie season. He just won’t be able to make a true impact as a pass rusher until he gets more coaching and development.