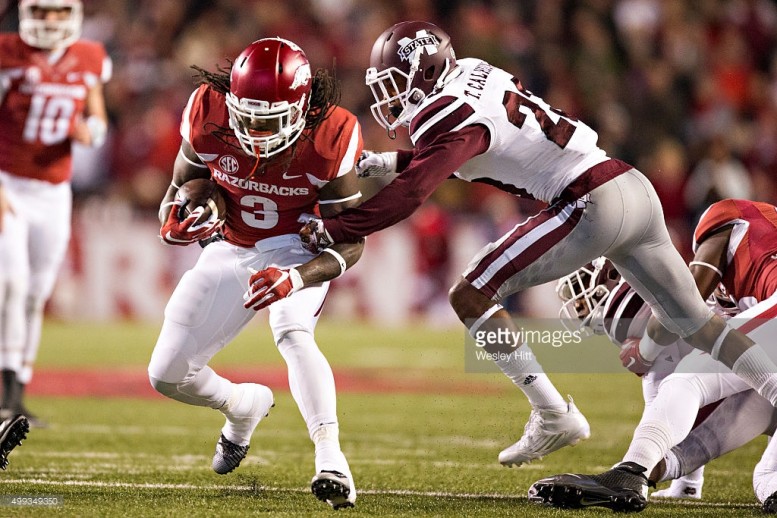 Today, we will have a look at Mississippi State cornerback Taveze Calhoun.

-Physical corner unafraid of contact
-Quick reaction time and closes quickly to the ball
-Good feel and instincts in zone coverage
-Intelligent CB that diagnoses plays and routes quickly
-Effective open-field tackler
-Supports the run very well when attacking the line of scrimmage
-Rarely beaten over the top, respects speed across from him
-Rips and slaps at the ball when in the air, very combative on throws
-Holds valuable experience against NFL wide receivers from playing in the SEC

-Occasionally takes bad angles to the ball carrier, forgets to wrap up
-Struggles to get off blocks on the boundary due to peaking in the backfield
-Tends to duck his head on tackles, prone to whiffs
-Over-aggressiveness can take him out of plays
-Footwork in man-coverage is spotty, needs cleaned up
-Struggles with balance at times
-Appears tall and uneven in backpedal
-Tends to lose track of his man when play breaks down and QB leaves the pocket
-Stares into the backfield far too often
-Not an exceptionally fast corner

-2015 William V. Campbell Trophy Finalist
-2015 NFF National-Scholar Athlete
-Starter at CB for three years
-Played in 50 games (36 starts)
-Recorded 161 career tackles, 12 tackles for loss and six interceptions to go along with three forced fumbles and one fumble recovery
-Named First-Team All-State by the Clarion-Ledger across all divisions in high school
-Listed among the Top 40 Most Wanted in the state by the Clarion-Ledger
-A consensus all-state prospect in the 3A division following senior season
-Selected by The Mississippi Association of Coaches to the 40-man roster for the Mississippi-Alabama All-Star Game

If you’re looking for an ideal cornerback to slide right into the fold as a man-off and zone-coverage corner who is physical, smart and has great closing speed, then Mississippi State’s Taveze Calhoun is your guy.

I was so impressed watching tape of this guy. It’s scary how good this guy could be at the next level thanks to his work ethic, film study, speed and willingness to throw his body around to make some plays against the run and the pass.

Right from the jump I knew I’d love this guy based off of how physical he was on the boundary.

Watch this play from 2014 against Ole Miss in the Egg Bowl.

Everything he possesses is on display here. He knows that the swing route out of the backfield is coming, so he’s able to turn on the jets to close in on the running back. Once he’s in position, Calhoun is able to lay the wood to separate the receiver from the football.

His physicality and strength is on display just a few plays later against Ole Miss. Donte Moncrief, who currently catches passes for the Indianapolis Colts, runs into the buzz-saw that is Calhoun.

Look at the sheer power and the impressive closing speed on this Calhoun body slam.

Not sure what more you need to see from Calhoun in terms of his ability to diagnose a play and close quickly to make the play.

Finally, one last clip of Calhoun that really impresses me.

As a man-off corner, Calhoun is expected to keep everything in front on him and then make the tackle for minimal gain here against Alabama.

Sound familiar? A certain defense in black-and-gold deploys a similar system with their CBs. Calhoun rarely misses tackles and rarely gets beaten deep.

He’s a solid cornerback that will continue to climb boards as more and more eyes fall on his game.

If I had to do a CB ranking of the top five prospects at that position right now, Calhoun would be in the discussion for No. 4 behind Vernon Hargraves, Harlan Miller, Mackensie Alexander and William Jackson III; that’s how much I like and believe in Calhoun.