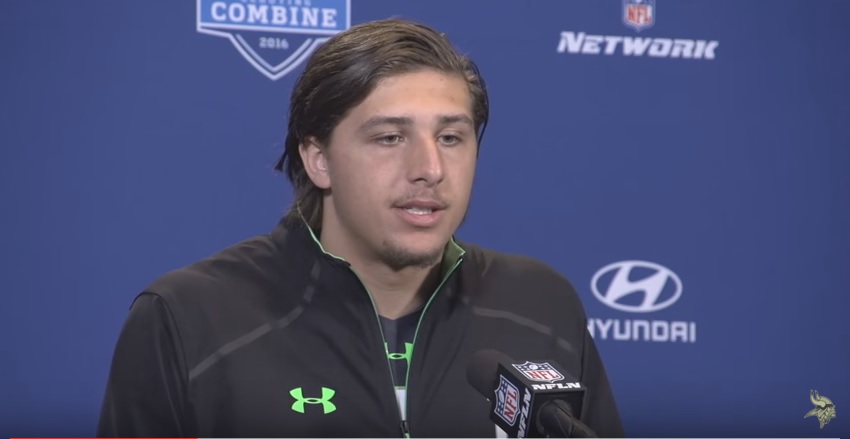 Another tight end to start off the week. Stanford’s Austin Hooper.

-Effective in-line blocker that uses legs well to drive opponents out of the hole
-Big, strong hands that let him high point the football in traffic
-Versatile tight end who can line up anywhere on the field
-Excels as an in-line TE, allowing him to get out into route precisely
-Excellent hand-eye coordination, rarely drops the football
-Uses frame well to shield defenders away from the catch point
-Impressive production in pro-style offense at Stanford
-Large, muscular frame for position

-Can get caught flat-footed at times as a blocker in space
-Doesn’t create extension when blocking to keep his opponent out of frame
-Struggles to create separation as a route runner
-Needs to work on running crisp, precise routes at next level
-Doesn’t have great play speed despite 4.72 40-yard dash at Combine
-Take some time to build up speed off the line
-Tends to duck his head as a blocker, leading to whiffs at second level

Standing 6-feet-4 and weighing in at just a hair over 250 pounds, Stanford’s Austin Hooper has the ideal size and length for a tight end in the NFL.

Like most of the tight ends in this year’s class, Hooper comes from a pro-style offense at Stanford. While a member of the Cardinal, he was used as an in-line tight end, as well as a move tight end, utilizing his size and large catch radius as a mismatch on the outside.

Despite being used as a move tight end at times, Hooper appears far more comfortable as an in-line tight end where he’s a strong blocker at the point of attack and a serious threat in the middle of the field coming off the line against linebackers and smaller safeties.

In a class bereft of talent at the tight end position, the fact that Hooper is a strong blocker that loves contact and uses his frame well to box out opponents could lead to an early selection in the 2016 NFL Draft, April 28-30.

As a blocker, Hooper uses his lower body really well to drive opponents out of the hole in the Cardinal power rushing attack.

Take a look at this clip of Hooper on the road in South Bend during his redshirt freshman year against the Fighting Irish.

Tasked with down blocking against Notre Dame’s Isaac Rochell, Hooper gets a good jump off the ball, comes off low with power, fits into the down block and moves Rochell out of the hole, allowing quarterback Kevin Hogan to scamper in for the touchdown.

What impressed me the most on this play was the power that comes from Hooper’s lower body as he drives Rochell down the line. Usually with a tight end in this situation, you see a stalemate, but Hooper bucks that trend by showing impressive leg drive.

Later on in the game against Notre Dame, Hooper shows good lateral quickness and above-average awareness as a blocker by jumping from a chip block at the line to swing back around to pick off Michael Deeb as he blitzes off the edge.

I can safely say I’ve never watched a tight end do that, including Heath Miller. It might not jump out to the average fan on tape, but by getting off the chip block to slow down the edge rusher gave Stanford’s Ty Montgomery room to pick up some extra yardage in a tight game.

While he is impressive at times as a blocker, there are other times where he just fails to bring his lower body while allowing the defender to get into his frame.

Look at this clip against USC this past season at the Coliseum.

Hooper does a terrific job of getting to the second level quickly to seal off the Trojan linebacker, but following a great punch to initiate contact, Hooper fails to create extension with his arms. From there, he stops his feet and allows the defender to slide off of his block.

Granted, the linebacker doesn’t make the play, but I’d like to see some finish from Hooper on blocks like this.

Outside of Hooper’s blocking tendencies, he’s a raw receiving threat that utilizes his size well. With that said, he struggles to create separation at the top of his stem on a consistent basis.

Take a look at this clip against USC this past season.

Lined up as a move tight end in this sequence, Hooper doesn’t get the greatest release on the route and creates very little — if any — separation from his defender, which allows the safety with over-the-top coverage to slide behind him as the defender matched up with him off the line is able to slide underneath Hooper, making it hard for Hogan to fit the ball into Hooper’s window.

The Trojans deployed zone coverage here, but Hooper didn’t fool anyone with his route.

However, Hooper does a great job of using his height and catch radius to high point the football between two defenders to make the tough catch. His big, strong hands come into play here as well as he’s able to rip the ball out of the air to make the catch in tight coverage.

In terms of consistency, Hooper was hit or miss as a route runner during his two years at Stanford, but towards the end of his career things seemed to really click for him.

He’s not going to blow by anyone with great play-speed or great route running due to quick feet that will leave defenders in the dust, but at the next level if he can run routes like this across the middle of the field he’ll serve as a great complimentary piece on a good offense.

On this play, Hooper doesn’t sell his route from the get-go, which allows him to get in and out of his break quickly, creating ample separation from the Notre Dame linebacker to pick up the first down.

This is just a simple route for Hooper, which is a staple in the Stanford offense.

He showed similar abilities earlier in the year at Northwestern, but it wasn’t until later in the year that he continued to show this type of route running on a consistent basis.

Overall, Hooper is very raw for the tight end position as a route runner, but he was able to produce at a high level for a loaded Stanford offense.

If I were to draft him, I’m not using him as a move tight end due to his limited burst, inconsistent technique on routes and his less-than-adequate build-up speed, but if I’m looking for an in-line tight end that can stay on the field regardless of the situation, Hooper isn’t far behind Arkansas’ Hunter Henry.

You can’t expect Hooper to step in from day one and put up great numbers like he did at Stanford. Patience has to be exercised as he gets used to the NFL game.

That being said, the physical and mental tools are there for Hooper. He’s a guy that — with the right coaching and the right amount of time allowed for development — can pay big dividends down the line for the team that drafts him.