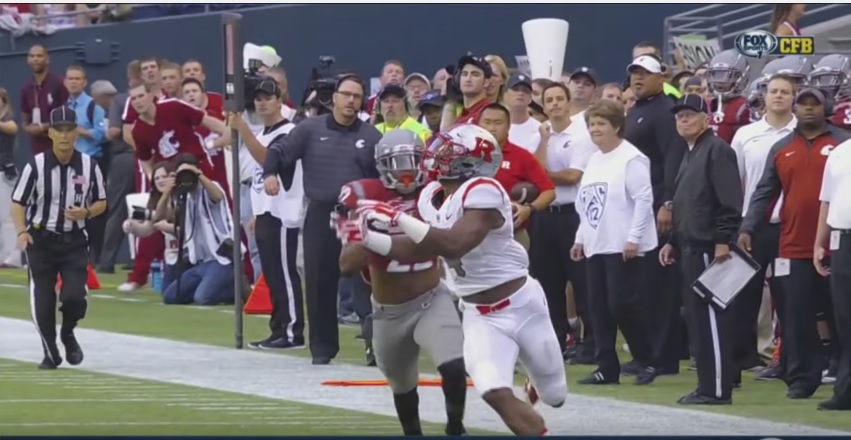 Our second receiver prospect of the day. Rutgers’ Leonte Carroo.

-Willing blocker who locks up with defenders on the boundary
-Gears down quickly on comeback routes, gets head around quickly to find the football
-Great awareness as a route runner
-Knows when to adjust route trajectory to work himself open
-High points football very well despite small stature, underrated leaper
-Physical WR that fights for every football in the air
-Flashes great hands when needed
-Excels at comeback routes, crosses and go routes in play-action offense
-Consistently productive receiver to go along with a high usage rate
-Uses solid double-moves and head fakes to his advantage within stem
-Crafty route runner

-Can be squeezed off of route down the sideline by physical corners and safeties
-Has a little hitch in his get-off at the line that needs corrected
-Catches the ball a ton with his body, needs to learn to use great hands more often
-Doesn’t have overly quick feet, which gives him trouble getting off the line
-Slow to get off the line for a receiver
-Can disappear at times in games
-Doesn’t create a ton of separation at top of stem
-Tends to round off routes
-Injury prone receiver

Personally, I’m a big believer in his style of play at wide receiver, but there are plenty of issues with his style that might give him issues transitioning to the NFL.

For starters, Carroo has marginal long speed and struggles to create separation out of his cuts at the top of his stem, but he’s a crafty receiver who tends to consistently win on comeback, go and crossing routes.

That being said, it takes some time for him to get up to that marginal long speed and he really struggles to beat the press cleanly off the line due to a lack of quickness in his feet and a slight hitch/hop off the line, which throws off timing in his routes.

Fortunately for Carroo, he’s a crafty receiver and consistently gets open while possessing a great awareness when running routes.

Take a look at this clip against Tulane in 2014.

On the crossing route, Carroo has the awareness to see he can get behind the Green Wave’s defense, allowing quarterback Gary Nova to float the pass over the Tulane secondary for the score.

Carroo has a knack of doing this on crossing routes, which seems to be his forte as a route runner.

Of the receivers that I’ve watched so far this year (Corey Coleman and Tyler Boyd), Carroo is the only one who has shown the willingness to adjust his route trajectory in the process of running it, taking advantage of what is happening around him with the defense.

That’s a veteran move by arguably the best receiver to ever come out of Rutgers.

While he flashes impressive hands on the touchdown catch, Carroo largely catches balls with his body, which is concerning heading into the NFL.

However, Carroo has great hands, so it’s puzzling as to why he relies on body catches.

In all three clips, Carroo shows strong hands and a nice catch radius for a guy with short, stocky arms as a receiver.

In the first clip, he reaches down on the out route along the sideline for the tough catch. That’s a hard play to make for an NFL receiver, but Carroo makes it look easy due his big, strong hands that just reach down and pluck the ball out of the air.

Against Maryland, Carroo squared off with Sean Davis, who Luc Polglaze profiled earlier this week.

The Rutgers receiver had a strong day, and these two plays solidified that.

Despite being just 5’11”, Carroo has tremendous hops; it shows here in the second clip. He’s able to get up and rip the ball out of the air for a big first down for the Scarlet Knights.

The best catch I’ve seen him make was this one against Maryland as well. Look at the ability to just flick his left hand out there for the one-handed catch along the sideline.

Hands aren’t an issue at all with Carroo despite the concern with the high percentage of body catches he makes. With 9 3/8 inch hands, he’s able to pluck the ball out of the air with ease. He just needs the right coaching staff to break him of his reliance on body catching.

Carroo also possesses great body control, which allows him to torque his body in a way to go up and fight for the ball. He has a fighter’s mentality in the air when it comes to the football, too.

Look at this against Ohio State in 2014.

That’s a great job of not quitting on the play, rising up over the defender and simply ripping the ball away. He’s a strong guy who should test really well at the Combine, which makes me think his stock is going to rise.

Overall, I do like what Carroo brings to the table as a heavily-used receiver out of Rutgers. He was the lone weapon that scared opponents on that offense for the last two years — outside of Tyler Kroft — and he consistently produced at a high level, scoring nine, 10 and 10 touchdowns the last three seasons, including two three-touchdown games in 2015 against Indiana and Michigan State.

However, I don’t see Carroo as a No. 1-type receiver in the NFL. He’ll be a solid complimentary No. 2 possession receiver or a No. 3 in a loaded offense who will be a chain-mover out of the slot.

Outside of his play on the field, there are tons of off-field issues based on his domestic violence arrest in September (charges were dropped) and his season-opening suspension for a missed curfew.

Teams will have to do their due-diligence on him, but I think he’ll test well and blow away teams in the interview process, which makes him a lock for the late second-round.