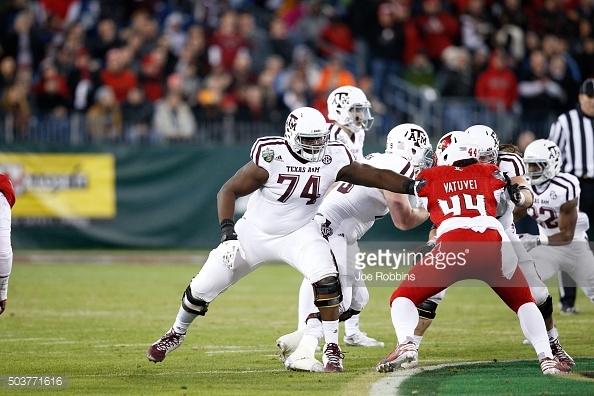 -Quick, choppy feet to set the edge in pass protection
-When he drops his anchor in pass protection he’s hard to beat
-Impressive hand strength to latch onto pass rushers
-Does a good job of keeping backside between QB and opponent
-Works to the second level well as a run blocker

-Allows inside penetration too easily off the snap
-Labors to shuffles laterally to keep up with bend and rip of pass rusher
-Doesn’t keep his base underneath him at all times
-Leans into blocks too often
-Seems content with a stalemate instead of looking to dominate opponent
-Prone to getting overpowered by power rushers
-Slow to shoot hands to create separation
-Stops his feet at point of contact
-Not a physical offensive lineman lacks a nasty, punishing streak
-Rarely punches out at defender, would rather catch and latch onto defender once into his body

Usually when it comes to analyzing prospects I try to come in with a clean slate and see things for myself.

Fortunately (and unfortunately) for Germain Ifedi, this was the first time I watched film of him. Hopefully I never have to watch him again.

For the entire first-round buzz he is generating due to his massive frame and long arms, Ifedi is not a good offensive lineman.

I just don’t see it with this guy. Right now he’s borderline undraftable for me.

Sure, his size will have people enamored with him, but just put on the tape of him at right guard for the Aggies in 2014 and 2015 and it’s pretty clear that he is vastly overrated.

Granted, he went to College Station as a highly-recruited guard before being moved to right tackle, but the supposed athleticism he had inside is long gone.

Take a look at this clip from 2014 against South Carolina.

Remember, Ifedi was once a guard that excelled at pulling. Well, what was this exactly?

The guy is a giant in space and should be looking to bury people, but this clip makes it look like this was the first time he’s ever pulled. Plus, he isn’t even seeking out contact.

He has a chance to bury the Rebels’ safety and he just pulls up. Ifedi is lacking that nasty streak that every good-to-great offensive lineman possesses. It’s just not there with him. I’ve yet to see it, and I would be willing to bet I never will from him.

While he isn’t a physical corner and the athleticism isn’t there at all times with him, he does show flashes of developing into a solid tackle in the NFL.

I was really impressed with the way he handled this stunt against Alabama in 2014.

He’s able to establish his base and punch the initial pass rusher inside into his guard while being able to keep his balance to pick up the stunting interior defensive lineman. This is how passing off a stunt is supposed to be done.

All of that goes out the window and Ifedi just completely misses the stunt and gets his quarterback killed.

His feet might be quick and choppy off the ball, but in space like this it really hurts him. He’s unable to recover quickly enough to cut off the stunting defensive lineman.

Not only are his feet poor, but his base is very inconsistent.

At times, Ifedi is able to anchor really well and stalemate against a pass rusher, but there are other times where he’s too high and has little balance, opening him up to serious power rushes like this.

That will only get worse at the next level.

Finally, the worst play I watched Ifedi have a hand in while watching film.

He tends to lunge quite a bit at his opponents, and this one backfired in a major way against Ole Miss this past season.

When you lunge and don’t bring your feet, you tend to get embarrassed. That’s exactly what happened to Ifedi here.

Overall, I’m very unimpressed by Ifedi. He should have gone back to A&M for his final year in hopes that he’d put it all together and improve his draft stock.

I get the hype in terms of his frame and arm length, but there’s too much ugliness to think this guy is even worth a draft pick at this point.

I’d be very hesitant to take a chance on him before the seventh round unless I felt that I could afford to have him sit for a few years to work on his craft.

He’s a major project, and one that might not be worth investing in this year.