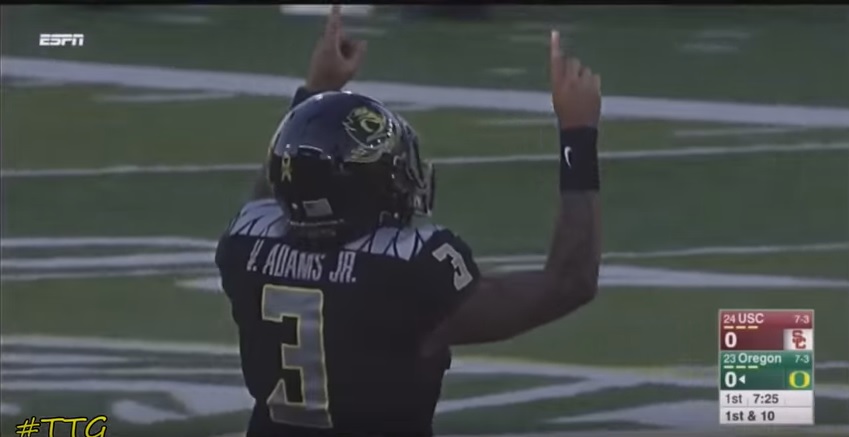 Our second quarterback profile in as many days. Oregon’s Vernon Adams.

-Lower half is inconsistent as a passer, feet can be all over the place
-Struggles with accuracy and touch on the run
-Prone to batted passes at the line due to short stature
-Tends to throw across his body when on the run
-Has an issue falling away from some throws when pressure is bearing down on him
-Small hands for QB
-Doesn’t appear to have much anticipation
-Undersized for position

On tape, Vernon Adams Jr. is an electrifying player for the quarterback position.

He showed that over three years at Eastern Washington and through one injury-riddled year at Oregon.

It’s easy to label Adams as a dual-threat QB thanks to his nearly 1,400 rushing yards in college, but he’s far from that.

That’s not to say that Adams can’t make plays taking off should a play break down; it’s saying that he’s a passer first, always keeping his eyes up scanning the field looking for a receiver to throw to while avoiding pressure.

By keeping his eyes up and extending plays in the process, Adams has a knack for creating splash players for his receivers down the field, allowing them to work open deep so that Adams can find them.

While he routinely does this game-to-game, Adams struggles mightily with accuracy and touch on deep throws, often throwing the ball 5-10 yards past his receiver.

Despite having issues with accuracy and touch on deep balls, Adams really excels as a short-to-intermediate passer, showcasing his powerful arm and strategic ball placement.

However, standing just 5-feet-11, Adams has plenty of limitations as a passer. Throughout his career, Adams had a tough time staying in the pocket, resulting in poor mechanics, a wild lower half and the inability to get throws off cleanly due to his short stature.

That resulted in a lot of batted balls.

On top of that, Adams struggles with anticipation and often misses throwing windows because he’s late to see them.

Despite being a mobile QB that can extend plays with his feet and strength as a runner, Adams can often get swallowed up in a pocket, resulting in poor mechanics as a passer rushing to get the ball away.

Adams does a nice job of climbing the pocket, but once the pressure comes towards him from the front, everything Adams does goes to hell in a hand basket.

His arm angle drops down; his feet are all over the place and he doesn’t even step into the throw.

He makes a habit of falling away from throws, but there are times where he just leaves you dumbfounded with some of the throws he makes.

That has to be one of the best throws on the run I’ve seen in quite some time from a college quarter.

Not only does Adams extend the play by getting out of the pocket, but he keeps his eyes up, tries to get his shoulders and hips square to the line of scrimmage as best as possible and just uncorks a missile for the touchdown.

Plays like that leave you thinking he has serious potential in the NFL.

Then you see this one and the belief continues to build.

There’s the awareness of the rush, the quick feet and hips to avoid the defender, scooting to the perimeter and then a strong arm and great ball placement for the big gain, dropping the ball right over the defender.

He’s able to avoid the rush multiple times and still keeps his eyes up to find his receiver down the field. A better throw towards the hash marks likely leads to a touchdown, but that stuff can be worked on.

You can’t teach athleticism and awareness in the pocket.

However, he’s so inconsistent that plays like this rarely show up again in the same game.

Adams’ mechanics are so spotty as a passer that it’s easy to label him as a project.

The arm strength is there as a passer, but he is very lax on his mechanics, leading to plenty of missed opportunities.

Similar to the play against Washington, Adams has a chance to do it again against Oregon State, but he fails to set his feet, doesn’t step into the throw and basically throws across his body, resulting in an incompletion that could have gone for a big gain.

When Adams has time he works through his progressions very well and shows plenty of patience as a passer.

If he were a QB that looked to run as often as possible, he’d likely have tucked it here in the red zone. But with a clean pocket and no sense of urgency, Adams scans the field over and makes the right play.

I’d like to see him get into a more traditional offense where he has the time to scan the field behind an NFL line that can hold blocks for longer than 2-3 seconds like the lines at Oregon.

I think the awareness, high football IQ, competitiveness and ability to take what the defense is giving him is there.

He just needs some more coaching and needs to bulk up just a bit to withstand some hits he’ll take as a QB that can get out of the pocket to extend plays.

He’s not a top five QB in this class, but I wouldn’t say he’s far off. He’s raw coming from high-octane systems, but the tools are there to work with. It’s now up to the coaching staff he lands with to mold him into an NFL QB, whether that’s as a starter or a trusted backup option.