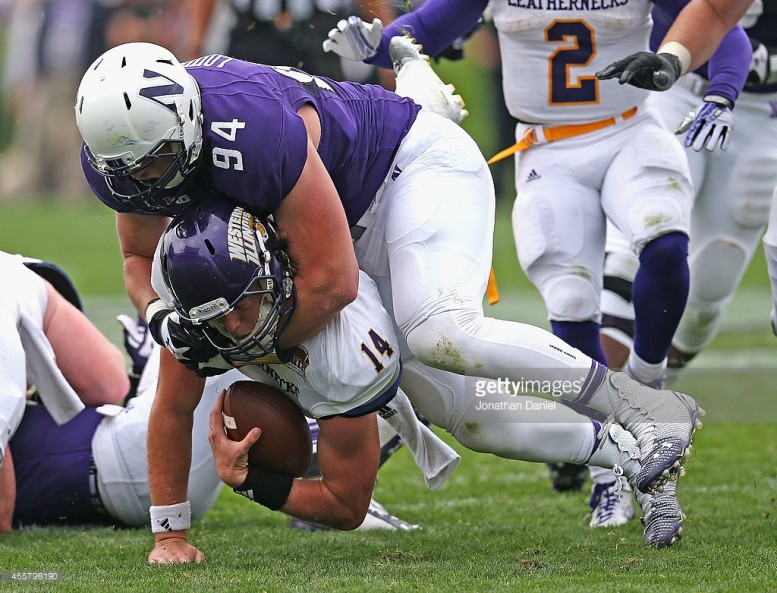 – Surprisingly fluid hips in zone drops
– High motor
– Agile in short space to be able to execute twists and stunts
– Plays across the line: 0t, 1t, 3t, 5t, 7t
– Play strength improved from 2014 to 2015
– Quick off the snap, aggressive slanting
– Hits open gaps hard downhill
– Smart player, reads the field well
– Quickness over gaps can be too much for OL to handle
– Has also played OLB in two-point stance

– Short arms really limit him, gets swallowed by length
– Loses his feet out from under him, loses power
– Hands aren’t active enough to counteract his short arms
– Creates on initial pressure/wins, doesn’t have the ability to recover
– Can’t generate enough torque for an effective spin move
– Pass rushes without a plan too often
– Limited pass rush toolbox

This is the quintessential Lowry play. The weakside 3t here, Lowry gets a good jump on the ball and powers into the tackle. However, the long arms on the tackle and his anchor mean Lowry is initially eliminated, and to further complicate things he ends up getting tripped by his own man. However, he recovers, flashes his eyes into the backfield and sees the ensuing checkdown. He has the hustle to come over and lay out the RB, but his limitations are obvious on this play.

Lowry is an unusually limber prospect. To be able to hit a quick backpedal and flip his hips to ride the zone downfield is impressive for a defensive lineman of his length. Normally you see longer defenders struggle to sink their hips and find that measure of fluidity, but Lowry had it in spades here.

Lowry matches up over the TE here, and wrecks him to make a TFL. Note the hand placement and power Lowry generates, already worlds better from his 2014 work. He then sheds to the correct side and drops the running QB. This was a TE he was facing, but it’s exactly what you want to see from the DE in terms of technique.

Lowry picks up an interior rep from 1t. He splits the double team with a rip into the open gap and closes to the QB. When he gets off the ball at top speed, his arm length doesn’t matter as much.

Lowry slants inside from his LDE position as the LB scrapes outside. He keeps his hips parallel to the line of scrimmage and eyes on the ball carrier as he was taught, before he sheds the weak block and closes downhill. Patience, discipline, then attack.

Violence in a short area. That’s what Lowry flashes here, with quick hand disposal of the tackle. Again he bursts in the short area to take down the running back for a TFL. These aren’t just tight ends he’s cleaning up against now, it’s Big Ten offensive linemen.

Dean Lowry is an enigma. On one hand, you have a weight-room strong player with great length and size who’s quick on the field. On the other hand, his arms are so short as to truly limit him at the next level. Lowry has a lot of room to grow as a pass rusher, with a limited array of moves and often a lack of a plan.

At times, though, those 30 bench reps just don’t show up. His play strength is nowhere near where it should be thanks to that, mostly because his footwork is sloppy at times and leaves his body stranded with his feet trailing. Because of that, his base is weak and he can’t translate knee bend to upper body power.

Although he played across the line in college, Lowry projects best as a 5 tech in the NFL. That allows him to play slant-to-gap from head-up on a tackle at defensive end. He absolutely looks and weighs enough to play the part there. Athletically, he isn’t any great shakes, and those short arms will limit in the NFL. His ceiling is capped at a consistent starter, but he definitely has the on-field flashes to back that up.