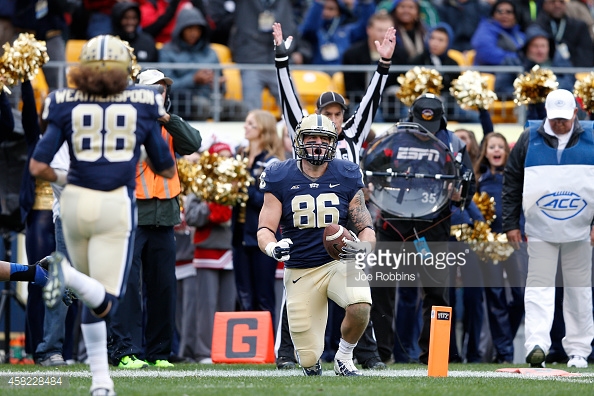 – Lazy route runner when he’s the decoy
– Needs to fix his hands and pads to be parallel when blocking, gets beaten by push/pull moves
– Slow laterally
– Can’t generate much up the seam, doesn’t have the speed
– Goes down too easily in open field
– Allows himself to be re-routed too easily

– Started 48 of possible 52 games
– Totaled 81 receptions for 931 yards and 11 TDs in college career
– Played in the NFLPA Collegiate Bowl All-Star game following senior year
– From Pittsburgh, attended Shaler Area HS
– Selected as a team captain in 2015
– Played quarterback, running back, wide receiver, tight end, lineman, linebacker and punter in high school
– Rated the #10 TE prospect in the country by Scout.com
– 4-year letterwinner in high school in both football and basketball

Lined up slot right, Holtz has a simple dig route. He does a good job staying behind the dropping MIKE and actually has the safety beat here. However, you can tell that his athletic ability limits him and he just can’t generate any explosion out of the break.

Holtz actually makes some impressive catches. Slot left, post route. Easily the quickest he looked off the line, shields the defender from the ball and makes the catch on a 4th and 15. Great play and unexpected for a blocking TE to go down the alley like that.

Where Holtz made his bones in college, and likely will in the NFL too, was blocking. On-line right, he absolutely stonewalls Hawkeye Nate Meier on the pass rush. There’s no real size difference between the two, just an offensive lineman-like anchor from Holtz.

The H-back left, Holtz cleans up on this DE. As soon as the end crashes inside and gives up his shoulder, Holtz latches on and takes him for a ride downfield. He does disengage a little too early, I would’ve liked to see him finish that block more fully.

Setting aside the illegal formation, Holtz makes a mystifying block. The ‘backer is reading the handoff the whole way and never sees him coming from his up-back position left. If he wanted to, he could have rocked this guy’s world. Instead, he ducks and lunges off-center, completely missing any significant impact.

I show this gif for one reason, and I’ll let you figure out what reason that is. Even though he whiffs on the chip coming out of the backfield….he mows that Hurricane defender (talented DB Corn Elder) like a lawn.

The NFL can never have too many blocking tight ends. That’s a simple fact, and no matter how much it transitions to a passing league, a big man who can catch a little and block a lot more will always be valuable. J.P. Holtz is that player in its truest form.

Does he have athletic upside? No, he’s pretty capped as what he is. Very restricted laterally, some burst off the line but not much to stretch the field vertically down the seam. Decent routes for a TE, some room to improve the crispness of them when he’s running to set up the play. Hands are good enough to allow him to see the field on passing downs.

His blocking is really where he shines. He can go 1-on-1 with edge players in pass reps and mirror them, shutting them down from reaching the QB. Run blocking isn’t as strong for him as it involves working into space and finding a target, which is something he struggles to do. But his leg drive has taken several good blocks and made them great ones, a translatable skill to the next level.

However, without room to grow athletically, Holtz is about as NFL-ready as he’s going to get. The physicality and skills that he has make you love him as a #3 and make you comfortable developing into a #2 tight end. Ultimately, those render him draftable, although he’s very close to his athletic ceiling. For that reason, he doesn’t have a lot of development to do at the NFL level, and although he looks the physical part of a red zone threat, doesn’t have the explosiveness or catch radius to play that role. He can easily find a home in a offense that will put his blocking skills to good use as well as sneak him out for a pass in space.