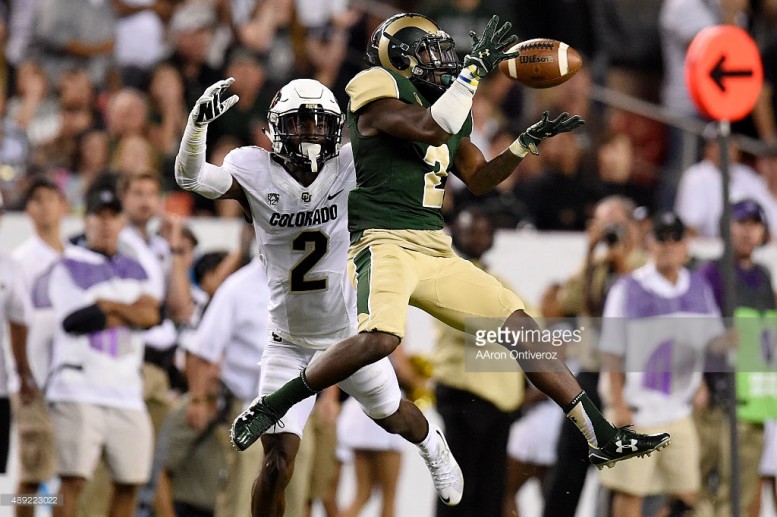 A look at another cornerback. Colorado’s Ken Crawley.

– College corner disinterest in mixing it up against blocks
– Lacks patience waiting for receivers to stem
– Allowed far too many scores; 19 TDs over four-year starting career
– Jogs plays out if he thinks the tackle will be made
– Struggles in man with scheme and trail
– Effort questions, doesn’t always play through the whistle
– Tackling is questionable
– Called for 12 pass interference calls in last two years

Crawley is at the top of the screen. Note his hips against this vertical release with a downfield stem. This is extremely well-played. “Pedal until he plays” technique waiting for the receiver to declare a stem.

Even though this is a run play, it still matters how Crawley plays the release from the receiver as if it were a live pass. Again, Crawley has an extremely fluid backpedal and smooth hips. However, he struggles reading the receiver. The receiver takes an extended seventh step, which almost always signifies an out-cut. Crawley has already flipped his hips and gone vertical though, and is a hair slow to close on recovery. He’ll need to wait for the receiver to declare his route before reacting like this.

Crawley is playing off the TE in a 3×1 set. You can tell he’s watching the ball the whole time as the offense pulls the C and RG. However, his quickness beats both of them and he hits Daniel Lasco for the four-yard loss. You don’t often see corners get asked to blitz like this, and Crawley makes the most of it.

Crawley has length, and he uses it well. Here, he locates the ball just after Rashard Higgins, and elevates to jar Higgins and play through to the ball. This is a good job of using his physicality to his advantage and knocking the ball down.

Illegal downfield pick route aside, Crawley does a good job keeping his eyes on Higgins and chasing him after getting jarred off. He takes a good angle and has the speed to get there, but has no interest in making the tackle once there. Corners need to tackle downfield in the NFL, and Crawley failed to do that here.

Colorado has pre-snap confusion here as they’re not sure what they’re running. Crawley ends up without help over the top. However, he plays as he’s trained, stays in the back pocket of the receiver and plays the hands of the receiver to ensure he doesn’t make the catch.

The Colorado Buffaloes have been the doormat of the PAC-12 since its most recent expansion, and it’s not hard to start with the lack of talent on the roster. That said, Ken Crawley has consistently stood out on the team since his freshman year with his cornerback ability and length.

Crawley tends to try to anticipate routes too much when he’s best served just reacting to the receiver. He guesses, thinks he knows where the play is going, and then doesn’t have the recognition in closing to come downhill to the receiver. The best way to put it is this: Crawley is smooth into his backpedal, but not out of it. All too often, Crawley is out of position because he put himself there and bit or guessed wrong.

Crawley lacks a bit in play strength, but makes up for it with some nice reaction fire after getting beat on a play. He plays to his size and fights for the ball when it’s in the air. He doesn’t seem to have the awareness to keep himself clean in the open field consistently (let himself be walked into multiple pick routes), which is going to be a problem in the NFL.

However, the biggest problem is his stats. His tackling numbers are pretty consistent on a defense that mostly asks their boundary corners to play deep or man and rally up to the ball; it’s the grabby pass interference penalties and touchdowns allowed that give cause for concern. Crawley has the Height/Weight/Speed triangle set up very well (with a top-10 40 yard dash at the combine) and high potential with his fluid hips. He’ll need to be careful in the NFL with his backpedal to keep it low, but he’s set up for success at the next level.