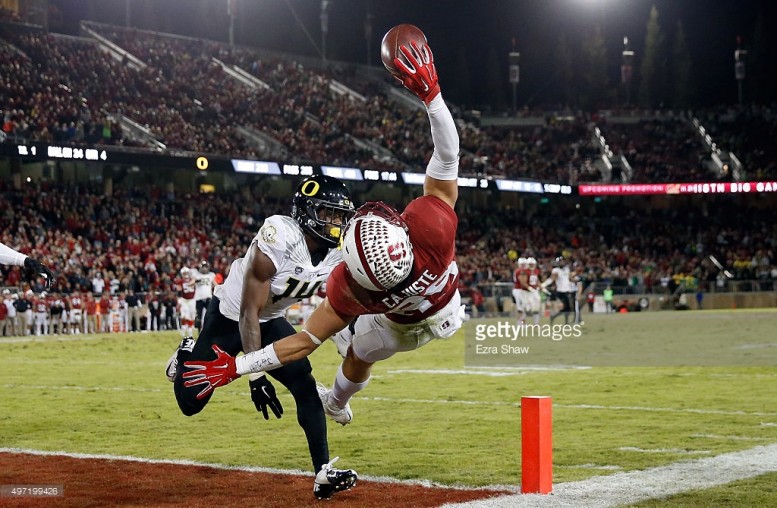 Like many college WRs, Cajuste tends to have some inconsistent reps when blocking. Blocking is truly a lost art for perimeter players in the college and high school ranks, so it’s rare to see anybody stand out all around much less flash any fire.

Unfortunately, this is what far too many of his snaps look like from 2014. Absolute whiff in space on the outside CB, who forces the incompletion. That’s a missed block that wrecks the rest of the play.

However, that effort shows up in spots on his tape and will mature so much in 2015. Here, Cajuste initially engages well, shooting his hands inside and driving his cornerback downfield, although he gets swung to the sideline. He recovers and absolutely ragdolls his corner onto skates. This is the kind of effort and blocking ability that you want and hope for from a receiver of his size.

It’s evident in 2015 that Cajuste invested some time and effort into the blocking facet of his game. His play strength is much improved, his angles are more advanced, and he shows just plain better desire to block.

Here, the CB lined up over Cajuste starts creeping inside showing a slot blitz. Cajuste knows he has the safety squatting the sticks in coverage. He challenges the body of the DB with a vertical stem then fakes outside quickly with a quick foot and head fake before cutting across his body. He has him beat completely cleanly, but QB Kevin Hogan targets the deep comeback across the field. This isn’t an ankle-breaker of a route that would make the national highlights like something from Antonio Brown, but it’s exactly what this play required.

Cajuste’s route-running and open-field speed abilities are what create him the space here, but note his adjustment to a poorly-thrown ball. He has to almost backpedal straight downfield to make the catch between the oncoming safety and recovering LB. Really impressive stuff.

If you’ve got a red zone threat like Cajuste, it makes perfect sense to line him up alone outside the hashes to the field and just throw it up to him in the end zone. After all, this is the role you’ve given him to play. This isn’t much of a route at all, in fact, it’s more a “go run out and sit” play. But Cajuste elevates, boxes out and comes down with it. And yes, he did play basketball in high school.

Cajuste is an enigma to project to the NFL. Although he played WR in college, his body type would probably suggest usage more in line with TE or H-back. What’s interesting is one listing has him at an identical height and weight to Eric Decker of the New York Jets, while others put him heavier by about 15 pounds.

Although he projects better for a role that brings him in tight with the formation more often, that ignores his struggles with blocking. Although he has shown some true aggression and downfield blocking, that is inconsistent enough to give me some reasons for pause when projecting him into a role that will call for him to rely on that. His 12 reps at the combine bench don’t help either..

In addition, an H-back role doesn’t really do full credit to all of his red zone and route-running abilities. He is a weapon when attacking downfield, where he can track the ball and box defenders out to make the catch. It’s hard to imagine a guy being used to trap across the box on a run play, then split alone wide to run an end zone fade on the next. However, if there’s anybody who could pull it off in today’s NFL with the emphasis on versatility, Cajuste might well be my selection. I think he’ll make a far better NFL player than college considering his catch radius if nothing else.

Plus, I’d draft him just for this.

The key to Cajuste is he doesn’t do anything at an elite level, just at a very good level. His hands? Good, not great. Does he have a second gear? No, he’s limited. Athletically, he compares very favorably to Devin Funchess (himself a second-round selection) at a similar size:

I think Cajuste will be an early Day 3 selection just because of his size and skillset. Although he’ll never be a top 10 NFL receiver, he could easily carve out the “big WR” niche on multiple NFL rosters and be a dynamic red zone threat quickly.