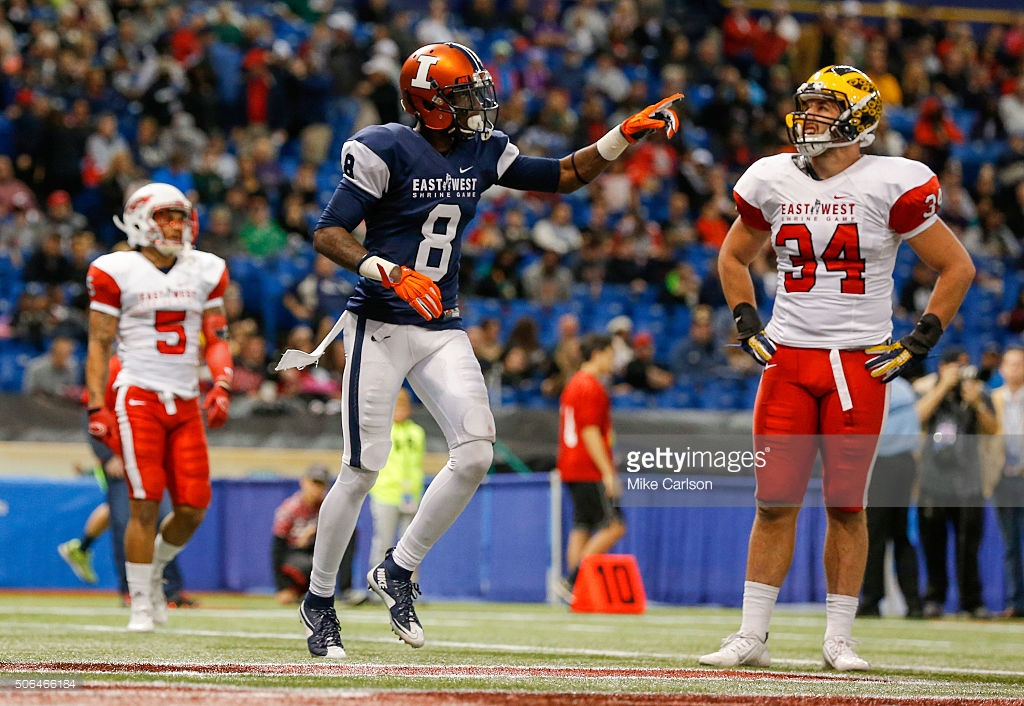 -Gets vertical quickly with long strides, quick burst off the line
-Able to beat press coverage with quick feet and strong head fakes
-Good feel for what CBs are trying to do to him
-Can adjust routes quickly to work open
-Underrated runner after the catch that doesn’t go down easily
-Strong hands to pluck balls out of the air
-Ideal height, weight and arm length for position

-Poor effort as a run blocker, doesn’t seem to want to engage in contact if he doesn’t have to
-Tends to round off his routes, making it easier for CBs to close quickly
-Lack of deep speed allows CBs to sit on underneath routes
-Has an issue with drops and consistency snap-to-snap
-Struggles to create separation in and out of cuts
-Stiff hips for a receiver

At first glance, Illinois’ Geronimo Allison has everything you want in a wide receiver. The senior has the ideal height, weight, arm length (which leads to a large catch radius) and big hands. But once you put on the tape you see a wide receiver who is getting by on just his natural abilities instead of trying to master his craft.

Before heading to Illinois, Allison didn’t play football during his sophomore and junior years of high school. Finally deciding to play during his senior year, Allison was an under-the-radar receiver that had to go the junior college route just to get noticed.

While at Iowa Western Community College, Allison blew up in a big way while leading the Reivers to a national championship in 2012. During that time, Allison started to attract big-time college football attention, which then led him to the Fighting Illini, where he become the No. 1 target for incumbent QB, Wes Lunt.

With his size and strong hands, Allison put together a good career at Illinois, but a limited route tree, focus and consistency issues snap to snap and lack of breakaway speed left analysts — as well as fans — wanting more from the 6-feet-3 196-pound receiver after his final two years with the blue and orange.

Now heading into the draft, more questions are attached to Allison as he works towards his goal of playing in the NFL.

Let’s start with the consistency and effort issues.

While nobody is going to mistake a wide receiver for a punishing run blocker in today’s game, Allison has all the physical tools to at least be a salvageable blocker at the next level.

But issues with effort and consistency gets in the way of him really showcasing just what he can be at the next level.

Take a look at this effort as a blocker against Nebraska this past season.

That’s very, very poor for a guy that some see as a willing blocker. I don’t see that at all. Granted, that’s one clip. However, there are other times that he just doesn’t give max effort, which sometimes leads to his guy making the play.

The effort and consistency issues translate to his work as a pass catcher as well.

During the 2015 season, Allison racked up a drop rate of 11 percent, which is very concerning for a guy who was the top target for the Fighting Illini. A lot of times, Allison lets the ball get into his body, where it tends to clang around and fall to the turf. But there are also times where his hands just fail him.

On top of drop issues, Allison allows himself to get crowded near the boundary far too often. While he does have a great feel for where he’s at on the field and has excellent footwork, he needs to learn to play through contact and get to his spot on the field more often.

In this clip here against Nebraska this past season he does a great job of running through the jam to get vertical, but it’s very rare.

You’ll notice in some of the following clips that most of his catches are on or near the sideline.

With a limited route tree, Allison should have been able to perfect the routes that he ran exclusively at Illinois, but that just wasn’t the case.

Far too often the senior receiver rounded off his routes.

While both resulted in catches (one for a first down, one for a touchdown,) Allison has to clean this up at the next level, especially based on the fact that he’s not a serious vertical threat, which allows opposing CBs to sit on his underneath routes.

On top of not being much of a vertical threat, Allison has minimal explosion in and out of double moves.

Allison has a great initial burst off the line, but this is a clumsy attempt at a double move. He needs to sell this much better by sinking his hips, coming to as close to a full stop as possible, getting the CB to bite before then picking his head up to turn on the jets.

That just doesn’t happen here, and a big reason why the CB doesn’t bit is because Allison just doesn’t sell it.

If he were to have sold this a little bit better, Allison is probably running free behind the Penn State secondary for a TD, but the corner stays with him, forces him to the sideline, which leads to a harder throw for Lunt.

Overall, with the right coaching and the right discipline at the next level, Allison could develop into a solid No. 3 receiver who could pose as a major red zone threat with his large catch radius, strong hands and ability to high point the football, but that’s a major projection.

At this point I wouldn’t feel comfortable drafting Allison until the last round of the draft, if at all.

The size is intriguing, but there are a ton of concerns with the senior receiver on the field.