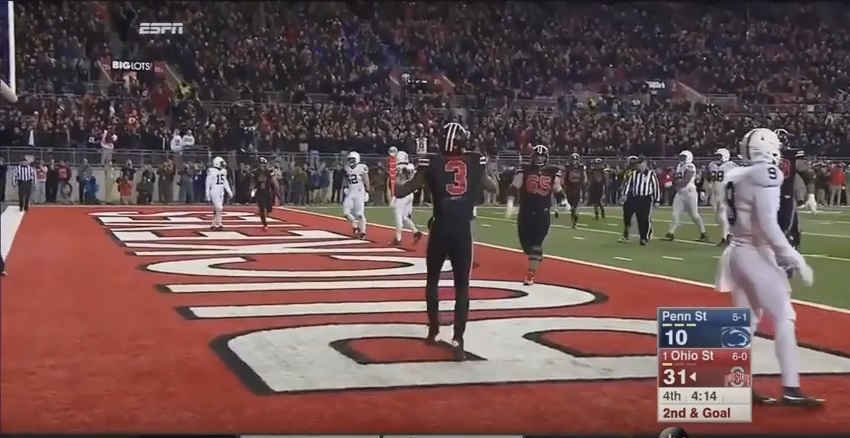 -Quick, efficient feet to get off line, avoiding press coverage
-Willing run blocker that latches onto defender
-Polished route runner that excels at creating separation at top of step
-Able to sink his hips quickly to get in and out of break
-Gets on top of CBs quickly by threating vertically with long, powerful strides
-Ideal size, arm length and hand size for position
-Homerun threat after the catch

-Two-year starter for the Buckeyes
-Led OSU in receiving during national championship run in 2014
-113 career catches for 1,602 yards and 18 touchdowns
-Nephew of former No. 1 overall choice, Keyshawn Johnson

As the nephew of former NFL star wide receiver, Keyshawn Johnson, Ohio State redshirt junior has the best bloodlines of any receiver in this class, bar none.

With that said, Thomas is nowhere near as dominate as Johnson was at Southern California, but thanks to that rich bloodline, Thomas has all over the tools necessary to develop into an above-average receiver in the NFL.

Standing 6-feet-3, and weighing in at 212 pounds, Thomas has a long, lean frame that has room to add some muscle to it. The think that jumps out at you quickly on film is the long limbs and the exceptionally fast feet that Thomas possesses.

Using his quick feet and long strides once he’s in the open field, Thomas is a significant home run threat despite not being a burner down the field.

Where he wins his one-on-one matchups is with his footwork and route-running ability. That’s what made him so special in a run-heavy scheme at Ohio State.

Possessing long arms and quick feet, Thomas was able to consistently get clean releases off the line against tight coverage.

Against Michigan State during the 2014 season in the previous GIF, Thomas uses quick, efficient feet to break to the outside before slamming on the breaks to slant back inside, creating tons of separation and a great throwing window for his quarterback.

After making the catch, Thomas shows you his ability to make plays after the catch, turning on the jets to outrun a fast, physical Spartans defense for the touchdown.

The following season, Thomas again shows great footwork against Virginia Tech’s Kendall Fuller, showing the ability to create great separation at the top of his stem, giving his quarterback a nice throwing window.

Later in the game, Thomas caps off the win over the Hokies with an exceptional double-move on Fuller, showcasing the exceptional feet on the stop-and-go.

What really stands out in this play though his the way Thomas is able to reach top speed quickly before slamming on the brakes, forcing Fuller to come to a complete stop as well. That transition back to top speed is tremendous and really has the ceiling of Thomas continuously rising.

This time on the opposite side of the field, Thomas utilizes the same route against Rutgers cornerback Isaiah Wharton. There’s the same quick burst off the line to threaten vertically; the same ability to slam on the brakes, forcing Wharton to bite on the play, which led to a pass interference penalty in the red zone.

It’s so impressive how Thomas is able to transition in and out of his cuts, stops and breaks so quickly at his size. His footwork is right up there with Baylor’s Corey Coleman for the best in this draft class.

Outside of his footwork as a receiver, Thomas is an exceptional runner after the catch, applying serious pressure to opposing secondaries.

He’s so smooth at starting and stopping, getting up to fully speed quickly to make defenders miss, while also showcasing power and determination, refusing to go down on first contact. That’s rare of a college receiver, especially one of the same build of Thomas.

One area I also really like for Thomas is his ability and willingness as a blocker.

He’s not an overly physical blocker each time, but he’s willing to put his body in harm’s way to open up lanes for his teammates.

Thomas isn’t going to drive guys into the ground, but with his reach and strength he is able to latch onto his defender while putting himself between the ball carrier and his defender.

Against Michigan State in 2014, Thomas was overly aggressive near the goal line as a blocker while being split out wide, which really showed me a fiery side of his game that I hadn’t seen before when watching film.

This is very rare at the goal line from receivers when the ball is run into the middle of the line. He’s a feisty receiver that has a mean streak to him; it’s up to his next coaching staff to get him to showcase it consistently.

While watching tape of Thomas, there were very few negatives to his game that stood out to me. That being said, I do have to nitpick slightly with Thomas’ tape.

Throughout a majority of the film I was able to get my hands on, Thomas relied solely on body catches despite having huge hands that swallow up footballs. While not overly concerning due to his limited issue with drops in college, the redshirt junior has to learn to use his big hands more often, especially in contested-catch situations, allowing him to make plays that he’s struggled with at the collegiate level.

On top of that, Thomas often becomes a spectator on the field when the play breaks down. There are times throughout his film where he’s just standing around watching one of his quarterbacks dance around in the pocket looking for receivers downfield.

He needs to learn to break off of his current route and either work deep looking for a home run on a busted play, or learn to work back to his quarterback, becoming a safety outlet on short or intermediate routes.

One last nitpick: I want to see Thomas develop the ability and feel for how to use his body to his advantage as a pass catcher, shielding the ball away from defenders, boxing out on jump balls and learning to high point the football.

If he works on that at the next level and combines that with some of his standout tools, Thomas could become a top 10-15 wide receiver in the NFL capable of carrying the load as a No. 1 target in a balanced offense.