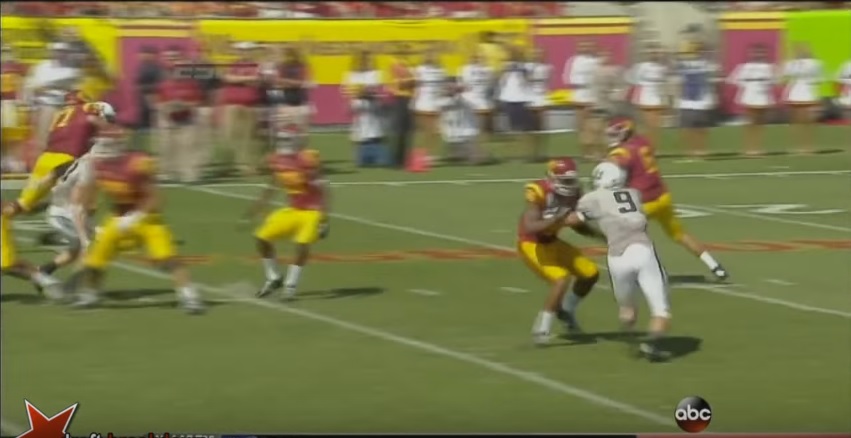 – Closing burst enough to force tackles to re-set
– Keeps his eyes in the backfield while being patient with coverage
– Uses vision on rush, adjusts to QB’s hitches
– Fast sideline to sideline, rangy LB
– Well-developed shoulders through dip
– High motor, constantly chasing from the backside
– Arms measured at 33 1/4″ at combine
– Violent closing burst on QB
– Became a lot more sudden with his movements from 2013 to 2015
– Consistently fast from the backside
– Vision/play recognition underdeveloped in 2013, improved in 2015
– Hips smooth and fluid downfield in coverage

– Slow to begin a move, needs to get upfield and start to pressure tackles
– Bad balance on spin moves, easily jarred off. Also slow to make the full spin
– Lacking in play strength – struggles to move 280 lb. freshman LT, much less larger tackles. 15 bench press reps at combine
– Stiff hips in open field
– Needs to churn his feet more through dip, gets sat on by tackles
– Can be undisciplined in contain

Fackrell is by far the last defender at the line of scrimmage to get off the ball, but his burst when he does react is dangerous enough to force the tackle to adjust his set and hands. Fackrell flashes some hip flexibility and bend to get around the edge, but doesn’t have the play strength to disengage in time. It does seem as though he impacted the pass, however.

In a power run inside like this, it’s expected that leaving the backside defender unblocked won’t have any negative effect on the play. The LT downblocks as the LG pulls, but Fackrell has the speed to come across the formation unblocked and make the tackle. This is really good technique from him.

Although it seems like he needs to stay home for the “BCR” (boot/cutback/reverse) in contain, #5 Maurice Alexander (current Los Angeles Ram) drops into the box pre-snap and is the one with contain responsibilities. It’s a clever bit of scheming that allows Fackrell to attack downhill after the run.

This is a less than optimal pass rush rep from Fackrell. He is slow off the snap, but this time it’s designed to contain the QB and be patient. I like the hand-fighting up the field and his vision stuck on the QB, Cody Kessler. When he sees Kessler step up in the pocket, he tries to correct his rush trajectory and adjust from the dip rush to the spin. However, his footwork is bad on the attempted spin move and his balance disappears. He gets absolutely pancaked as a result.

This is top-notch downhill LB play to sort through the trash, locate the ball carrier and make the play. From a guy who played EDGE for much of his college career, this is what you want to see in a transition to playing off the ball.

When scouts talk about “suddenness” in a pass rusher, this is what they’re referring to. Fackrell swims over the tackle in one step then closes and makes the sack. Aggression and athleticism in a phone booth.

It’s not often you see a prospect who could be just as adept at 3-4 OLB or 4-3 SAM, with the potential to develop as a heavy MIKE. But Kyler Fackrell is just that. He probably projects best as a 3-4 rush linebacker, but his zone coverage drops are not to be slept on. He could easily get by as an off-ball linebacker at the next level, and he carries his weight well.

He’s matured very well as a pass rusher from his sophomore to senior year (missing the junior year with the ACL tear), including playing with better base and strength. He still struggles with dropping his vision and balance on spin moves and doesn’t have a full arsenal of pass rush moves, but he can be devastating in a phone booth.

I think Fackrell would be best suited to get a maturing year at the NFL level, where he can work on his vision and pass rush moves. However, he undoubtedly has the size and athletic ability to play in the NFL. There will always be a home for a guy with a motor like his, as well. Fackrell will probably be a rotational pass rusher right off the start with a lot of potential growing room down the line.