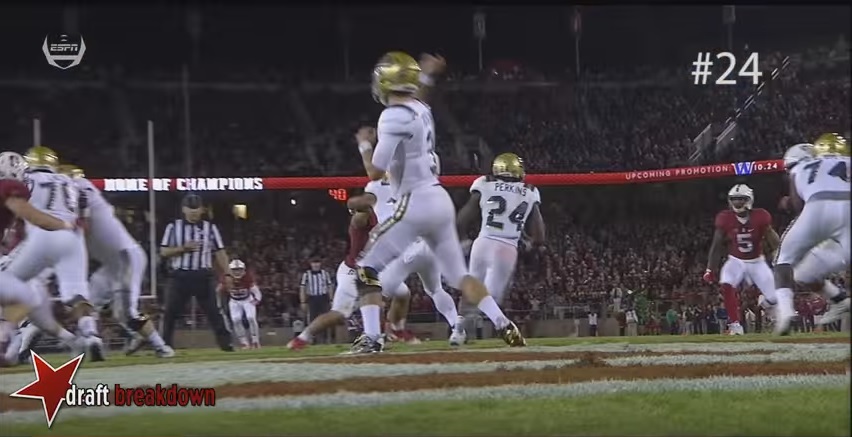 – Doesn’t commit fully to getting north/south even when the play has obviously broken down
– Lacks top-end speed, finishing burst downfield
– Ankles don’t quite have the adequate flexibility to turn the edge
– Fails to target center mass when pass blocking, no explosion into defender. Doesn’t set his base or anchor
– Lacks power when chipping before release
– Ducks his head and loses his vision when pass blocking

It’s the play Vined a million times the world over. If you have never watched the tape of Perkins, you’ve undoubtedly seen a .gif or video of this play floating around, and for good reason. Perkins puts everything out on display, so let’s take a look at it.

First, his bang read has unblocked LB Blake Martinez in his way immediately. Perkins puts on a sick shimmy move and makes Martinez miss in a phone booth. He tries to bounce outside, but the playside end has penetrated far enough that he has to bend it back inside. His vision is good and he sees the hole, with the agility to hurdle and the balance to stay on his feet. Another open-field forced missed tackle (make it two), and it’s off to the races.

Although this play gets called back, Perkins finds the crease, follows his blockers and hits the hole. He keeps his balance and drives through contact. This kind of running after contact will consistently produce yardage at the next level.

Although Perkins is elusive and slippery in the open field, that lack of power and base mean he gets rocked trying to pass block. Here, he’s assigned to chip the right tackle’s man but never sets his feet. As a result, he’s far off center and never generates any power, actually stunning himself on contact.

Perkins has tremendously impressive balance. On this fourth down when UCLA needs to move the chains, he keeps his feet (and hand) underneath him to squirt forward after dodging the tackle attempt. Once he recovers, he bursts into the open field for the score.

Perkins strings this run out patiently, before seeing a crease appear. Then, he gets going. Again, he forces a missed tackle in the open field. He uses his blockers so effectively as he waits for a read to develop with his vision. This is an ideal model of a back for a zone blocking scheme

This draft more than any other illustrates the importance of drafting running backs to suit a system. Ezekiel Elliott of Ohio State is deservedly the top RB in the draft, but it is up in the air after him. The general darling for that second spot is Alabama’s Derrick Henry, but for as dominant of a runner as he is, I’m not sold on his general scheme fits. Henry to me is a great power blocking back, but one I’m not sure fits as well in a zone scheme. Kenneth Dixon from Louisiana Tech is also in the mix to be that second back drafted, offering more versatility than Henry, but less ability in some areas.

If you were drafting for a zone blocking team and wanted to go running back in the second, it would be hard to say Paul Perkins isn’t going to be near the top of your board. Although he’s not quite the overall caliber of player as Henry, his fit in a zone scheme is so much smoother. For that reason, Perkins could easily leapfrog to the second-highest graded RB on the board for a lot of zone teams. His good footwork and top-notch vision make him an excellent fit for a team that likes to give their back reads in space, and while he doesn’t have that breakaway speed, he has just enough to threaten defenses.

A lot of people understandably raise questions about his size, and that may well limit him in the NFL. My biggest concern is his base and lack of power pass-blocking. With his receiving ability, you’d like to leave him on the field for third downs, but that complete lack of skillset will curtail his usage.

Perkins flashed a tendency at times to try to dance a little too much when he needs to just get north and south to move the ball. Although that was comparatively minor in college, when he gets to the NFL, that will become more important. However, his balance is good enough to run through some crowded spaces and his ability to make defenders miss in a phone booth will absolutely translate.

All in all, Perkins’ skills that make him a viable fit in an NFL zone blocking scheme also make him extremely NFL-ready. He’ll be able to come in and play in a committee from Day 1, with the upside to develop as a pass blocker and third down weapon. Although he’ll never hold up as a workhorse back, he will easily be the kind of guy who comes into a team and solidifies a role from the get-go.