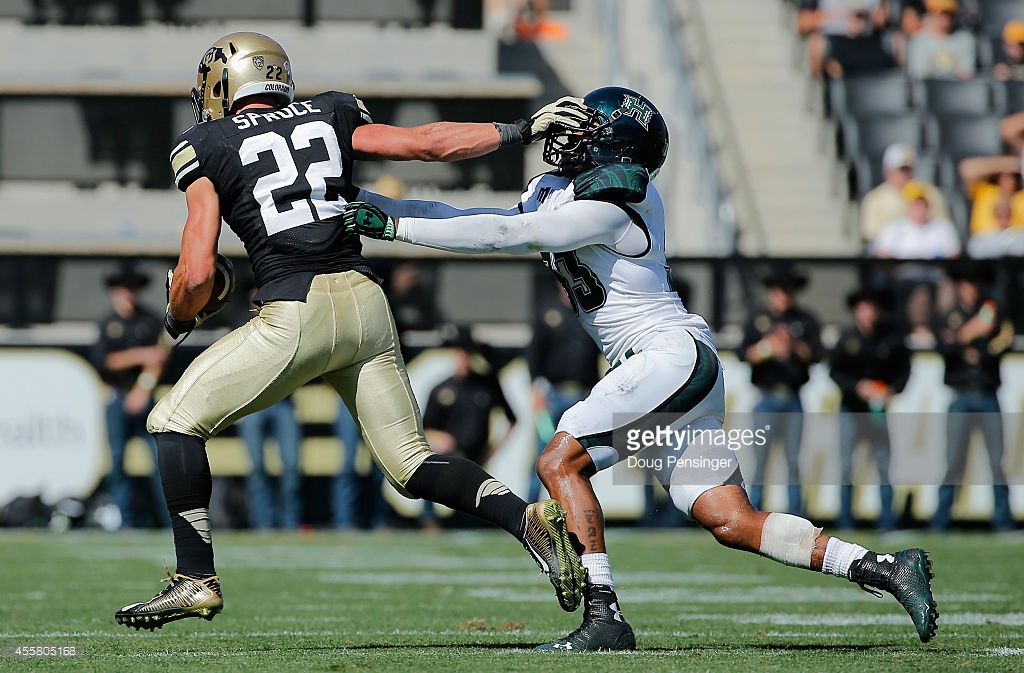 -Quick feet at the top of stem, able to change directions quickly
-Shifty open field runner
-Great spatial awareness for a receiver
-Quick, effective bursts out of his cuts, rarely wastes movement
-Uses good head fakes and body movement to shake corners on routes featuring double-moves
-Uses body well to box out defenders on balls that will be contested
-Tremendous body strength and hand strength, which allows him to make tough catches consistently
-Chain-mover that always comes up with big catches
-Varies speed well in routes

-Takes some time to get up to top speed in routes
-Not a serious deep threat, allowing corners to squat on routes
-Inconsistent blocker, which seems to be more of an effort issue than technique
-Runs a high number of the same short-to-intermediate routes in games
-Body catches quite a few passes despite having great hands
-Lacks getaway speed, meaning defender will always be on his hip
-Limited catch radius due to small frame

Due to outstanding production during his four years at Colorado, Nelson Spruce holds the throne as one of the best receivers to ever play in the Pac-12.

Seriously, it’s true. As a member of the Buffaloes’ struggling football program, Spruce racked up reception after reception, setting the All-Time Pac-12 receiving mark this past season.

In his career with the Buffs, Spruce hauled in 294 passes for 3,347 yards, including a career-high 106 receptions in 2014; a year in which he finished as a finalist for the Fred Biletnikoff Award.

At 6-foot-1, 206, Spruce isn’t a physically imposing receiver, nor is he a game-breaking receiver. However, Spruce is all about consistency, whether it’s moving the chains repeatedly during a game, or if it’s making the big, contested catches to keep drives alive, Spruce is always there for his quarterback.

It’s safe to say that the redshirt senior was a major security blanket for the Buffs during his time in Boulder.

As the security blanket, Spruce made a living working in the middle of the field and along the sidelines for Colorado.

Despite being an experienced receiver that mostly created a sliver of separation thanks to his crafty route-running, Spruce continuously had to make catches throughout his Colorado career while playing through contact.

That’s what makes Spruce an intriguing receiver in the NFL. He’s not afraid to go into the middle of the field to take a shot, but he won’t run by anyone. He constantly moves the chains, but he runs very similar routes each time, allowing corners to start squatting on those routes late in games. Plus, he does a great job of using his body to box out defenders on contested catches, but his limited frame and athleticism holds him back from winning a lot of jump balls in the air.

So, if you’re going to invest in Spruce, you need to have a plan on how to utilize his pros while staying far away from his cons. With that being said, I feel that Spruce is an ideal slot guy in the NFL who can work on his craft in the middle of the field, providing his quarterback with a consistent check-down option.

What I love about Spruce is his ability to move the chains on a regular basis. Whether he’s running a route that puts him right at the sticks, or if he catches a pass short, nine times out of ten he’s going to put the chains in motion.

That’s his gift: he has great spatial awareness, knowing where he is at all times on the field.

On this play against California in 2014, the Buffaloes need a first down to keep the drive alive.

At the snap, Spruce breaks to the outside, but he can’t create a ton of separation against the corner. However, he gears down quickly, whips his head around to find the ball and makes the great catch along the sideline to move the chains.

This type of route is one that Spruce did most of his damage one throughout his career. At Colorado, Spruce averaged just over 11 yards-per-catch, which should tell you what area of the field is his strongest suite.

Along with his great spatial awareness as a receiver, Spruce has impressive play strength despite the thin frame.

Take a look at this place against UCLA this past season.

It’s a simple curl route, but Spruce has to work through the defender that is sitting on his route.

By making contact and creating separation, Spruce is able to give himself just enough room to get his head around to find the football, box out the defender and tuck the ball away once he makes he makes the catch through contact, once again moving the chains for the Buffs.

Another area of Spruce’s game that I really like is the way he uses his hands to beat press coverage and work through contact.

He made a habit of it this past season.

Plays like these two right here is where Spruce is going to make a living in the NFL.

Both are simple routes that are designed to pick up some yardage, giving the offense a better shot at moving the chains.

In the first clip, Spruce does a nice job of swatting away the sitting corner’s jam, allowing him to break inside for the catch that moves the chains. By shooting his hands out to swat aside the corner’s jam, Spruce also gives himself plenty of separation at the top of his stem, making it easier for him to run after the catch.

In the second clip, Spruce uses the inside swim on the corner’s jam to break into the middle of the field on the slant route. Just by using his hands at the line to get free inside, Spruce is able to sprint into the end zone for one of the easier touchdowns he’ll ever score in his career.

Despite not having game-breaking speed or one obvious trait that stands out above the rest, Spruce does all of the little things well, which should bode well for him at the next level, allowing him to see the field.

One area that I think needs improvement though is his run blocking.

It’s not that Spruce lacks the technique needed to be a good blocker, it’s more about effort, which is concerning for me, considering he isn’t a guy that I would normally question with effort.

As a receiver, Spruce’s effort is always there. However, when it comes to run blocker it appears that Spruce sometimes just doesn’t care for the contact, which leads to weak attempts at blocking.

Take a look at this clip here against California from 2014.

By just leaning into his defender, Spruce easily allows the corner to slip off his block to make the play. That’s very, very poor for a senior leader like Spruce.

It happens quite often in the film that I’ve watched, but again: if you’re going to draft Spruce, have a plan.

From the receiving side of things, Spruce should be able to carve out a solid role as a No. 2 or No. 3 target in the NFL. He’s a consistent force that goes about his business quietly, but always shows up when it’s time to play.

On top of that, Spruce is a fearless punt returner who makes the right play more often than not as a returner. Although he lacks breakaway speed, he’s a guy who will pick up chunks of yardage, putting the offense in the best position possible following a punt.

Plus, he isn’t a concern from a fumbling standpoint. Catches punt cleanly isn’t an issue with this guy.