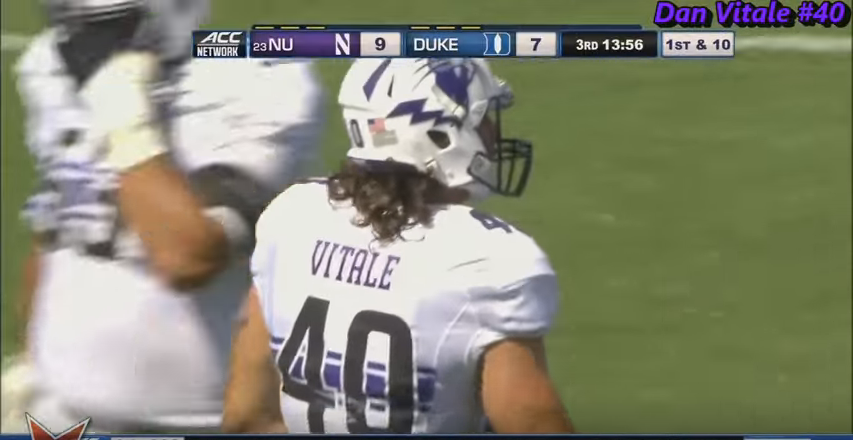 – Comes across formation on wham blocks effectively
– Can actually get off the line of scrimmage as a receiver
– Quick in phone booth
– Runs aggressively
– Great burst
– Sure hands catching the ball
– Low pad level, explodes into defenders
– Blocks through the whistle
– Adjusts to throw of ball

Shotgun pass pro rep for Vitale, who has an isolated matchup one on one on a LB in space. He mirrors and resets well against the rusher. He drops anchor, and gets some active handfighting in. Great win on a blitz pickup for a FB-type who’s supposed to be stiff and overworked in open space, not as lithe as this.

For a WR, this is a solid route. For a TE, this is a very impressive route. For a FB? Fuhgeddaboutit. For a Dan Vitale, this is commonplace. You shouldn’t see H-back types running 10-yard corner routes from the slot as smoothly as this.

Vitale is asked to wham block the backside DE, who takes on this play too high. Vitale squares and settles, getting his pad level lower to fire into the end more effectively. On a wham block like this, this is the ideal outcome.

Tidy little play design here that sees Vitale take the pitch underneath from his wing left position with a pulling LG. Vitale then runs over, through or around four tackle attempts (by my count). This kind of running in the open field is rare from FBs or TEs generally, but it’s just another skill that Vitale brings to the table.

Although the contain corner takes a dreadful angle in the backfield, Vitale makes this happen. He blows up #33 in the hole. Note his low pad angles and hand placement. This is how you fire into a block in the gap, and he plays it to perfection.

This is savvy receiving by Vitale. In a hurry-up two-minute offense, he knows he has to keep the chains moving. Against the soft zone, he finds the soft spot and sits like he was taught, showing the QB his hands and numbers. The catch is high, but he adjusts, leaps and pulls it down. Again, folks, the NFL shouldn’t call this guy a FB.

As some anonymous wizened Chinese philosopher probably once said, “In trying to do everything, we accomplish nothing.” While that sage advice has no shortage of applications in personal life, it’s clear that a saying like that has no import on a player like Dan Vitale. Do I know what he is in the NFL? I think he’s everything, which does not mean he’s nothing.

Vitale will be able to play a lot of different roles in different offenses with a consistent level of success. If you’re a fan of a guy who likes to block, Vitale is the man for you. If you’re fan of an athletic guy who has a surprisingly expansive route tree, Vitale is the man for you. If you’re a power running team, Vitale will have a place. If you prefer to air it out with an H-back or in-line TE, Vitale also fits. His versatility is ridiculous – one of the most versatile players I’ve ever scouted.

As a blocker, he is powerful and explosive, with the ability to line up in different places (FB, RB, H-back, wing, in-line TE, slot) and still lock out a defender. However, he is still raw, causing minor errors that he can overcome against college opponents but will become an issue in the NFL. For instance, he doesn’t block to target so well. What I mean by that is, not using the leverage and angles of the field to his advantage to block a defender out of the play. His power overwhelms them in college, but in the NFL, a savvy LB is going to redirect that block and come in to make a play. It’s just something Vitale needs to be coached up on.

Vitale is a four-core special teamer as well, and that is a place where he’ll make an impact as a rookie. He should excel in the physicality of punt and kickoff return/coverage units while he develops a presence on the offensive side of the ball. Vitale isn’t just a combine workout warrior, he backs it up with his play on the field. Although he plays some positions that have been devalued in the NFL, he is so standout in them and has such added importance on special teams that I think an early Day 3 selection is not only possible but quite likely.

His fit as a FB with the Steelers is less pronounced, considering the presence of Roosevelt Nix. However, he could easily compete if taken with a later Day 3 selection as a move TE.