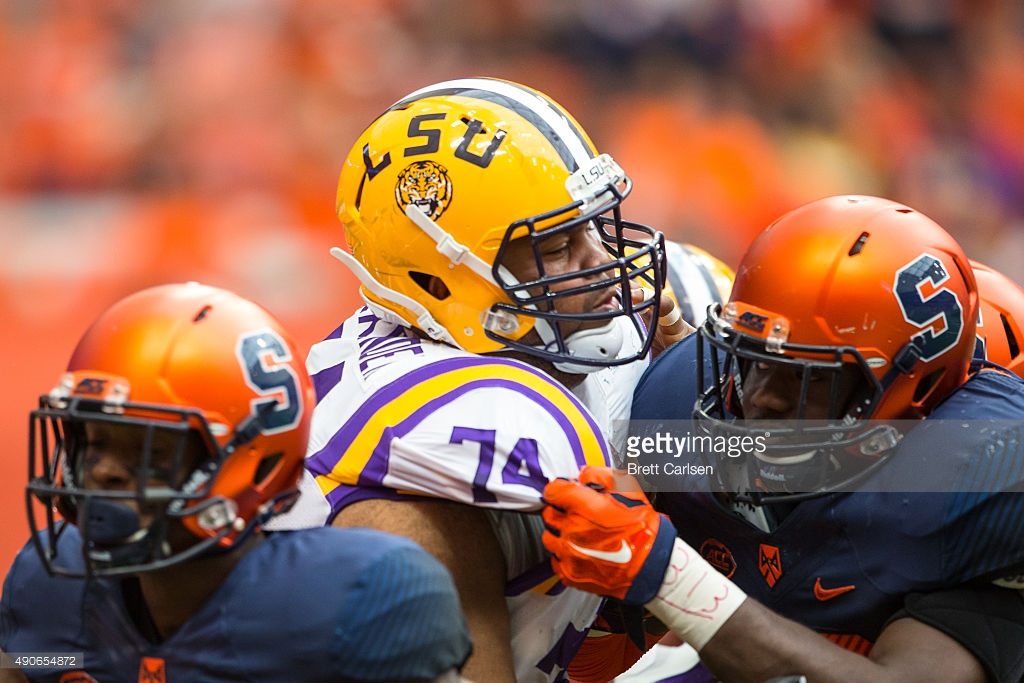 – Slow to react off the snap
– Bad balance, bad on his feet
– Laterally slow
– Lacks power and anchor proportionate to his size
– Fails to block to the whistle
– Needs to find someone to block, head on a swivel
– Susceptible to being redirected inside
– Drops vision and doesn’t watch his way to target
– Doesn’t sustain blocks

I have watched a lot of football tape and scouted a lot of players, and I’m honestly not sure that I’ve seen anybody move as poorly as Vadal Alexander. He’s understandably a big man, but even that that shouldn’t excuse some of his errors just in getting himself around on the field.

I can’t tell if this is a completely lazy cut block attempt or just an absolute flop by Alexander. I think it’s a cut block, but that raises even more questions. Where was Alexander’s use of his hands to swat off Chris Jones? Where was the extension and surge to the cut instead of slowly falling to the ground? Where is Alexander even looking when he should be aiming his body into the defender?

Again slow out of his stance, Alexander completely whiffs on a downhill LB in the hole. Ultimately, that linebacker is one of the Bulldog defenders who stands Leonard Fournette up at the line for the third down stop. Alexander needs to have a head on a swivel to see the defenders, and considering his assignment at LB is the first one to make contact with the back, this is a serious mistake in a phone booth for Alexander.

It’s not that Alexander has bad technique either. Here, he fires his hands inside and engages hard to the body of the defender, exactly what you’d want him to do (although his left hand creeps a little outside on the engage). However, he gives almost no effort and allows the defender to disengage far too easily when the play isn’t even close to complete.

At times, Alexander can’t set his feet and use his base, but when he does, it’s beautiful. He uses his 35 1/4″ arms and drops his anchor to hold Jarran Reed at bay. He’s even able to shuffle laterally and keep the block extended to the sideline. This is one of the few snaps I saw where Alexander truly put it all together and use his length and size to his advantage.

At times, Alexander is an absolute head-scratcher when blocking.

He has FOUR defenders within wingspan at one point or another during this play and doesn’t block any one of them. The run is away from him and goes for a long TD, but at a certain point you have to start looking at the player. That is simply unacceptable. He at least redeems himself somewhat by running downfield trailing the play.

Alexander is a slow player on the field, mentally and physically. Whether it’s squaring up to find a linebacker in the hole, scanning a defense to pick up a blitzer, or something as simple as exploding off the snap, Alexander can’t do it. His 5.57 40 yard dash doesn’t really mean anything to an offensive lineman, but it does give reason for pause simply in that it flunks any kind of benchmark test.

It’s tricky to look at him and say that his body fits NFL molds. Tre’ Jackson and Josue Matias were highly touted guard prospects out of Florida State last year who had comparable size and movement skills (although not quite the length). Jackson went in the 4th and Matias was undrafted, so I’m not sure really what much more Alexander offers than them.

His anchor is inconsistent, his hand usage practically nonexistent. He uses angles well against defenders, but that doesn’t help when he doesn’t have the speed to match rushers. I also have serious questions about his effort blocking. After all, it’s not a good look when your running back gives greater effort on a designed roll-out to your side on third-and-long than you do.

Alexander is also limited to the right guard spot in a power scheme. He doesn’t have the footwork or athleticism to play left guard or either tackle spot, and he certainly doesn’t fit in a zone-blocking scheme. His best hope is to get a coach who can really get into his head and tease some of his potential out, because right now he’s just getting by on frame alone. I really can’t see any of the first-round talk that’s been bandied about.