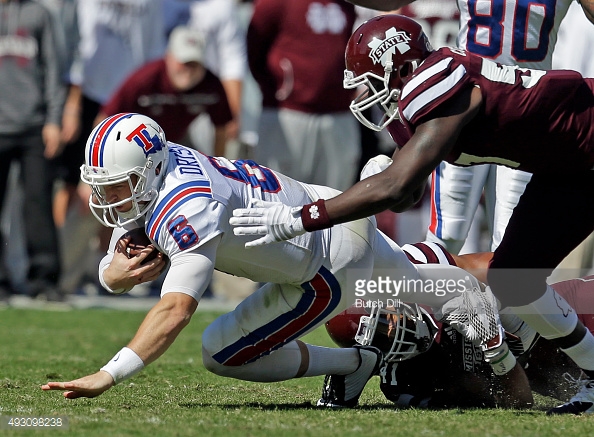 – Comfortable running designed QB Dives and option
– Rips throws in through zone coverage
– Leads WRs to open space, gives them room to run
– Good vision of downfield sidelines
– Prepared to take a hit to deliver a ball
– Has the arm to make most throws and surprising touch
– Hard to do complete evaluation considering he was limited by offense

– Fails to recognize lurking LBs in zone
– Mentally slow, needs to be faster decision-maker – sometimes refuses to come off first read
– To use a Mike Mayock expression, “burps the baby” – pats the ball with off-hand before committing to a throw
– Footwork lazy, just stands in the pocket at times. Splays his feet too wide, poor base throwing
– Has a tendency to slowly work himself backwards from the LOS
– Playfakes with empty hand, not the ball
– Doesn’t scan the field, bad eye discipline
– Bad awareness of blitzers
– Uncomfortable in the pocket
– Has seemingly 2-3 throws per game that are clear miscommunications and airballs to nowhere
– Can lay WRs out for safety

At Florida, Driskel was never really asked to throw the ball downfield. He ran the ball effectively in the short-yardage game and distributed it to the perimeter, but he wasn’t asked to stand in the pocket and pick apart a defense. He threw screens, he threw wheel routes, and he flashed good touch, but the offense simply didn’t ask him to do much more than that.

There was no anticipation needed, and very few throws across the middle. He had a penchant for underthrowing go routes, leading to some ugly interceptions too. Many had low expectations when he arrived at Louisiana Tech, but he looked very distinct from the Gator he had been.

Even in a system designed to get the ball out of his hands quickly, Driskel still froze at times. On this 2nd and 1, the quick screen is there, and he needs to get the ball out. However, he double-clutches and holds on too long. Staring the receiver down and rolling to the sideline also entices the LB out of the box, and Driskel eventually has to just run it himself. This is a case of where overthinking the play can kill it.

3rd and 28 is a draw down. Or a tunnel screen down. It is usually not a roll the pocket and have the QB take a shot downfield, particularly after back-to-back sacks by Jordan Willis. Even though this ball is completed about eight yards short of the first down, I love the fire Driskel shows. He takes the opportunity to really sling the ball and take a shot, and a 29-yards in the air throw like that is extremely impressive. That throw got them back into field goal range and got them points on the board.

Although this is a crisp drop and good throw from Driskel, it illuminates one of his biggest issues – eye discipline. You can see him staring down the receiver (Trent Taylor, who’ll be a big name next year) from the beginning of his drop. The throw also forces the WR to turn in his route. Good footwork and a good decision cover for what was otherwise a receiver stared down and a poorly-placed throw.

Driskel’s arm talent does occasionally make up for other errors in his play. Here, he stares the receiver down the whole way, leading the backside safety to actually come across the formation based on his eyes. He rips the ball in just ahead of him for the score. In the NFL, DBs are bigger, faster and more instinctive. This safety was slow getting across the back end and could easily have intercepted this ball or laid out the receiver. In the NFL, that’s going to be a massive no-no.

This is one of only a couple of snaps where Driskel was perfect with his eyes. In fact, this is a top-notch NFL throw and I really can’t say anything about how else it could have been done. Look the safety left, throw back-shoulder to the sticks in the end zone right. There’s no way to defend a throw like that.

It’s simply difficult to find more than a handful of NFL-projectable throws from Driskel. The offenses that he operated in for the Gators and the Bulldogs just don’t have many throws that translate with any sort of consistency to the next level, so an evaluation of him as a prospect is somewhat limited by extension.

Do you push him down your board for the inconsistencies he put on clear display? Or do you draft him higher for the sheer flashes of excellent play he showed? That depends on your strategy as an evaluator. For me, I acknowledge that his offenses held him back as a player and a prospect, but what he did show on the field with more consistency worries me in a quarterback. Bad eye discipline, lazy footwork and uncomfortable pocket presence are all negative factors in operating an offense that give me cause for concern.

Driskel is going to need some tutelage just to get him up to NFL game speed and mental level, but who has some ceiling beyond that. His 4.56 40 yard dash shocked at the combine, but his 4.25 short shuttle was also a top-4 position group time. He’s quietly athletic, with touch and arm to spare. It’s just a matter of getting him to make more NFL throws in practice than he would across some weeks in college.

Games Watched: LSU at Florida (2014), at Rice, at Kansas State, at Mississippi State