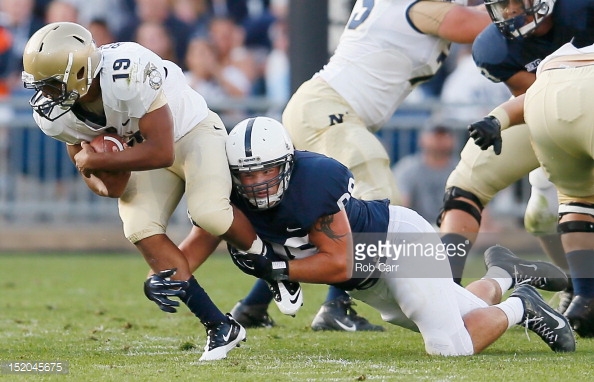 -High motor player that fights through blocks consistently
-Quick get-off at the snap, allowing him to beat linemen cleanly
-Good awareness and ability to react quickly
-Reads QBs eyes to get hands up in passing lanes
-Lives in opposing backfields
-Good lateral footwork on interior
-Above-average spin move as a pass rusher
-Quick, powerful hands at the snap

-Struggles with balance when rushing passer, falls to the ground a lot
-Struggles against double teams and down blocks, can be washed out of rushing lanes
-Short arms for the position (31 1/2 inches)
-Has a hard time dropping hips to anchor against the run
-Doesn’t consistently finish against ball carrier

-Recorded 38 tackles for loss and 20 career sacks at Penn State
-Earned First-Team All Big-Ten honors in 2014
-Reigned in four career interceptions with the Nittany Lions
-Famous for Instagram video where he tackled a tree out of the ground.

Part of a loaded Penn State defensive line that made a habit of disrupting plays in the opposing backfield, Anthony Zettel might be the odd man out when it comes to hype surrounding the upcoming NFL Draft for his fellow Nittany Lion teammates, Austin Johnson and Carl Nassib.

Zettel might not have the big name recognition, but he’s a guy who immediately jumps out at you when you throw on the tape.

Despite being slightly undersized for an interior defensive lineman, Zettel uses speed and athleticism to his advantage more often than not to beat the man across from him on his way to 20 career sacks and 38 tackles for loss in his two years as a starter in Happy Valley.

Standing 6’4” and weighing 277 pounds, Zettel has the appearance of a 4-3 defensive end, but with Carl Nassib next to him, Zettel was forced inside where he reeked havoc in 2014, but “struggled” as teams adjusted to him in 2015.

I use quotations around the word struggled above because Zettel still turned in 11 tackles for loss, four sacks, one forced fumble and even picked off three passes in 2015.

Although he’s going to be labeled as a guy without a true position, Zettel projects as a 4-3 defensive end who can work on the edge against the run before sliding inside to utilize his speed and motor against interior offensive linemen in obvious passing situations.

As a pass rusher, Zettel has a tremendous spin move that simply baffles guards who aren’t ready for it.

Against Rutgers Zettel simply went off as a pass rusher, utilizing the spin move early and often to really throw off the interior of the Scarlet Knights’ line.

Combining his quick get-off and his high level of athleticism is a deadly combination for an interior pass rusher, which he put on display quite a bit.

He’s so fast off the ball that he doesn’t even need to set up the spin; he just deploys it so quickly that the offensive linemen barely get a hand on him each time.

When not blowing by offensive linemen with his spin move, Zettel has a great club to stun linemen before zipping by into the backfield.

As you can see in the clips above, Zettel is exceptionally fast off the ball in each instance that the offensive lineman is playing catch-up early.

His fast, violent hands allows him to get into good position to get by the offensive linemen, but where he falls short in these instances is when he falls to the ground due to a lack of balance.

Due to the fact that he plays so fast with his hair on fire, Zettel’s feet often fall behind, which puts him in the dirt a lot. However, he deserves a ton of credit for his impressive motor.

In each clip, Zettel is back up on his feet quickly to make the play in the backfield.

His motor is arguably his best feature. You simply can’t teach players to give maximum effort on every snap like Zettel does. It’s extremely rare, so when you see it it’s easily recognizable.

Coaches at the next level will love to get their hands on Zettel not only to refine his tools, but allow him to use his motor to the best of his capabilities to help set an example on how to leave it all on the field snap after snap.

Outside of pass rushing, Zettel does struggle against the run due to his light frame for the position and lack of arm length, allowing opposing offensive linemen to get into his pads.

In this clip, you can see how he struggles to drop the anchor against the run, getting flushed out of the running lane on the double team.

Although it is concerning, adding another 20 pounds or so to his frame would do wonders for him. As a potential base 4-3 defensive end, Zettel will have to hold up against offensive tackles, so he’ll need to develop more leg strength. Based off his work ethic and commitment to training, I see no reason why he can’t do just that while maintaining his speed off the ball.

Just look at that get-off. While interior offensive linemen in the NFL will be head-and-shoulders better than the Central Florida guys that Zettel went up against, speed is often a serious counter to brute strength.

You see that here in this clip at the start of the game. Zettel is in the backfield almost at the same time the UCF running back receives the handoff. That’s almost Aaron Donald-like, and No(!), I’m not comparing Zettel to Donald so don’t even try dropping that nugget in the comments.

Overall, I really like Zettel’s athleticism, speed and ridiculous motor as a 4-3 defensive end in this draft class. He might not be a high-level player in the NFL, but at the very least he’s a situational pass rusher that can serve as a high-end reserve at the next level.