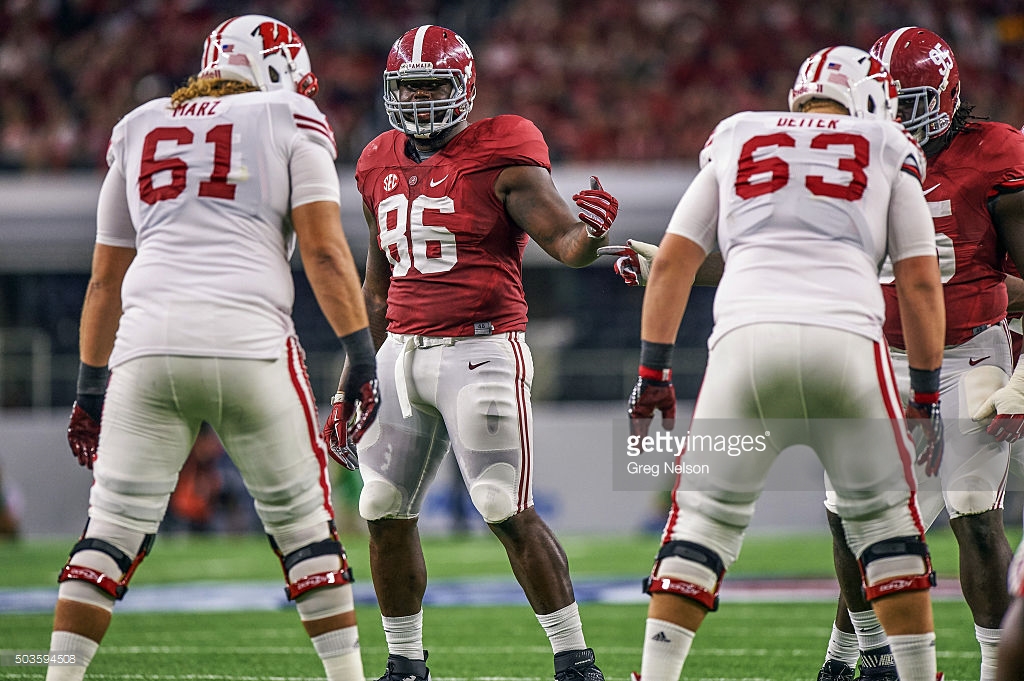 – Three-point stance looks disjointed with back feet too far up, limits his explosion
– When bursting off the line of scrimmage, feet placement is too far extended behind him, can’t generate force in first two steps
– Can get sucked too far downhill with outside responsibilities, likes to slice outside of play design
– Balance questionable off toolbox moves
– Effort questions? Doesn’t always go all-out
– Needs better vision of backfield
– Often unable to disengage from blocks against the run

Although scouts often place a value on how fast a pass rusher causes disruption from their moves, it’s arguably more important to see what they do when not using a move. Do they just run and lazily arc into the offensive lineman? Attempt a half-hearted pass rush counter?

Robinson’s bullrush is his go-to move, and it can be devastating. When he engages up under the pads of a lineman, he is able to put them on skates. His initial punch is strong, and what he does is “hurry” the player. He doesn’t give him any chance to anchor, or react, and because of that he gets pressure.

One of Robinson’s better traits is his rush awareness. He’s late engaging with this LG and never really gets the chance to get into a move. Instead, he gets his hands up and disrupts the throwing lanes for the QB. Great situational knowledge and ability from Robinson, despite not being able to cause an incompletion.

There is a subtle, yet distinct difference between play vision and backfield vision. This illustrates the difference nicely. Lined up as a 3t, Robinson has a downblocking LT Jerald Hawkins in his face, which he clearly recognizes means a pulling lineman. In this case, the Tigers pull both the LG and C to the left.

Robinson has the play recognition to engage to the defensive right as he should attack a pull. However, this is a beautiful design that sees the QB read the unblocked MLB and give it to Leonard Fournette into the backside B gap. Robinson may read the flow of the play correctly, but if he doesn’t keep his eyes in the backfield, that may be for naught.

Robinson may be a highly athletic big man, but there are limits to that. He may be able to hurdle an offensive tackle as if he’s nothing, but he can’t turn on a dime. That’s where scheming plays the second half of the equation. He needs to keep contain here, particularly on a 3rd and 4, particularly against an extremely mobile quarterback like Deshaun Watson.

As soon as he flips his hips and comes down the line, he gives up the outside due to his lack of ability to turn and run. He needs to play smarter within the design of the play and not try to do his own thing here, particularly on a down as important as this.

For a three-year starter at Lineman U, Alabama, Robinson has some incredibly messy parts of his technique. I’m surprised I haven’t seen more people reference this part of Robinson’s technique, because I saw it as a consistent issue. It was just all wrapped together as a neat, tidy package on this play.

When Robinson is down in his stance, he’s far too tight. Compare how both of his feet are directly under his hips to the other linemen. D.J. Pettway (#57) is probably the easiest to see at RDE. Note how Pettway has one foot under him and one cocked back with his knee bent, while Robinson’s feet are roughly on the same level of the field. In their respective three-point stances, Pettway is able to get low and explode off his hand while Robinson’s center of gravity is further back and he’ll have less burst.

Getting off the snap, Robinson has to compensate by lunging forward a lot farther to get any initial jar. He doesn’t bring his feet with him, and makes contact with a bad base. As such, he gets rocked by the LT and completely knocked over. I do realize that some coaches intentionally train some players to have such a tight stance if they’re already powerful off the line, but they also have to teach them not to lunge like this after the snap.

Please, don’t make the mistake that Robinson and fellow Tide interior defensive lineman Jarran Reed are the same or similar as prospects. I’ve already seen too many people this draft season continue to perpetuate that myth. While I’m not going to say they’re polar opposites, they do have some distinct differences.

If you read my profile on Reed, you’ll remember how high I am on his abilities as a run defender. Robinson doesn’t show the same enthusiasm for fighting the run like Reed does. While I’m not going so far as to suggest he’s ducking the reps, it’s simply clear that he’s not nearly as motivated to stop the run. I see Reed as being a run-stuffing 4-3 3t DT, while Robinson projects as a pass-rusher/slicing 3-4 5t.

Where Robinson is clearly separate from Reed is his abilities rushing the passer. He’s able to keep his feet churning and walk his man backwards. His initial punch doesn’t quite have the power you’d like to see, but it’s the continued harrying of offensive linemen that will win his snaps. He also has the sixth sense (what I like to call a pass rusher’s internal clock) that lets him know to get his hands up when he senses the quarterback preparing to deliver the ball.

Robinson’s moves are more polished than Reed, but it is in his athletic ability where he compares favorably to other members of the draft class. He plays athletically on the field, with several ridiculous hurdles and jumps. Although Reed has the higher floor come Week 1, it is Robinson who could truly boom as a prospect if a coaching staff develops what’s there and eliminates some of the laziness.