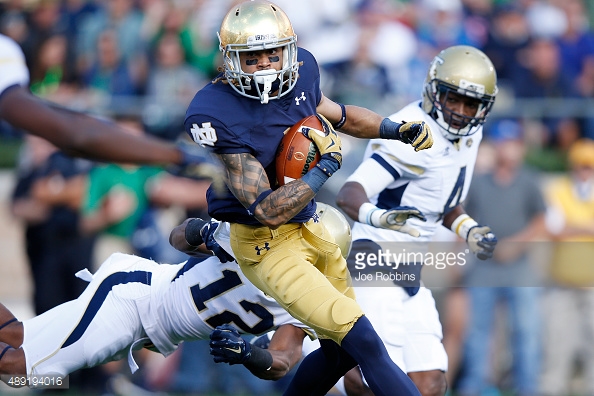 -Supremely athletic receiving option that is a threat to score on every touch
-Exceptionally quick in and out of cuts
-Tremendous runner after the catch, great vision
-Breaks off route well to extend plays when QB has to scramble
-Tracks football well in the air
-Strong ability to plant and go in and out of breaks
-Willing blocker who brings a bit of scrappiness to the table

If you’re looking for a significant homerun threat that routinely blows the top off of defenses, Notre Dame’s Will Fuller is your guy.

The junior receiver is arguably the fastest receiver in the 2016 draft class and it shows on tape consistently.

But if you’re looking for a more well rounded receiver, Fuller likely isn’t anywhere on your radar at this point.

While he’s not a one-trick pony by any means, Fuller really struggles with drops and doesn’t appear comfortable working in the middle of the field on a consistent basis.

A lot of that is due to his slight frame, which is a bit concerning moving on to the NFL level.

Weighing just 186 pounds, Fuller’s game is based largely on him running away from people, but for him to truly fulfill his star potential he’s going to need to show the ability to work in the middle of the field on crossing routes, digs and slants.

It’s not as if the ability to do it isn’t in Fuller; he’s exceptionally fast off the line and gets in and out of his cuts rather quickly, leaving defenders in the trail technique.

Having a game based largely on speed isn’t a bad thing whatsoever, especially in todays game. That area of his game helped him score an absurd 29 touchdowns over the last two years with the likes of Everett Golson, Malik Zaire and DeShon Kizer throwing him passes.

Watch how Fuller simply runs away from his defender in the two clips above.

Does that remind you of anyone?

I see a ton of Mike Wallace in Fuller’s game, and that’s not necessarily a bad thing.

With speed for days, Fuller immediately opens up the field for the rest of the offense in the underneath part of the defense because of his blazing speed down the field.

In the first clip, Fuller sets the tone for the rest of the game against USC by blowing by Adoree Jackson — who’s going to be in consideration for best defensive back in the 2017 Draft Class — with ease on the post route.

See the quick plant with his left foot at the top of his stem, kicking off his acceleration to pull away for the score?

A similar thing happens in the second clip against UMass.

Fuller runs a straight 9 route and blows right by the cornerback. Although the throw was slightly overthrown, Fuller makes one heck of a play on the ball.

Unfortunately for Fuller, the ball came out at the end of the play, resulting in an incompletion, but the straight-line speed and the effort at the end to try and haul in the pass really spiked my interest in him.

When Fuller isn’t blowing by guys on the outside, he’s running great routes and utilizing his above-average awareness to make great catches along the sideline.

Picking on Jackson once again, Fuller sells the quick slant inside before turning up field quickly on the double move to create ample separation down the field, allowing Kizer to drop one in to Fuller, who makes an exceptional catch along the sideline.

Along with his good route running and blow-by speed, Fuller picks up yards for his offense in an obscure way: drawing huge pass interference penalties down the field.

In that way, he reminds me a lot of Torrey Smith, who parlayed his ability to draw big penalties down the field as a vertical threat into a nice-sized contract with the San Francisco 49ers in free agency two off-seasons ago.

When not flying down the field, Fuller is a serious threat to take a short swing pass and turn it into highlight-reel worthy plays.

In the clip above, Fuller takes a simple quick-screen from Golson against Florida State and turns on the burners, hitting the seam with impressive speed to apply pressure down the field to an athletic Florida State defense.

Adding this to his game made Fuller one of the most — if not THE most — dynamic receiver in the country over the last two years.

While the highlight-reel plays look terrific on film, Fuller really turned in some clunkers for games as well.

If Fuller had it his way, I’m sure he’d never lay eyes on the Boston College film from this past year. In that game played at Fenway Park, Fuller really struggled with drops and raised a lot of questions about his game.

For starters, he attempts to body catch far too often. A lot of that might be due to him having rather small hands (8 1Ž4 inch hands) for the position, and a lot of that might have to do with his technique, but whatever is behind it has to get corrected quickly at the next level.

Although you’ll take the good and bad with a dynamic threat like Fuller, you need to have a consistent receiver on the field who won’t drop the ball in big spots, and right now I’m not sure Fuller can be counted on consistently to start his career at the next level.

There’s no denying how he can change a game on one or two big catches down the field, but you could say the same thing for one or two big drops in big spots.

I don’t want to say he’s a hit-or-miss receiver right now because I believe he has the ability to develop into a well-rounded receiver, but he has to put in the work and on the field and in the weight room to add some bulk to that frame of his.

Should he do that, Fuller could turn into one of the top three receivers in this class when it’s all said and done.