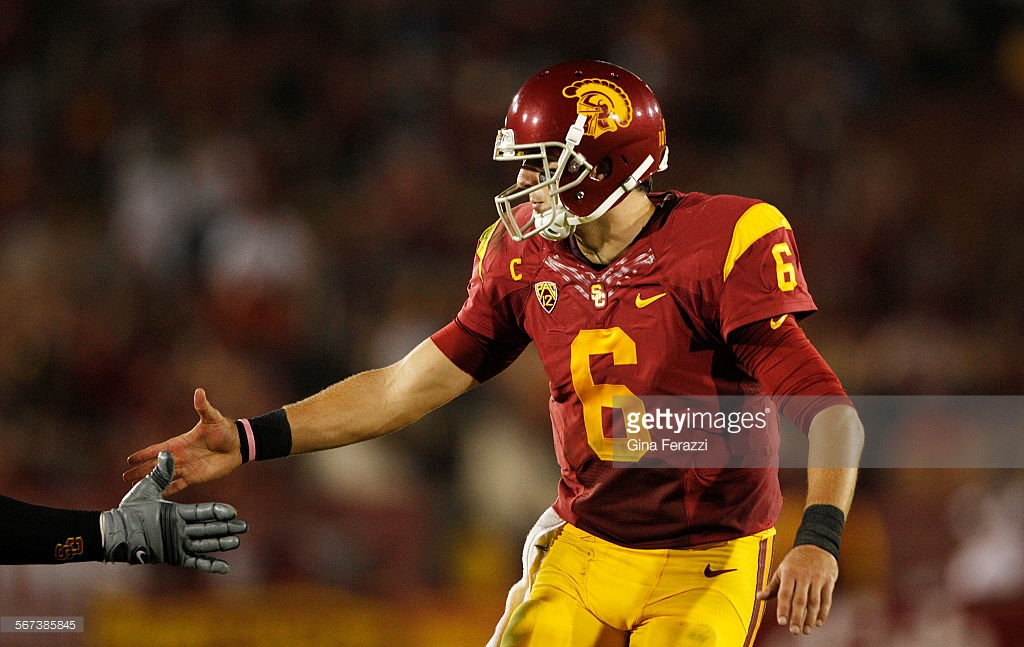 Another look at a quarterback today. USC’s Cody Kessler.

-Shows good feel for the pocket and moves well in the pocket to avoid rush
-Not afraid to stand in and take a shot to deliver the ball accurately
-Quick, accurate delivery on short-to-intermediate routes
-Works through progressions quickly
-Rarely makes mistakes with the football
-Underrated accuracy and velocity on the move

As a three-year starter for the Southern California Trojans, Cody Kessler put up some outstanding numbers for loaded offensive attacks.

By putting up those big numbers, Kessler’s name was once in the discussion for the top quarterback in this draft class, but a rather mediocre year (by his standards) in 2015 and plenty of question marks and concerns on game tape has pushed Kessler down the tier of QB prospects this year.

While at USC, Kessler wasn’t the physical specimen that most QBs are, he was a productive passer that took what the defenses gave him consistently to move the offense up and down the field with precision.

That being said, Kessler doesn’t have one trait that is exceptional.

He’s not a guy who is going to “wow” you with his arm strength or leave you impressed with his athleticism, but he’s a guy that just gets it done more often than not.

Let’s start with the good.

At USC, Kessler had plenty of talent at his disposal; both on the offensive line and at weapons, but often times Kessler was under heavy pressure.

Fortunately for Kessler, he developed a good feel for the pocket and was able to maneuver around efficiently to open up new passing lanes while giving his receivers a few extra seconds to create separation.

Kessler isn’t a great athlete by any stretch, but the subtle movement to the side created a lane for him to step up into to make the throw down the middle of the field for a big gain.

This was a common occurrence with Kessler on the tape. Out of all the QBs in this class, Kessler might be near the top in terms of pocket movement and feel for the rush.

Along with good movement and awareness in the pocket, Kessler also displayed the ability and willingness to hang in the pocket and take some big shots just to be able to complete passes down the field.

With the free rusher bearing down on him in the red zone, Kessler hangs in for that extra second to deliver a strike to his receiver for the score. He’s not the type of guy to bail out or avoid contact; he’ll step into throws with an impressive willingness while taking shots from every which way.

His teammates at the next level will love that. Toughness is a good quality to have for a QB, and that’s what Kessler displays.

Along with being a tough QB, Kessler is also a bit underrated as an athlete despite not blowing people away with testing numbers.

When you think of Cody Kessler, you don’t think of a QB that can make plays when he pulls the ball down and runs, but one tape you’ll see a QB that is willing to take some shots in the open field just to move the chains or fight for the end zone.

In both clips you see Kessler tuck the ball and make some big plays on the run. Again, he’s not a guy that is going to run away from you or juke you in the open field to put you on a highlight reel, but he’s a good runner with good awareness of what is surrounding him on the field.

That run against Arizona State gave the Trojans some much needed breathing room in the shadow of their own end zone. He could have easily ducked out of bounds as the defensive lineman closed in on him, but he made the split decision to make the move back towards the inside to move the chains and give the Trojans another three downs to try and gain ten yards once again.

In the second clip, Kessler faces immediate pressure off the edge from Arizona State, but he tucks the ball and makes a break for the goal line. Most QBs in that situation would slide down short of the first down, but Kessler puts his shoulder down and bowls into the end zone.

He’s not going to dominate people with great tools, but you can’t measure heart and desire. That was on full display here.

Along with his underrated ability to make plays with his feet outside of the pocket, Kessler is vastly underrated as a passer on the move.

Granted, he doesn’t have a strong arm so he’s not going to be able to flick his wrist on the run and rifle a pass down the field, but he can hit receivers in stride when on the move.

This play was all set up by his ability to slide around in the pocket to extend plays while opening up throwing lanes.

On the move, Kessler is able to hit JuJu Schuster on the run across the middle, which is an area that Kessler excels. Granted, that’s a throw across his body towards the middle of the field, but he made it work with pinpoint accuracy.

While he was a prolific passer at USC in terms of TD-INT ratio and accuracy, Kessler leaves a lot to be desired with his build (6’1”, 220 LBS) and limited arm strength, which really jumps out on tape as his deep passes die in the air and his accuracy really falls off the table in this area.

In the first clip Kessler has plenty of time to put the proper touch and accuracy on the throw, but he just lets it rip, sailing it five yards past his receiver. This was sadly a common occurrence for him.

The second clip is even more concerning as the ball simply dies in the air and falls short of his intended receiver in the middle of the field. This is an NFL throw and he didn’t show the ability to connect.

Overall, Kessler has plenty of experience on a big stage in a pressure situation, but I don’t think he’ll ever develop into a long-term starter in the NFL due to his arm strength issues, lack of success throwing the deep ball and his limited build, which is below the standard in today’s NFL.

That being said, he’ll likely carve out a long career in the league as a valuable backup in the form of Arizona’s Drew Stanton, whom Kessler reminds me of in many ways.