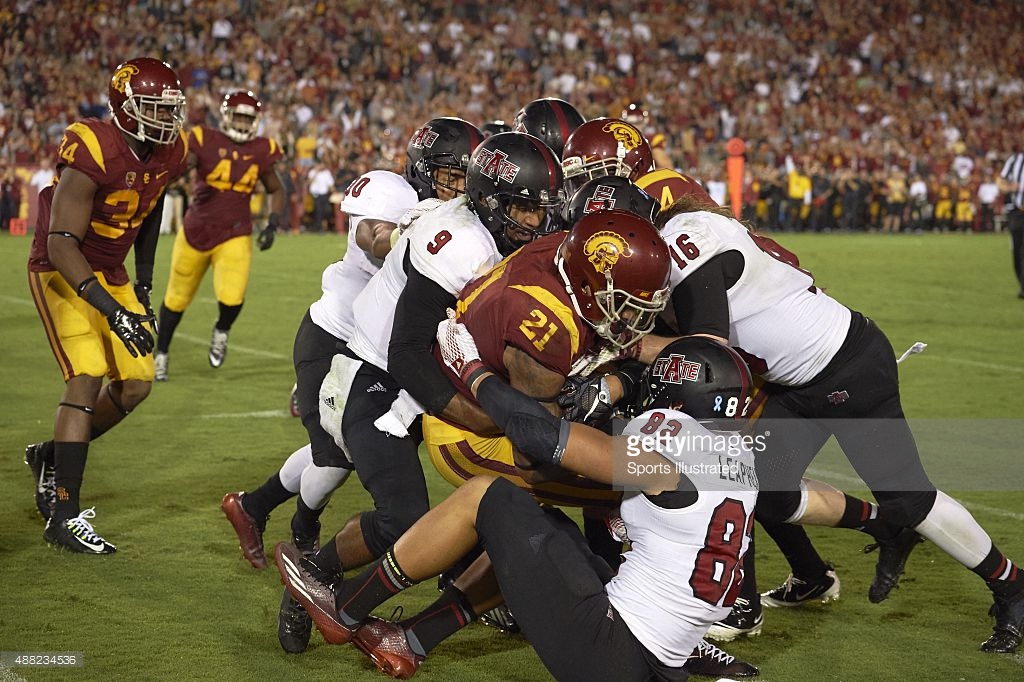 One of the more interesting players in this year’s draft. USC’ Su’A Cravens.

-Good open field tackler that reacts quickly to what’s happening in front of him
-Sets edge well against the run
-Uses extension and leverage to his advantage, shoots hands quickly at the snap
-Smart football player with great instincts
-Great range for linebacker in coverage
-Can line up in the slot and cover move TE’s

-Recorded 10.5 sacks and 32 tackles for a loss in two years as a linebacker at USC
-Named First-Team All Pac-12 in 2014 and 2015
-Ran a 4.69 40 at USC Pro Day
-Cousin of Miami Dolphins tight end Jordan Cameron and San Diego Chargers linebacker Manti Te’o

Su’A Cravens might be one of the most polarizing defensive prospects in this year’s class due to his ability to play multiple positions at a high level, but where he fits at the next level is a major question mark.

Many see him as a linebacker/safety hybrid player (a term I absolutely hate) in the form of Arizona’s Deone Bucannon, but he’s not even close to the type of athlete that Bucannon is in terms of instincts and explosiveness.

Cravens also isn’t experienced enough as a safety at the collegiate level to make the switch back to the position in the NFL, leaving him as a possible inside linebacker in a 3-4 front or a WILL/SAM in a 4-3 front.

Personally, I see Cravens as a WILL in an even-man front where he can drop into coverage, line up in the slot against move tight ends at the next level, while also serving as a decent blitzing option off the edge.

Just please don’t compare him to Troy Polamalu or even Bucannon moving forward. You just need to put on his USC tape to realize what a silly comparison that is.

Lets move to what Cravens does well at and struggles with on the field.

As a defender in the box, Cravens is very smart and is able to read and react quickly to what’s happening in front of him.

Dropping slightly into zone coverage while keeping his eyes on the quarterback in the clip above, Cravens is able to get downhill quickly to make the stop in the open field against Nebraska’s Tommy Armstrong.

Although the route to the ball carrier isn’t the best it could be, the fact that Cravens got such a great job on the play allowed him to make the tackle in space.

Adding to his great instincts as a defender, Cravens uses leverage and extension to his advantage when setting the edge. Despite having a small frame for the position, Cravens is a physical player who can stun blockers with his initial punch and drive off the ball.

The low man in these instances seemingly always wins, which Cravens does in a big way on this play. By driving Cal’s Kenny Lawler back into the backfield, he disrupts the play in a big way, forcing Daniel Lasco to try and stretch the run towards the sideline, allowing his teammate to clean up the play in the backfield.

As a blitzer off the edge, Cravens has the athleticism to make the play in the backfield while avoiding blockers rather than taking them on straight up.

Lined up in the slot to start the play, Cravens shows the ability to close down on the ball carrier quickly before breaking down to make a sound tackle behind the line of scrimmage.

While he makes a habit of breaking down on nearly every tackle, there are plenty of examples of Cravens really struggling to get off blocks before lunging for arm tackles that opponents can break right through.

This is against Notre Dame’s CJ Prosise, who is likely to be drafted early in the upcoming draft and has a similar frame to the average NFL running back.

At the snap, Cravens doesn’t react quickly, allowing the Fighting Irish tight end to get on him quickly in space, locking him up on the block.

As Prosise approaches the block, Cravens is able to get off the block, but he’s only able to lunge at him as he races by for the score.

If he were more of a quick-twitch athlete and had more power and explosion, he might have been able to get off the blocker faster to make the play, but this is who Cravens is as a player.

He’s not flashy and won’t make incredible plays like Bucannon or a guy like Polamalu once did. But he’s solid and is in the right position more often than not.

In terms of rushing the passer, Cravens is hit-or-miss. Most of his sacks came on free rushes at the quarterback, but when he’s able to run a twist or stunt with the defensive end in front of him, he has the athleticism and speed to beat unsuspecting offensive linemen.

While that’s a solid twist off the edge where he’s able to use his straight line speed to beat the tackle for the sack, he’s just not consistent enough to make this play a regular part of his game.

More often than not, this is the type of rush he turns in off the edge.

He’s undersized for the position, doesn’t have great speed off the edge and really doesn’t know how to attack the blocker unless he’s able to beat him off the ball.

Unfortunately, this was a common occurrence with Cravens. Although the sack numbers look good on paper, he’s just not a player that can beat an offensive tackle one-on-one with regularity.

That being said, he’s a good enough athlete and has the toughness and instincts to make it work as a linebacker at the next level.

It’s important to keep in mind that he’s still learning the nuances of the position, having made the switch just two years ago.

With the numbers he put up in two years as a linebacker in more of a 3-4 role, Cravens should excel in a 4-3 where he can read and react to what’s in front of him while also being able to drop into zone/man coverage to make plays on the football.

On top of his job as a linebacker, Cravens can make an immediate impact as a special teams terror, which he did consistently at USC.

He might not be able to start right away or see a ton of snaps in year one defensively, but what he can do is contribute right away on special teams, mainly on kick and punt coverage.

Remember how I said he’s a strong tackler in space? He’s not going to blow an assignment on kick and punt coverage, opening up a big lane for a big return. He’s just solid, and that’s what you need on special teams.

That being said, that’s not his ceiling at all. With the right coaching and more experience at the linebacker position, Cravens could develop into an above-average long-term starting linebacker in the NFL.