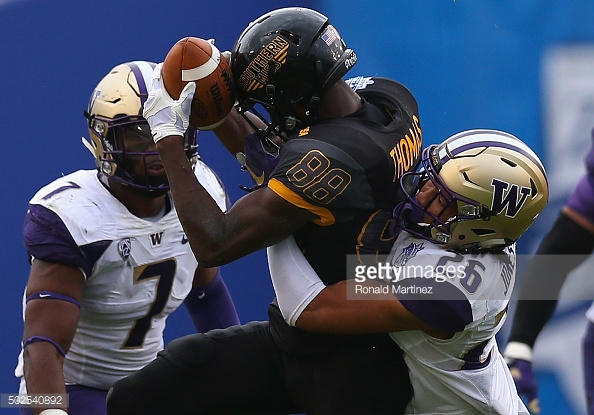 -Struggles to create separation at the top of routes
-Thin frame for position, but has build to add muscle mass
-Has a history of drops that can be chalked up to focus issues
-Stiff hips give him problems in and out of cuts
-Press coverage is a thorn in his side at times
-Average athlete inside first ten yards

-Collected 71 receptions for 1,391 yards and 14 touchdowns in 2015
-Played just two years of FBS-level football
-Hauled in at least one touchdown over final 10 games of 2015
-Was one of biggest NFL Combine snubs in recent memory

Southern Miss wide receiver Mike Thomas is arguably the most divisive receiving prospect in the 2016 NFL Draft, and for good reason.

While most see the eye-popping stats and the absolutely absurd catches that Thomas makes more often than not, others zero in on the drops issue and the limited separation at the top of his routes as big reasons why Thomas might not cut it at the next level.

Standing just 6-feet-1, Thomas has a slender frame for the position, but he’s a tough receiver that isn’t afraid of contact and fights for every possible inch on the field snap-to-snap.

As a receiver, Thomas won’t be confused with guys like Corey Coleman and Josh Doctson in terms of separating at the top of routes, but Thomas is a physical receiver that can play through contact at a high level.

In this clip Thomas runs a simple post route into the center of the field. The quick stem at the top gives him just enough separation, but the Western Kentucky corner is able to recovery quickly, putting him in a position to try and make a play on the ball through Thomas.

However, by using body positioning to his advantage, Thomas is able to absorb the contact and make the great catch for the touchdown.

Along with his ability to play through contact, Thomas is a high-flyer that makes some incredible catches while showcasing a strong ability to track the ball in the air at a high level.

All three of the clips above are from the game against Louisiana Tech in which Thomas simply went off, hauling in seven passes for 162 yards and a score, including the likely catch-of-the-year in the first clip.

Thomas might have the best body control and ball skills of any receiver in this class, and it’s probably not close.

The first clip is an NFL-caliber catch in the end zone. By high-pointing the football, Thomas shows off his ridiculous catch radius.

In the other two clips, Thomas tracks the ball so well and contorts his upper body to find the ball in the air, making the big catch look routine.

In each instance, Thomas has a defender in close proximity, but by tracking the ball at an elite level, Thomas is able to adjust quickly to the throw before the defensive back really even knows what’s coming. You can’t teach what Thomas does in those three clips.

On top of his absurd body control and upper body flexibility, Thomas is as tough as they come at the position in this class. He’s not Coleman after the catch, but he’s a strong runner that refuses to go down on first contact.

Once again, Thomas abuses a Louisiana Tech defender. After making the catch across the middle of the field, Thomas can spell the end zone.

He doesn’t look like a strong receiver, but that’s why looks can be deceiving.

In the open field Thomas deploys the stiff arm to throw the defender to the ground before almost fighting off the second defender.

You can’t measure heart and desire, and Thomas has plenty of both.

Outside of his strength as a runner, Thomas can also lull a defender to sleep before exploding past him.

On a big stage, Thomas put on a show against the Washington Huskies.

Look at the transfer or weight and the explosion through the seam after the catch by Thomas.

Through four games of his film, I hadn’t seen that type of explosion as a runner from Thomas at all, so I was completely caught off guard, much like the Huskies defensive backs.

He has so much raw potential for the position that should he land in the right situation he could blossom into a star receiver.

That being said, he does have some areas to work on, namely his work against press coverage.

With his long, lean frame, Thomas is an easy target for the press at the line. He has the footwork and the speed to get past the press, but it’s a consistency issue for Thomas.

At the snap Thomas doesn’t set up any moves to beat the press, allowing the Washington corner to lock and press him to the sideline, taking him out of the play before he could even develop his route.

Once he gets to the next level, Thomas will have the proper coaching to help him develop a plan to attack the press.

Overall, I’m really high on Mike Thomas. He’s easily in the top 10 at his position in this class and could work his way into the top five when we look back on this class in a few years.

His ability to play through contact and make tough catches with defenders draped on him will help him succeed at the next level despite not being able to create a ton of separation at the top of his routes.

While he’s not going to be that big-name receiver like an Odell Beckham Jr., don’t be surprised if/when Thomas comes up with a handful of Beckham-like catches next season.