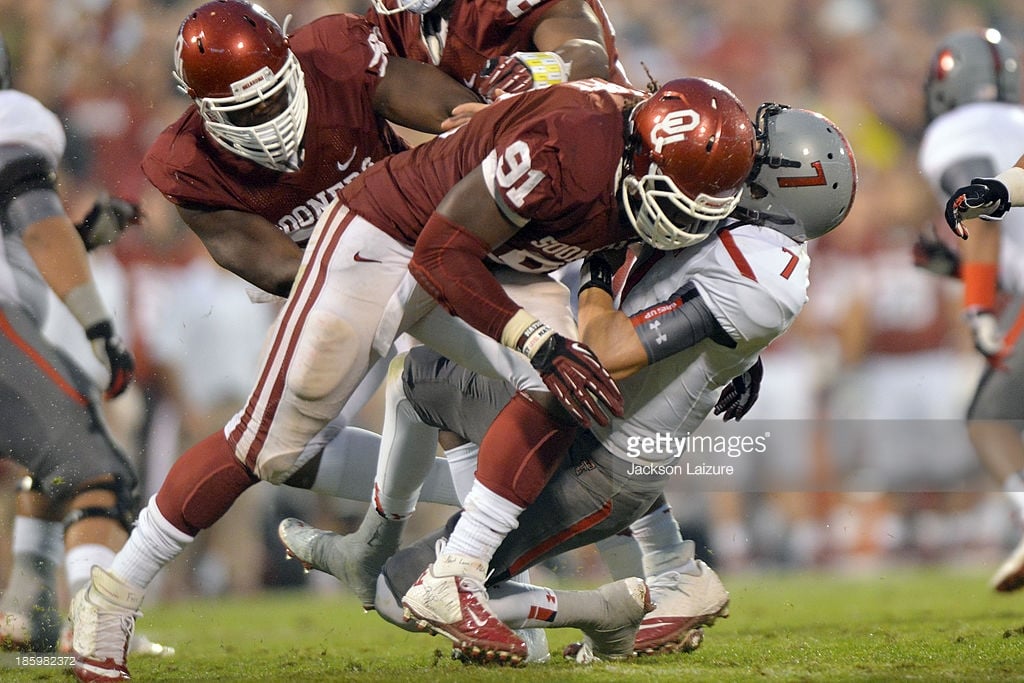 -High motor player that pursues ball with a vengeance
-Creates extension well off the ball by shooting hands out quickly
-Versatile enough to line up all over the line
-Can rush from 4-pt, 3-pt or standing up
-Has a knack for getting hands up in passing lanes
-Good size/build for position
-Raw with plenty of room to develop

Based on his size and what he was asked to do at Oklahoma over the last four years, it’s hard to pinpoint where Charles Tapper projects to play in the NFL.

Despite being a legitimate threat each and every snap to disrupt plays along the defensive line, Tapper leaves a lot to be desired more often than not. While the career stats look good on paper, nothing really jumps out at your when Tapper plays.

Depending on how you view football players that could be a good or a bad thing regarding Tapper.

As a defensive lineman, Tapper isn’t a flashy player at all, but he’s a high motor, high energy guy that gives it his all on a large majority of the snaps that he plays. Granted, there are times where he’s slow off the ball or doesn’t really give a ton of effort, but some of that could be chalked up to the up-tempo offenses that Oklahoma faced every week in the Big 12.

That is much different than what we saw from Oklahoma State’s Emmanuel Ogbah, who just seemed to loaf in big spots.

As a defensive lineman in Norman, Tapper was versatile enough to move all over the defensive line, lining up as a 5-tech, a 3-tech and even deploying as an outside linebacker where he could rush while standing up, or drop into the short zone to disrupt throwing lanes.

Due to his usage, it raises questions as to where he fits in the NFL. He’s not a serious pass rushing threat that draws extra attention and he’s not fluid enough to drop into coverage comfortably or run with tight ends and running backs in coverage.

At this point, Tapper likely projects as a 4-3 DE who can hold his own against the run, but the senior needs some serious work as a pass rusher to allow himself to stay on the field in obvious passing situations.

Through his first three years at Oklahoma, Tapper didn’t have a plan as a pass rusher and usually just crashed forward hoping to knock over the offensive lineman across from him.

That rarely worked, especially due to the fact that Tapper often came off the ball far too high with his pad level.

However, when he was able to keep his pads low, Tapper was able to create separation from the offensive lineman with his extension and then drive the lineman into the backfield.

Granted, this clip was against the run, but Tapper does a great job of coming off the ball hard, getting up underneath Baylor’s Spencer Drango and drives him into the backfield.

Then there’s this part of his game that is frustrating.

Tapper stands straight up and gets driven backwards quickly by the Alabama offensive lineman. While he does get knocked off the ball, Tapper has the awareness and ability to get off the block to make the play on the Crimson Tide running back.

It’s nice to see him not give up on the play after taking the loss against the offensive lineman at the snap, but Tapper needs to work on getting off the ball quickly on a consistent basis allowing his speed and strength to give opponents a significant problem at the snap.

Then there’s this type of play from Tapper that happens a lot on tape.

By getting off the ball slowly, Tapper allows the left tackle to hook him inside, giving the option the edge against the Oklahoma defense.

This can’t happen as a defensive lineman on the edge, and unfortunately for Tapper it happened far too often. That has to be corrected at the next level, and I’m confident that it will with the right coaching.

As a pass rusher, Tapper needs plenty of work with hand usage and footwork, but during the 2015 season he really seemed to develop some sort of plan as a pass rusher, which led to his highest sack total of his career at Oklahoma.

Against Kansas this past season, Tapper physically dominated the competition across from him, which opened a lot of eyes to the physical tools that the senior possesses.

He’s certainly raw as a defender, but there’s plenty to work with.

Look at the burst off the ball at the snap. By doing that, Tapper puts some serious pressure on the offensive lineman, which allows him to set up his impressively quick spin move to get right by the guard with ease.

Tapper does the same thing later in the game, which is just as impressive as the first time. When he gets off the ball quickly and has a plan on how to attack, he’s very hard to block, especially with his speed.

It’s all about getting him to do it on a consistent basis, showing that he deserves to be on the field for every down.

When he does things like this, he’s showing he’s willing to work and wants to make every play possible.

His motor on this play blew me away. That’s Amari Cooper he chased roughly 60 yards down the field to save a touchdown. Most defensive linemen usually give up on the play and let their teammates make the play, but Tapper is in full-on chase-mode once Cooper slips by the few defenders in front of him.

It might not look “special” on tape, but having the speed and work ethic to chase down a receiver looking to score will go over very well with coaching staffs.

Overall, I think Tapper can develop into a solid 4-3 DE that can hold up well against the run while also being able to develop a pass rushing arsenal to haul down the opposing QB’s between 5-6 times a season on a consistent basis at the next level.