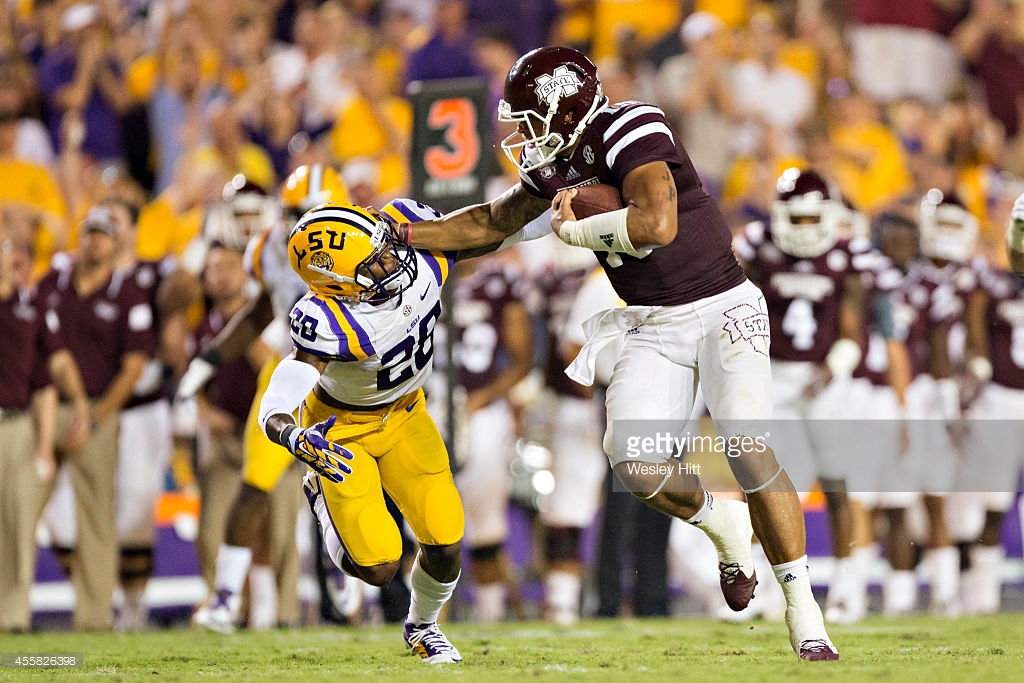 – Sticks his nose in run piles, scraps for the tackle
– Smooth hips mirroring receivers off the line
– Aggressive playing ball
– Disruptive as blitzer, high-motor in the offensive backfield
– “My ball” mentality
– Hustles to the play, nose for the tackle

– Slow exploding out of his break
– Limited range
– Doesn’t have IQ to recognize plays, plays 7 yards off on a 3rd and 5
– Too aggressive, hasn’t learned to be patient, particularly without athleticism to overcome
– Bad tackling angles
– High-hipped backpedal, can trip and lose balance
– Drops head when tackling
– Is not “sticky” in coverage

Mills turned in a disappointingly pedestrian combine, and that shows through in moments on the field. Here, he takes the correct read out of the stack (an NFL-level thought process that some corners can surprisingly still struggle with out of bunch concepts). However, he lacks burst or acceleration out of the receiver’s break and plays too far upfield. It’s a 3rd and 3, and there is no reason for him to be almost two yards uphill from the receiver when he should be more knowledgeable of down and distance. He’s caught out of position and doesn’t have the athleticism to recover.

In a 2nd and 19 here, Mills is playing centerfield in a Cover 1 defense. QB Nick Marshall stares down the read (then-future Steeler Sammie Coates) the whole way, meaning Mills should be reacting that way. When he lets it go, Mills is far out of position and doesn’t have the range to catch up either. He even looks to give up on the play before the ball is caught and slows down a step, only to see Coates make the catch and fight through for the score. There’s a lot Mills could work on from this play, including reacting to the QB and not giving up, but if his range is this limited, he’s just not going to get there either way.

Mills, lined up on D’haquille Williams in the slot here, and he flips his hips quickly. Note how smooth he is in getting around and reading the WR’s eyes to figure out the ball’s arrival. He plays through the receiver aggressively to break up the TD. That’s the way you want to scrap for the ball, excellent coverage downfield.

Mills reacts downhill well when the game is simplified for him. Ask him to do anything such as (comparatively) complex as read the quarterback or flow from single-high, and he’ll struggle. But put him in space and make the reads easy, like this one? He’ll diagnose and attack quickly to make the play, like here on the opening snap of LSU’s 2014 bowl game.

One of the better blitzing DBs I’ve seen so far in this class, Mills explodes downhill off the snap. The design of the play has Kenyan Drake come across the offensive formation after the playfake from Jake Coker. It puts Drake at a massive disadvantage moving in space and the Tigers’ blitz off the edge plays right into it. Mills is able to close and make the sack before Coker even completes his arc.

While position versatility undeniably has its value in the NFL, it also requires some corresponding NFL readiness. Jalen Mills may have the former, but he is severely lacking in the latter. He doesn’t have the mental acumen or field range to truly settle in and play free safety, nor the required physical frame to stand up long-term in the box at the next level. His cornerback play is adequate but his size may once again limit him. He probably projects best as a nickel corner, but even that is touchy.

He doesn’t have any overwhelmingly dominant physical or athletic characteristics to make up for the gambles he makes in coverage and on the plays. While he comes downhill quickly, his mental processing to get there isn’t up to NFL par. And while he plays the ball aggressively, his frame still means he’ll get boxed out by larger receivers.

In terms of former LSU defensive backs prospects and their relative draft position, he projects closer to #138 overall Tharold Simon (2013) than Jalen Collins at #42 overall (2015). Although some may look at him on paper and see a versatile defensive back like the Honey Badger, Tyrann Mathieu, he does not have nearly enough athleticism to compensate for a comparison like that. He will probably start games in the NFL, but likely not as a day one “locked in” player. He’ll need time to adjust to seeing the game on an NFL level, much less that which he saw in college.