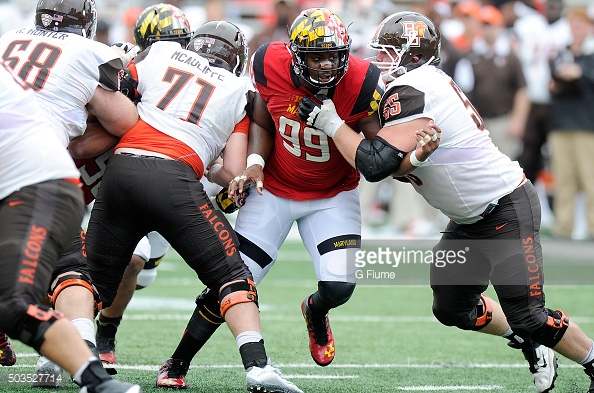 – Understands when to get his hands up
– Adjusts pass-rushing, changes move
– Good push-pull swim
– High endurance, able to play a lot of snaps
– Has shown flashes of being able to re-set feet and not get washed out against run
– Keeps feet moving
– Good short-area quickness, closing speed

– Engages with head up (good) but eyes down (bad)
– Lacks play strength
– Inconsistent as a pass rusher
– Stands up too often, loses his base
– Lacks explosion off the snap, bulk to move linemen
– Hands too passive
– Needs killer instinct? Tiptoes around some hits

As you might expect from any late-round DL, Jefferson has his splash plays, and his ones to forget.

Lined up at 3t on the left here, Jefferson slants weak and whips the right guard into the backfield. He doesn’t have the ability to close and make the play on the back, but he did create the disruption necessary at the line. However, when the back has a hole this big, that’s all irrelevant.

Lined up as what looks like a 2i here, Jefferson’s initial rush of a swim weakside gets taken away by the sliding guard. He then recovers with a bullrush into the center for the split sack, with a vicious punch to finish him. I love the creativity and willingness to improvise during the play to get to the QB depending on what the line is presenting with as options.

The strongside 3t, Jefferson gets absolutely locked out by South Florida’s LG Thor Jozwiak here. To make matters worse, Quinton Flowers had been running wild on the Terps scrambling all day. Jefferson tries to improvise and disengages, running towards the middle of the field. He leaves his contain lane wide open, leaving Flowers to scramble for 27 yards on a 3rd and 5. Have to play smarter and more disciplined than that, especially on a money down like this.

Jefferson just lacks any kind of disengagement move or handfighting, really. The strongside 3t, he slices inside and rocks the RG, but he stands up too far too fast and fails to ever attempt to get away beyond just swinging his shoulders. It’s an excellent block by Wolverine G Kyle Kalis, but Jefferson has to get away somehow to close down the line.

What Jefferson does retain is some excellent field awareness and play recognition, as shown here. Watch him keep his right arm free and make a tackle attempt that punches the ball out in the process. Great job creating an opportunity that the defense just wasn’t able to recover.

Where to begin with the local prospect? Jefferson is a classic case of stats vs. tape. On paper, he stacks up compared to most top players with created turnovers and impact plays for negative yardage. On tape, he’s streaky and fails to jump off the screen.

Jefferson offers next to nothing trying to collapse the front of the pocket as it stands. Miscast as a college interior defensive lineman but an NFL 5t DE, he definitely struggled against the inside three for offensive lines. Both his weight and skillset are far more suited to playing outside, where he can use his short-area quickness to challenge OTs who set too wide. Even then, he remains tremendously raw. He has few well-developed moves, and although he attempts counter moves, he just isn’t ready to truly attempt them yet.

Jefferson coming out honestly surprised me. I think he’ll need more time in the weight room and some NFL sand in his pants before he can truly come out and make an impact on the line. He would have been better suited staying in for another offseason of coaching and fresh tape to prove that he isn’t a one-year wonder.

Although he has shown the flashes of being able to play line at an NFL level in college, he couldn’t do it consistently. It’s clear that the scheme and role he was cast in simply asked the wrong things of him. Jefferson will need refinement in his pad level and hand usage right away, and when he gets those down will start to put it together. From there, he’s athletic enough to have a ceiling worth developing.