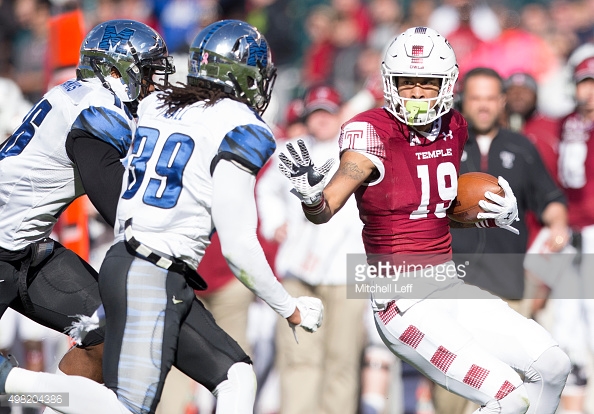 -Not a great route runner, seems to float around at times
-Slow to get up to full speed off the ball
-Rounds off a lot of routes
-Really struggles with consistency with hands, has problems with focus at times
-Tries to do too much with short passes looking for homerun, which can lead to negative plays
-Doesn’t play through contact well
-Rail thin frame for position to go along with surprisingly small hands (8 3/8 inches)
-Runs routes with elevated pad levels, often tipping his path off

-Ruled academically ineligible by Temple for 2014 season
-Originally committed to Owls as cornerback before making switch to WR in spring ‘13
-Quit the team following 2013 spring session before returning as walk-on in August ‘13
-Ranks second in school history in receptions
-Scored 16 touchdowns in two seasons
-Ran a 4.36 40 at Pro Day and recorded 36.5” vertical

Robby Anderson sure does have a flare for the dramatic when it comes to acrobatic catches.

Standing 6’3” and possessing 30-inch arms, Anderson is rail thin for a wide receiver, but he makes up for it with his willingness to go into traffic to make plays on the ball that other receivers might think twice about.

That’s what makes Anderson so appealing as we draw closer and closer to the NFL Draft at the end of April.

Although Anderson isn’t a good route runner, he really excels at two routes: the post route and the double-move stop-and-go on the outside looking for the homerun ball.

With his blazing 4.36 speed, Anderson can really put the pressure on opposing secondary’s that are worried about him beating them over the top. That’s where is impressive double moves come into play.

In a way, Anderson is very similar to Ohio State’s Michael Thomas in the way he’s able to sell his double moves, leading to a big bite from corners, resulting in Anderson blowing right by them.

You would think that with defenses worried about him getting behind them for big plays that corners wouldn’t bite so quickly on the double moves, but Anderson does a great job of nearly coming to a complete stop while sinking his hips, selling the stop route, before then turning on the jets to blow by the stunned defender.

The first clip is against Houston’s William Jackson III, who is likely ticketed for the top 20 picks in this month’s draft.

Anderson is able to set up Jackson with the burst vertically at the snap before slamming on the brakes, selling the stop route. As Jackson bites, Anderson is able to flips his hips forward again, allowing him to get deep as Jackson scrambles to recover.

In the second clip, Anderson does nearly the same thing, this time against East Carolina cornerback Josh Hawkins, who bites so hard against the stop-and-go route.

The subtle turn inside with his head, shoulders and hips really sells the route for Anderson. As a vertical threat, this is a good route to have in his bag of tricks at the next level.

Although the pass from P.J. Walker was very poor, Anderson should receive better play from the QB position at the next level, which would allow him to put up even bigger numbers.

Outside of his impressive double moves, Anderson also really excels on the post route.

It’s not common for receivers to use the stutter at the top of a post route stem, but Anderson makes it work quite often.

Along with the stutter, Anderson does a great job of using subtle head fakes to throw the defender off slightly.

However, in the second clip against Toledo, Anderson gives away where he’s going as he’s looking inside while he’s deploying the quick stutter step.

An NFL defensive back will be all over that, so he’ll need to clean that up. But what I really like in both instances is his ability to reach up and rip the football out of the air with strong hands.

That’s one heck of a catch by Anderson over the middle of the field.

On this play alone, Anderson showcases his huge catch radius while wowing people with the impressive one-handed catch.

Despite having small hands for the position, Anderson sure does know how to make great grabs.

Remember how I said Anderson isn’t afraid to go over the middle or go up unprotected to make a play on the football? That catch happens with him being well-exposed to a potential huge shot and he just doesn’t care while going up in a crowd to make the play on the ball.

That’ll win over plenty of brownie points with his QB at the next level, should this continue.

Overall, I think there is plenty to work with when it comes to Robby Anderson as a receiver.

With his impressive speed both in the deep passing game and the short-to-intermediate game, Anderson is a significant homerun threat any time he touches the ball, but he has to put on some serious weight to his frame to give him the best possible shot at breaking tackles after the catch.

At this point, he’s too light to do that on a consistent basis.

If he can clean up some of his route running and add a few additional routes to that tree, cut down on some focus drops and add some weight, Anderson could be a serious steal for a team late in the draft looking to take a chance on a kid who’s played just two full FBS-level seasons at the position.