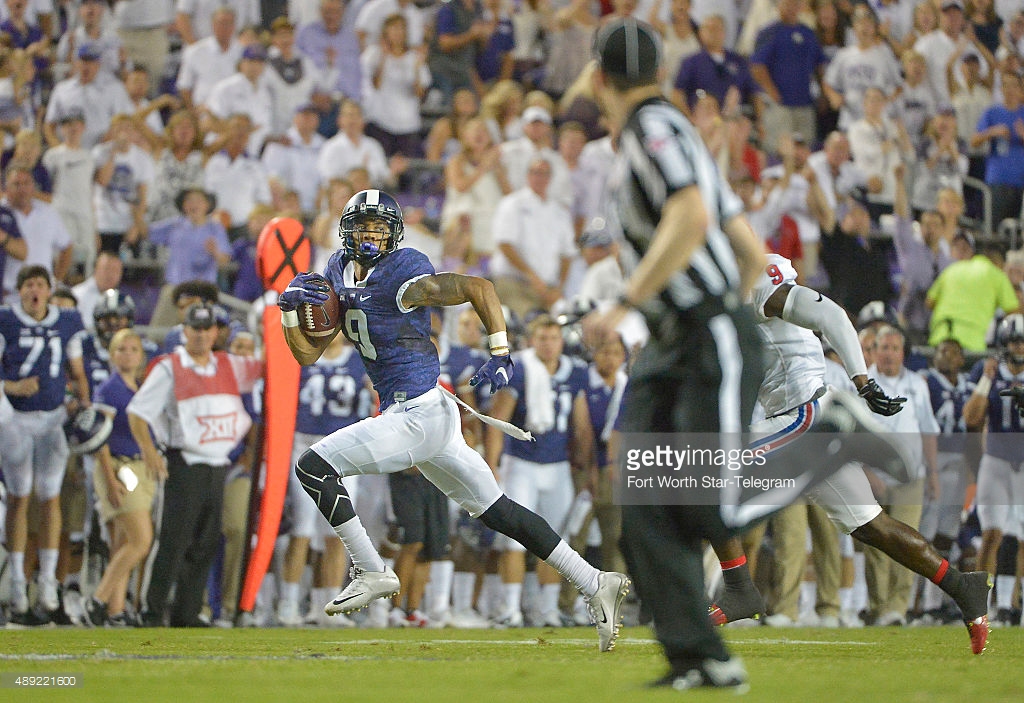 Look at one of the top receivers in this year’s class. TCU’s Josh Doctson.

– Mauler when the ball is in the air, will high-point and come down with it
– Will block downfield, willing to put head in and play through whistle
– Great footwork, too fast to press
– Huge catch radius
– Picks up YAC, effective stiff-arm
– Great hands, few drops
– Sells defensive PI
– Adjusts to poorly-thrown balls
– Will take a hit to make a catch

The basic idea behind this play concept is what’s taking football by storm. In the NFL, it’s a playaction to TE Seam, but the idea itself originates in college. Typically it’s more of a read-option to WR slant that sees the QB read the linebacker. If he drops, hand the ball off. If he steps up against the run, throw the ball in behind him.

This is a playaction to WR1 dig route. The LBs step up to protect the run, leaving the middle of the field wide open for Doctson. His route is sloppy, rounded off, and the ball is placed behind him. However, he absolutely out-muscles the CB for the ball and gets his frame in the way to make the reception. I saw TCU run this concept to Doctson 3-4 times in the 3 games I watched – his ability to box out the corner is easy yards.

As a receiver, what’s one ability that’s going to translate to the NFL? How about this. Aggressive high-pointing of the ball and attacking it at its highest point. Doctson runs his route right to the middle of the CB, sinks his hip to get outside and puts out his hand – great technique. From there, expecting the ball, he gets his head around looking, and soars to meet it (with a little boost from a bit of a push-off). There’s that combine-tops vertical jump.

His routes aren’t incredibly polished, although this is a nice head-sell to catch the corner flat-footed biting inside. When you have this much ability playing the ball, however, you don’t need great routes to create space at the college level. The throw is high and behind, but even that doesn’t matter considering Doctson is able to go up and get it.

Doctson can be an animal off the line. Against press coverage, his footwork is too fast and gains ground too quickly for cornerbacks to really challenge him and be physical. He’s just too quick off the line to be checked.

This route is a little better than some of the others I’ve shown, but particularly noteworthy is Doctson’s adjustment to a ball thrown well behind him even with a safety lurking over the middle. Trevone Boykin had to get this throw off under duress and laid Doctson out a bit, but he held up for his QB anyway.

Unlike many WRs, Doctson actually is willing to block off the line. Here, he runs his assignment downfield with good hand placement inside. However, as you can see from the feet just at the top of the screen, he isn’t able to sustain the block beyond that initial drive. This is something a coach will have to work with him on, because receivers who show the willingness to block like this are few and far between.

For being as good as he is, there is really not nearly enough buzz about Doctson. He is aggressive at the catch point, an absolute monster when the ball in the air. In the passing league we see today, Doctson could easily come in and take things by storm with a 60 catch, 1,200 yard, 8 TD season. And yet, that’s not really getting enough buzz in draft circles.

Doctson has a lot of NFL-ready attributes, but his biggest flag right now is his routes. He doesn’t have a full route tree right now, and the routes he does run are rounded off and lazy. I really like the way he uses his feet to get off the line and his head to clear space downfield, but apart from that, his routes are lackluster and his main method of beating DBs is through his ridiculous leaping ability. His blocking is also less than optimal for the NFL level as it stands, but he does show the fire to block, which will excite offensive coordinators.

His catch radius is obviously good above the head with his leaping ability, but Doctson also shows some nice skills to snag balls placed too far ahead of and behind him at body level. His hands are sure and he seldom short-arms passes. He also shows good spatial awareness, trying to get his feet in bounds no matter where the throw is placed.

Doctson will likely have an adjustment period to the NFL as he also learns big-league concepts instead of the TCU spread offense which schemes him open at times. However, if you’re taking any WR in this draft one-on-one with a fade to the corner of the end zone, it’s Doctson hands down. Throw it up and let him get it. He will.