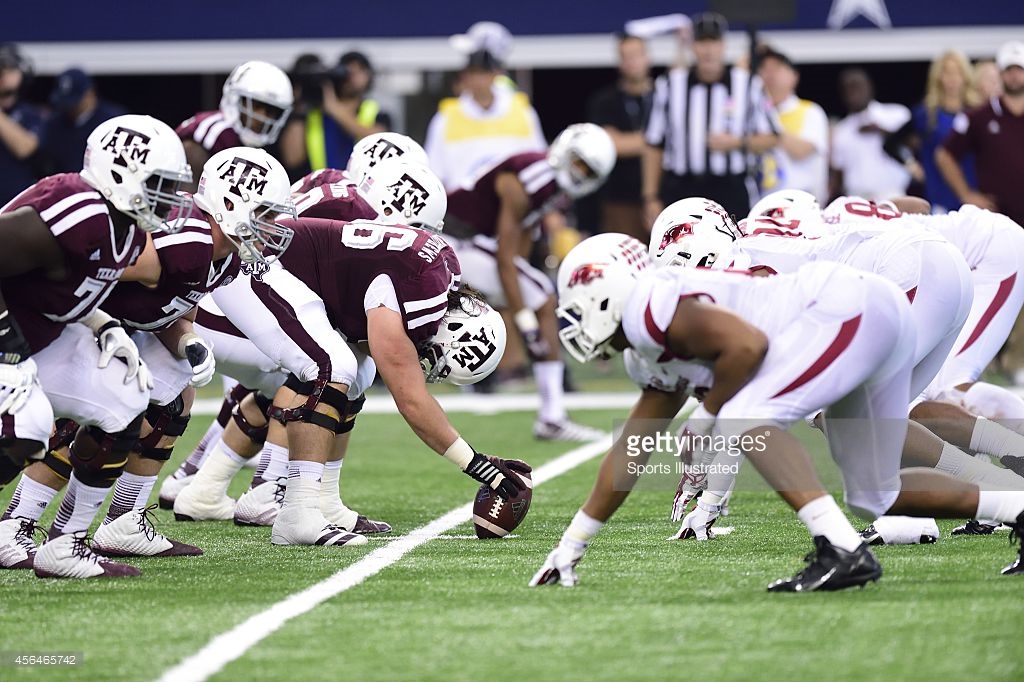 Getting a good look at the interior offensive line with Texas A&M’s Mike Matthews.

– Makes line calls, indicates blitzers
– Good at getting himself into space
– Anchors and drives, can sustain run blocks
– Tight, concise puller
– Chases plays downfield
– Held his own against Jarran Reed of Alabama in the run game

– Lacks pop, shoulders square facing LBs
– Watches the QB through his legs, can’t give that away at the next level
– Needs better hand placement pass-blocking
– Doesn’t keep his head on a swivel, has to find someone to block. Needs to keep his eyes up and see himself into blocks
– Will allow rushers to escape too easily even if he’s already won the block
– Doesn’t have the hip flexibility to adjust to multiple rushers in his face, needs to turn his head and disengage to pick up twists
– Ungainly backpedal (more of a waddle)
– Struggles to double-and-release, better working to the second level by design

For how often they’re asked to do it (hint: not much), it’s always somewhat surprising to see a center able to pull and get out in space. Matthews keeps his footwork firm here and gets into the hole well, where he knocks a LB down and hustles downfield. For a C not often asked to play in space as such, this is a very impressive play.

For an undersized guy, Matthews has his moments of flashing adequate play strength. Matched head-up on Jarran Reed, Matthews fires his hands and locks his elbows. He thrusts up just enough to rock Reed back for half a step. That’s all that’s needed to create the hole.

However, there’s no getting around the fact that Matthews is undersized, and that flashes through more often than not in the amount of power he’s able to generate. Here, he gets to the second level against a linebacker, but doesn’t keep his shoulders level. Instead, the LB gives him a good shot and knocks him off balance.

That shows up again later in the same game.

Matthews just gets rocked by the late blitzer and fails to anchor. Gotta keep that front of the pocket firm.

Matthews often struggles with his pad level. He lunges here with his head down and his pads low, and A’Shawn Robinson makes him pay with a quick swim move. Lunging can be very dangerous for an offensive lineman they lose sight of their man, and here Robinson’s athletic ability wins the battle. Matthews needs to square to the defender and keep his head up.

If you’re even remotely familiar with NFL offensive line play, then you’ve undoubtedly heard of Bruce Matthews. Just two short years ago, brother Jake kept the family name proud by being selected 6th overall by the Atlanta Falcons in the NFL Draft. However, Mike Matthews isn’t the player that either of them are, and the only reason he may make a training camp roster could be the name on the back of his jersey.

As a player, Matthews is undersized and short, and while he occasionally shows some movement skills that would use that to his advantage, a combination of inconsistency and scheming didn’t always bring that out. Matthews is at his best pulling, unusual for a center, but uses his footwork to the best of his abilities. He is able to move tightly around the line and clean into space. However, he can’t move linemen one-on-one in the run game and struggles to anchor when facing pass rush.

Matthews can be effective double-teaming in both cases, but lacks the mental processing speed to know when to release and get to the second level. And against larger nose tackles (with the surprising exception of the Tide’s Reed), he gets washed out against the run. With the continuing spread of odd-man fronts in the NFL, the center has to be able to handle the nose tackle mano-à-mano, a consistent struggle for Matthews.

He may have some athletic traits that coaches will want to work with, but Matthews’ stiff hips and slow head will also limit him at the next level. His drive and competitive spirit (running down plays, talking assignments with other OL after the play) will make him a fiery part of any OL, but the ability just isn’t there right now.