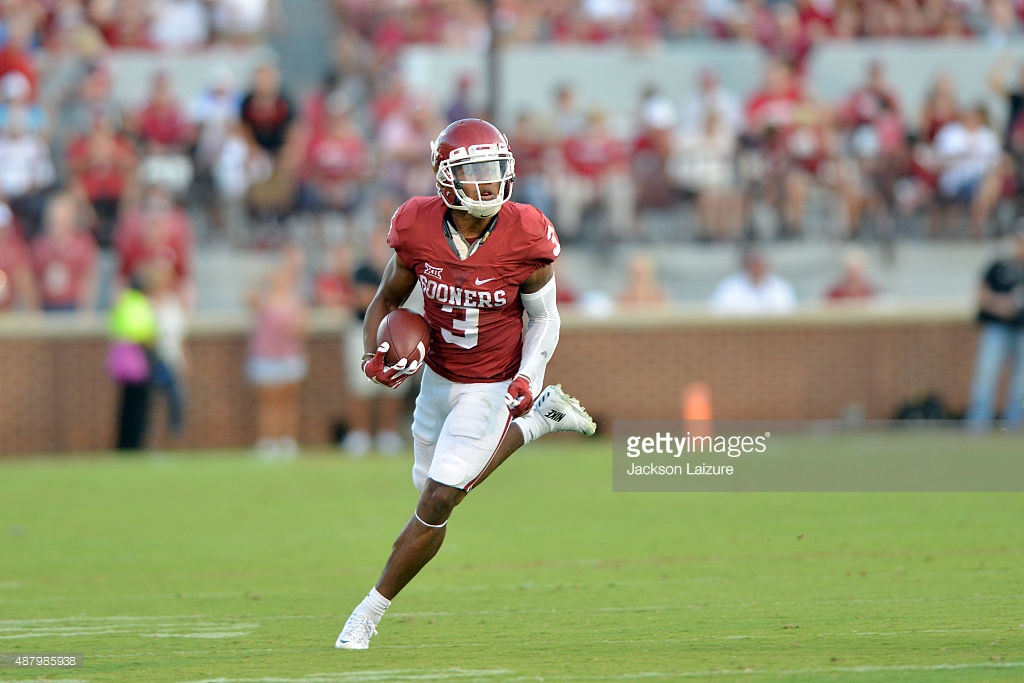 – Needs to respect red line on the sideline, keep himself in-bounds for his QB
– Takes a “giddy-up” step releasing from the line against off-man
– Lets too many easy passes go through his hands
– Sometimes needs to quit the fancy footwork and just get off the line
– Struggles tracking the ball at times
– Could be a more active handfighter

The quintessential Shepard rep here. On a third and short, let him clean up off the line with a hard outside release selling the vertical route and getting the corner to flip his hips. Then, he comes back inside on what is now clearly a three-step slant. He gets his shoulders around and his hands up for the quarterback while the safety starts bearing down. Adjust to a ball placed behind and get his head up for the hit. He takes some punishment to the midsection for the catch, but that doesn’t even affect him.

This is just beautiful. Down a touchdown with :45 left in a must-win Top 25 road game, Shepard makes it happen.

Although most of the fade route isn’t displayed on any of the television angles, the catch itself is. Shepard puts his vertical to good use and pulls the ball down over the cornerback, somehow getting both feet down in bounds plus his backside to boot for the game-tying score. What could be better than that?

How about the eventual game-winner?

In double-overtime, the game tied, a 3rd and 3. Shepard is on the line, so he can expect to be pressed. His footwork is good enough to get him about a yard downfield before the corner makes contact. I’ve seen a lot of knocks on Shepard for his play strength not being up to par with his gym strength, but that definitely wasn’t the case here. His straight-arm on the corner knocks him over and leaves him alone in the open field. He makes the catch at the first down marker and gets production after the catch with a very nice stop-and-go. Tiptoe the sideline and score. Sounds easy, right? Well, Shepard certainly makes it look easy.

All manner of routes look too easy for Shepard. He has the cornerback beat off the line with his jab step outside, but he rocks back that way with a quick whip route. The throw is too far high and away, but the footwork to get off the line against the press is just ridiculous.

A simple outside release and sideline go route for Shepard, but look at him tracking the ball, something he had difficulty with at times. He comes back and gets it off his back shoulder with both feet in bounds. This is a great partnership at play between him and Baker Mayfield, where Mayfield trusts to put the ball there and Shepard goes and gets it.

As a player, Shepard gives his all on every play. Matched up here against Tennessee LB Cortez McDowell, Shepard is down about two inches and over 45 pounds. That doesn’t intimidate him or slow him down one bit. He runs right into McDowell and engages well. Compare his block to that of WR #1 Jarvis Baxter at the bottom of the screen. Shepard engages with body and both hands, compared to Baxter’s extended left arm. This kind of will to block is rare, particularly from a smaller receiver, and I tend to give it high marks when it pops up on tape.

Although Shepard was the fourth-shortest wide receiver at the NFL Combine, the rest of his measureables among the wide receivers speak for themselves. A 4.48 40 yard dash (T-9th best). A 1.55 10-yard split (T-3rd best). A 41″ vertical jump (T-1st). Despite pedestrian times in the 3-cone and short shuttle, he still put up 20 bench reps, for crying out loud.

Shepard might be the fastest WR in the draft in the first ten yards with pads on and certainly one of the more polished route runners. Yet, that size is going to hold him back in the draft because teams are going to see a small speedster who can’t get off the line against bigger, stronger bodies. That couldn’t be farther from the truth.

The trend is, smaller wide receivers with short-area quickness and excellent footwork can beat press coverage just as easily as the larger ones who do it with play strength. Look at Emmanuel Sanders, or Tyler Lockett last season in his rookie campaign. Shepard is in the same mold of quality as a receiver as those two when it comes to footwork and route-running ability. Quickness kills.

Shepard has also displayed blocking ability and willingness to go over the middle, but I do have some concerns about his hands. He was credited with just 8 drops in 253 receptions per NFL.com, but he missed a couple of gimme catches in the games I watched of his. They seemed to just be lapses of concentration, which leads me to imagine that will be easily remedied.

The bottom line is, Shepard is a far more talented WR than he’s getting credit for right now, and in the right system he’ll shine. I don’t think his size necessarily limits him full-time to the slot in the NFL simply thanks to that ability to succeed in the short area and inside ten yards, but he will have some work to do on his get-off at times. He should be a top 50 pick, particularly considering his return upside.