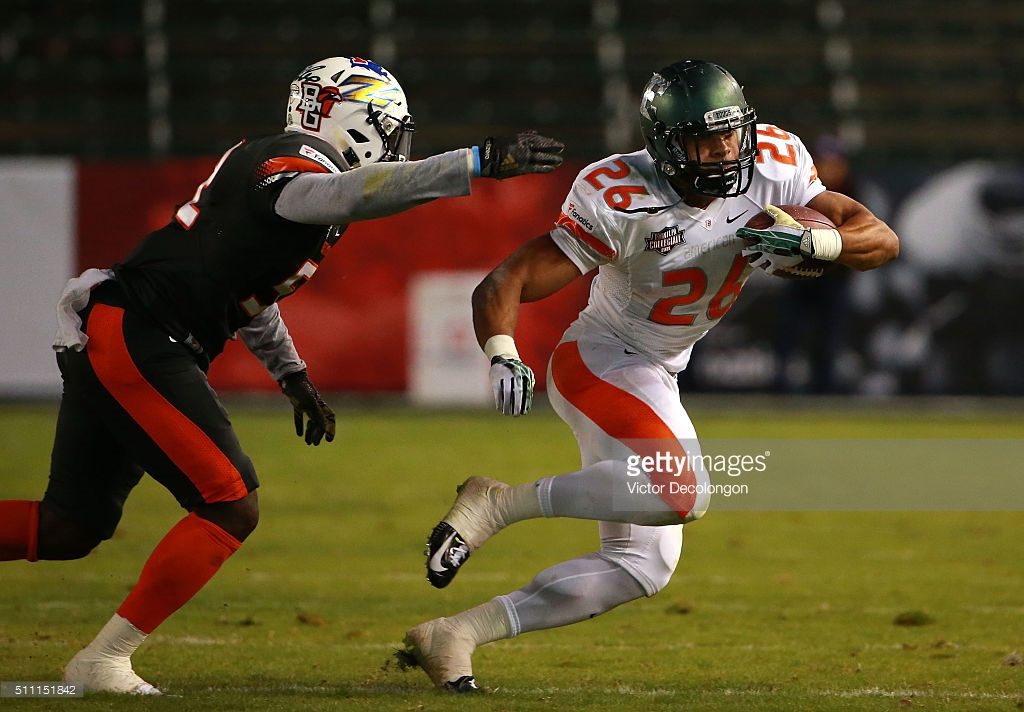 Breakdown of someone the team has brought in. Akron’s Jatavis Brown.

I just want to admit up front just how much of a believer I am in Akron’s Jatavis Brown.

As film evaluators (notice I don’t use “scout” because I don’t profess to be one), Brown just consistently makes plays and has you rooting for him more often than not.

Despite standing just 5-feet-11, Brown is a ball of energy that constantly flies around all over the field making plays as evidenced by his impressive stat line while at Akron.

Although he might not have a true fit at the next level in terms of positioning, he’s a high-end athlete that deserves to see the field regardless of size.

While playing linebacker at Akron, Brown spent a lot of time around the line of scrimmage — often times making play after play behind the line while leading a stout Zips defense week after week.

Despite having short arms and dealing with a height disadvantage, Brown was able to use his speed and explosiveness to blow by blockers to make plays consistently.

While that’s not the best tackle he could possibly make, you see the athleticism and explosion to get to the ball quickly to make the play.

Despite biting on the play-action to the right, Brown is able to change his direction quickly before then dipping around a would-be blocker, giving him a free lane to the ball carrier.

The tackling can be worked on, but you can’t teach that athleticism and explosion at the linebacker position.

One thing that really stands out to me with Brown is his willingness to hit people with force, setting the tone for the rest of the defense.

He might not look like it due to his size, but Brown is a violent hitter that can blow you up in a hurry if you aren’t ready for it.

That’s recognizing the run quickly, allowing him to fly forward to stun the pulling lineman before then making the play behind the line.

Notice that he doesn’t take a false step either before transferring his weight forward at full speed to blow through the line.

He made a habit of blowing past linemen during his time at Akron.

Look at the way he’s able to explode through the line to make the play almost at the same time as the handoff.

Granted, Brown was able to time out the blitz perfectly, but his explosiveness for the position is very rare, which has him generating a lot of buzz leading up to the draft.

Although he might not have a defined position, if he can make plays like this on a regular basis during his time in the NFL, he’ll have a nice, long career under a defensive coordinator that should have quite a blast deploying him all over the field as a defensive weapon.

When he’s in the box he’s a very hard player to block due to his awareness, recognition skills and athleticism, making it hard for linemen to get a clean read on him in the second level.

On top of that, Brown is able to sift through the garbage in front of him to make the play.

The Pitt tackle tries to get to Brown at the second level, but he’s already on the move at the snap, flowing to his right to try and cut off the play.

While in the process of flowing, Brown is able to avoid a buildup of bodies before ultimately making the play for a short gain.

With his small frame he’s able to dip around blocks with ease, avoiding the massive linemen in front of him more often than not to make the play.

This play is similar to the clip earlier against Penn State, but I think this clip against Pitt shows more of Brown’s athleticism and explosiveness when closing in on the ball carrier.

By timing out the blitz, Brown already puts himself at an advantage with his speed coming forward against linemen trying to get out of their stances.

Passing the line, Brown has to react quickly to moving parts in the backfield to find the football. With his quick procession skills, Brown is able to zero in on the quarterback to make the play while forcing the fumble in the process.

As you can see, Brown is a solid player around the line of scrimmage, but his true test on where he fits in the NFL will come in coverage.

Some see him as an in-the-box safety, while others believe he can still produce as a linebacker.

For me, I think he’s more of an in-the-box safety who can offer above-average run support, serve as an effective blitzer and even cover tight ends and running backs when asked to.

This is a simple play for Brown, but it shows the fluid hips, quick feet and quick-twitch athleticism to make the play on the out route.

At the snap, Brown showcases a solid back pedal that is low and quick. Once the ball is thrown, Brown plants and explodes towards the ball with an impressive transfer of weight.

While it’s a play most linebackers should make in coverage, it’s more than just about the play made.

I really like the feet, balance of weight in his back pedal and his explosion towards the ball.

He could be a solid coverage player in the intermediate area of the field.

One area I am concerned with is his press skills and then his ability to drop correctly into a zone while reading the QBs eyes.

On this play Brown does a good job of bumping the receiver off of his route slightly, but where he fails is with the drop into his zone. It’s not as deep as it should be, and he needs to work more towards the middle of the field, making that throw harder while allowing himself to possibly make a play on the football.

That will come with more experience and more coaching at the next level, regardless of what position his next team deploys him at.

Akron head coach Terry Bowden said that Brown is “highly motivated, and very driven,” so I see no reason as to why Brown can’t make it work at the next level.

Overall, I see Brown serving as a playmaker as an in-the-box safety that can blitz off the edge, chip in with support against the run and serve as an adequate defender in cover in the short-to-intermediate areas of the field.

Whomever drafts him better have set plan has to how to use him. He’s too good of an athlete to go to waste at a position where he can’t excel.