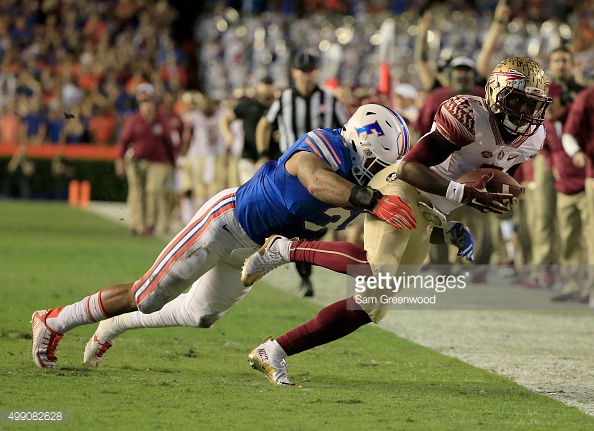 -Has some injury red flags with knee injuries/surgeries
-Short arms for a linebacker hurt his tackle radius
-Lacks above-average play strength to hold up with playing style
-Struggles to get off of blocks quickly; can be walked backwards
-Lacks patience and struggles to read and react

If you love linebackers that play with a high level of swagger and run around making plays like their hair is on fire, Antonio Morrison is a linebacker that should fall right into your line of sights.

As the leader in the middle of the Florida defense over the last three years, Morrison put up some impressive stats while flipping in between a 3-4 defense and a 4-3 defense under four different defensive coordinators at UF during his four seasons on campus.

With his frame, Morrison is outstanding against the run, using his good balance and burst — along with his athleticism — to get around blocks to make plays in the backfield.

Against Ole Miss this past season, Morrison simply dominated the game. He was all over the place making play after play against an explosive offense, showcasing his speed and high motor to make plays not only against the run, but in coverage as well.

In the first clip, Morrison shows the ability to work through traffic, avoid an oncoming blocker and still have the burst and explosiveness to make the play at the line of scrimmage.

When he’s able to avoid blockers, Morrison is able to make tons of plays, but when the big uglies get their big mitts on him, he’s done. He doesn’t have the strength or the reach to get guys off of him against the run, which could hurt him at the next level.

In the second clip, Morrison shows his explosiveness coming downhill against the run, knifing through the Rebels’ offensive line to make the play in the backfield.

Although he tends to struggle at diagnosing plays, that’s just not the case on this play. He reads his keys well, times the blitz perfectly and darts into the backfield to make the tackle for loss.

It’s very clear immediately on tape just how violent and explosive Morrison is against the run, which is very intriguing.

Not only is he good at flying downhill against the run, Morrison routinely shows the ability to cover sideline to sideline on runs, as well as on swing passes.

Against Kentucky in 2014, Morrison played mainly in a 4-3 MIKE role, allowing him to roam around making plays, whether that was in coverage against slot receivers and running backs, or coming quickly downhill to thwart runs off tackle.

In the first clip above, Morrison recognizes the quick throw to his right. Although his running technique is a bit unorthodox, Morrison covers a lot of ground quickly, allowing him to close in on the ball carrier to combine with teammates to make the play.

A similar thing happens in the second clip against East Carolina.

As Morrison shadows the running back out of the backfield, he shows the burst and explosiveness downhill to close quickly on the throw before then forcing the fumble.

That’s what I love about his game. He’s quick in space, covers a lot of ground and has a nose for the football, bringing all of his weight behind him on tackles to leave a mark.

Showing his versatility again, Morrison is assigned coverage in the slot on the Kentucky receiver. Although he’s a bit grabby in this clip, he shows his fluid hips and athleticism in space, turning and running with the slot receiver down the field.

While he looks good in this clip, it’s not something that should be asked of him on a regular basis as he doesn’t have great long speed to do this consistently at the next level.

Wrapping things up, one are that Morrison could get himself into trouble with is his aggressiveness.

Yes, it’s a key strength of his because he plays like an old-school linebacker in terms of the punishment he doles out, but it can also hurt him.

On this clip, Morrison reacts quickly to the short throw against East Carolina, but he takes a poor route looking to lay a big hit, allowing the receiver to make a subtle move back to the outside, leaving Morrison flat-footed in space.

When he’s overaggressive he can really run himself out of plays, leading to big plays for his opponent.

With the right coaching at the next level that could be reigned in but you don’t want to harness what makes him special.

Overall, Morrison is a slightly undersized middle linebacker who could be an ideal 4-3 WILL or a 3-4 JACK where he would be protected to roam and make plays. He certainly has the tools and the makeup to be a great pro, but medical concerns and some physical limitations could hold him back.