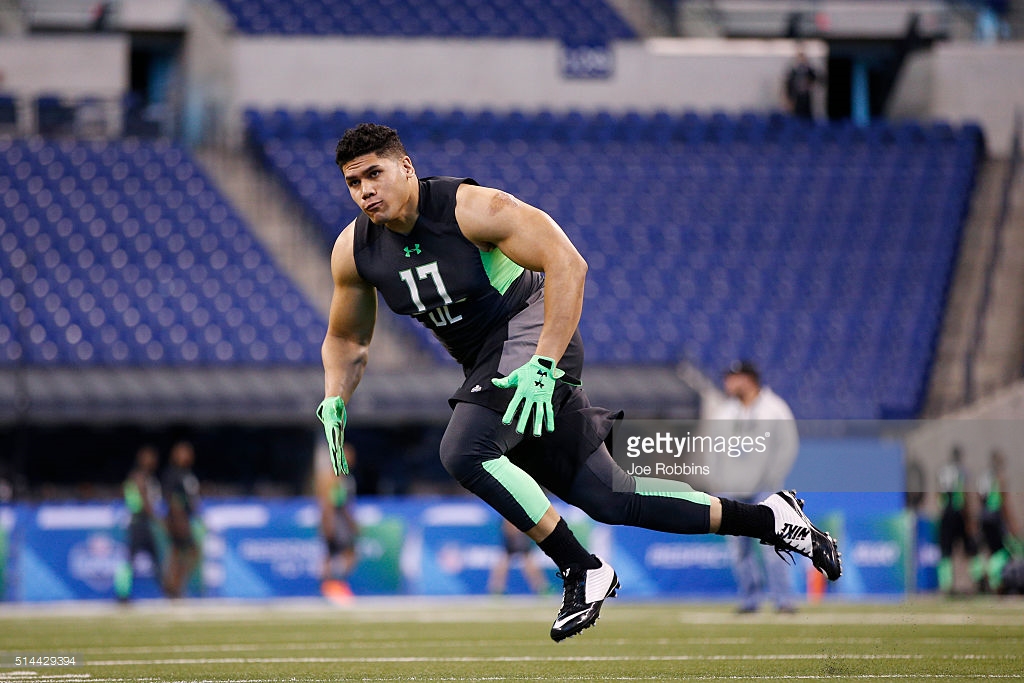 – Effective at weaving through traffic
– Has used 3 and 2 point stance
– Understands hip discipline and contain
– Smart player: senses screen coming, will get hands up on quick passes
– High-motor, will chase plays down
– Solid spin move, can generate movement with swim
– Can twist, dangerous coming free up the middle on designed stunts

– Lacks burst and get-off
– Confused by pulling linemen coming across his face
– Not athletic, but not overly stiff
– Ungainly backpedal, awkward in coverage
– Lacks bend
– Caught consistently out of place as a spy

Although Fanaika isn’t any great shakes athletically, he does have very sound technique against the run. He keeps his hips parallel to the line and shuffles sideways towards the ball carrier, great technique to cut off the edge. Then, he closes for the tackle even though he only gets an ankle. You’d definitely like to see him make this stop, but the technique to ensure the run gets funneled back inside is excellent.

Again, although Fanaika may not be an entirely athletic specimen, he gets to the QB as well with guess what? ….with technique and with motor. I practically threw out most of his matchup against Stephane Nembot considering Nembot is horrific, and his pass set here is no different. Nembot may be leaning and not set here, but look at Fanaika. He gets his hands placed and bulls Nembot backwards, barely even having to shed to take a shot at the QB. If we ignore the awful OL technique, it’s worth noticing that Fanaika just keeps harrying him without allowing him a moment to pause and re-set.

Fanaika keeps his outside shoulder free and peeks over the tackle’s shoulder to keep his eyes in the backfield. Then he presses and sheds for the stop. I really like how he keeps his vision in the backfield and doesn’t get distracted by the blocker on this rep.

Fanaika is split ridiculously far outside here. Forget wide-9, this is practically a Wide-11. He has to clear the wingback, the extra space and then finally get to the LT. However, as the lineman anchors, Fanaika lowers his head and bullrushes him, eventually getting a hand on the ball to cause the incompletion. High-motor intensity and excellent play strength are what made this play work.

Although Fanaika looks great using his motor to his advantage to get to the QB, in space he is shown up for being unathletic. All he has here is a simple zone drop, but basically walks backwards, eschewing any kind of backpedal. His lateral stiffness popped up time and again on tape, which could be problematic at the next level.

Like his Ute teammate Gionni Paul (profiled here), Fanaika is somewhat without a position at the next level. He has the skillset to play base-down DE in a 4-3, and the motor to be successful at pushing the pocket on passing downs (although he’ll never be a 10-sack guy). However, his size is an issue – he’s squat at just 6017 and 271. In that regard, he compares similarly to Steelers selection Anthony Chickillo.

Fanaika has shown he can play from a two-point stance and hold the edge, but I still question his dropping abilities. In that sense, if he could lose a little weight, he would be serviceable as an outside linebacker if not asked to drop often. He’d be more of a tweener there than at end, but that would at least fit his body type if not his skillset.

Fanaika has the production and the skillset, but it’s the frame that’s the issue to me. His age (24-year-old rookie) doesn’t give me cause for comfort, either. I think a team will take a swing on him late Day 3, but he’s near his athletic cap as is. Definitely a “what you see is what you get” type.