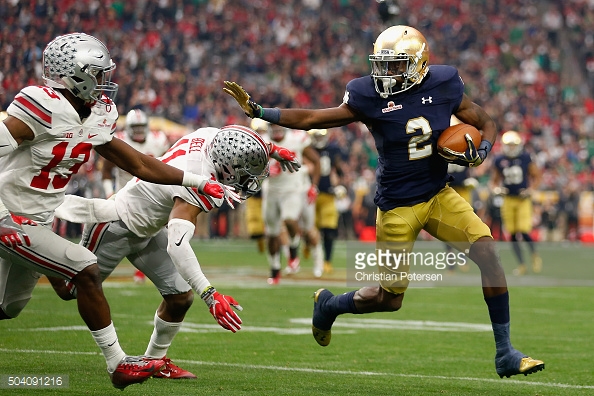 -Solid route runner that knows how to work open
-Quick in and out of breaks to create separation
-Knows where to settle against zone coverage to show his numbers
-Steady, consistent option for offense
-High points football well and is a serious vertical threat
-Good height/length combination for position
-Willing blocker who works hard

Notre Dame was quite lucky to have a ton of burners at wide receiver over the last few years, most notably Will Fuller and Chris Brown.

Despite playing in the shadow of Fuller for the past three seasons, Brown was a steady receiver who used his speed and crisp route running to get open all over the field for Irish quarterbacks to find him.

Coming to Notre Dame as a standout football and track star in South Carolina, the 6-foot-2 receiver spurned his hometown Gamecocks for the chance to put on the golden dome of Notre Dame. Fortunately for him, it paid off.

Although Brown never put up eye-popping numbers for the Fighting Irish like Fuller did, the senior receiver was the definition of consistency throughout his time at Notre Dame.

With his 4.47 speed, Brown was able to consistently work open all over the field, providing his quarterbacks with a security blanket that was decisive in the open field and routinely moved the chains.

Brown has great footwork as a receiver along the sidelines and really sells himself vertically, forcing defenders to bail a little early due to his long speed, which allowed him to work back to the ball on hitch routes.

But where the Notre Dame receiver really excelled was on crossing routes working over the middle where his quarterback could hit him in stride, allowing him to use his speed in the open field.

Although this throw is slightly high and just a bit off target by Everett Golson, Brown does an excellent job of extending to make the play.

Much like Rutgers’ Leonte Carroo, Brown has a knack for recognizing how defenses are playing him on crossing routes, allowing him to go deeper on the play, or cut the route off — in terms of depth — to make sure he makes the play.

You can see that here with Brown. He does a good job of working across the middle quickly, allowing himself to see he has some room over the top to get a little bit deeper in his route, giving the Fighting Irish a few extra yards on the reception.

Should this be a good throw, there’s a good chance Brown scores on the play.

Fortunately on this play, Malik Zaire hits Brown in stride across the middle, allowing him to waltz into the end zone for an easy touchdown.

This play right here is a great summation of what Brown can do for a team at the next level.

Despite being 6-foot-2, Brown has the appearance and skillset of a slot receiver who can use his speed and shifty route running to create havoc across the middle of the field.

Although this was an easy touchdown, you can see how he gets lost in the middle of the field and then has the speed to run away from teams once he catches the ball.

Working across the middle again, Brown gets a free release with the cornerback playing off the ball. That’s a problem.

As Brown works across the middle of the field, you see a subtle jab step with his left foot to flatten out his route, getting back underneath Texas’ No. 14, where he then goes up and high points the football for a terrific catch in traffic.
While he’s a guy who tends to get alligator arms when he knows contact is coming, this was an impressive display of athleticism and the want-to to go up and get the ball.

His QB sort of hung him out to dry in this instance, but he made the play and displayed good, strong hands at the catch point.

Doing work against Texas again, Brown gets another easy touchdown, but I’m not entirely sure his quick release, quick feet and speed to the inside didn’t force the Texas cornerback to fall all over himself.

This is a simple RPO by Notre Dame designed to get Brown on the post. It works to perfection, and really, Brown runs a great route regardless of the cornerback falling.

His footwork is perfect and his cuts are good, allowing him to get into the middle of the field quickly.

The play that really stood out to me with Brown was this tremendous catch against Boston College in the Shamrock Series game at Fenway Park.

He is so quick and decisive in and out of his cuts, allowing him to turn defenders around. However, the Boston College corner stays right with him, forcing him towards the sidelines.

Brown, who has great footwork near the boundary, simply goes up and rips the football away from the Eagles’ defender for the impressive touchdown.

Being a jumper, Brown can really go up and get the football in the air. He has good hands to make plays like this, and I really like the quick, hard cut at the beginning of his route to get vertical.

But, with that being said about Brown, there are also plenty of concerns.

How does he hold up at the next level throughout a full season with such a thin frame? That’s the same question I asked about his Fuller, and it’s warranted.

Brown did add some weight before going to the combine, but was it enough? Time will tell.

Will he learn to get rid of the reliance on body catches (which lead to bad drops) and focus on his good foundation with his hands?

The right coaching at the next level should cut out the bad habit of trapping the ball against his body. Once he does that he could put up some better numbers.

Will he become more physical and not get knocked off of his routes against physical corners? How will he hand press coverage at the next level?

Overall, Brown will need to continue to hit the weights and seriously focus on his release at the line against physical corners. He’s no good to an offense if he can’t get off the line quickly.

As a draft prospect, Brown is likely a priority free agent at this point. Despite being a track star, he has no return experience, which could hinder his ability to stick on a roster while he continues to learn the nuances of the position.

If he shows he can handle return duties and make the occasional splash plays after the catch, Brown should have a decent career at the next level.