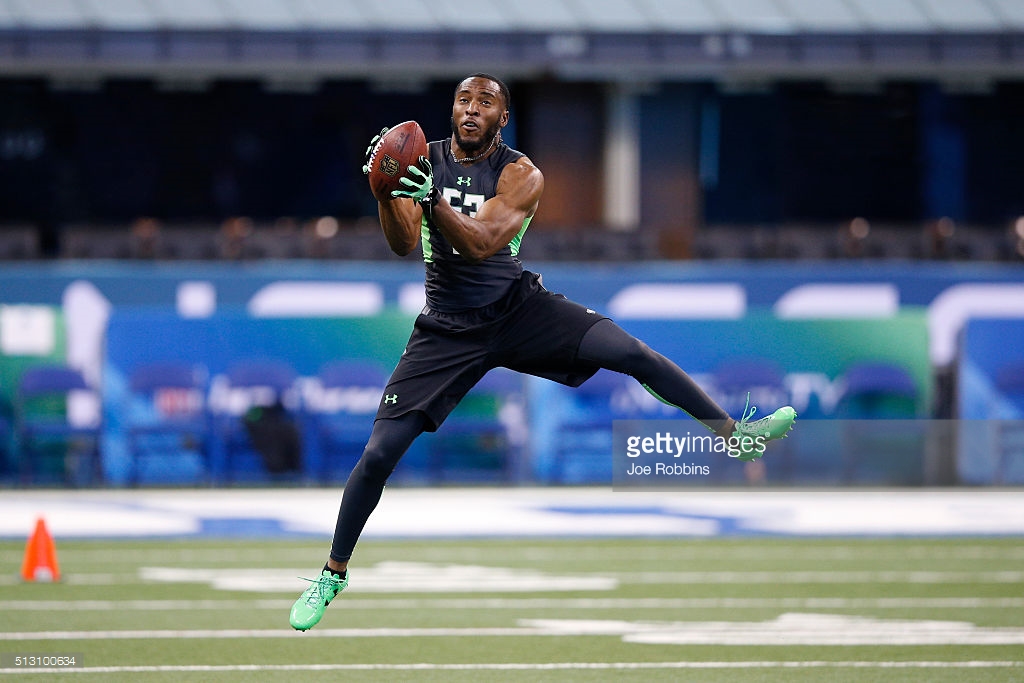 -Thin, wiry frame that holds him back from being violent tackler
-Slow to read and react to what’s happening in front of him
-Motor runs hot and cold; takes some plays off
-Labors to change directions in coverage
-Doesn’t have much of a recovery burst
-Lost playing time to an underclassmen as a senior

-Attended East Mississippi Community College where he helped win a JUCO national title in 2013
-Nephew of former Atlanta Falcons running back Sylvester Stamps
-Hauled in five career interceptions over two seasons at Kentucky
-Recorded a 4.65 40 and a 33-inch vertical

If AJ Stamps were building an NFL resume off of film, he could have stopped at 2014 tape and made quite a case for himself as a top safety. However, 2015 happened for Stamps, and I’m sure he wishes he could have a re-do.

The difference between ’14 Stamps and ’15 Stamps is night and day. In 2014, Stamps looked like a rangy, physical, ball-hawking safety who could play in the slot or as a single-high centerfield-style safety, but something went wrong leading into ’15, which in turn really hampered his status as a safety prospect in this class.

What really hurts Stamps is his lack of physicality, which is a must-have as a safety in today’s game. It doesn’t matter how many great plays you make on the ball, if you’re not willing to tackle and sometimes make business decisions over the good of the team, you’re showing scouts that you just don’t have what it takes.

That’s kind of who Stamps reminds me of as I finish up his film evaluation.

The interceptions look great; as do the occasional big hits, but the missed tackles, lack of physicality and want-to at times really hurts Stamps’ status with me.

We’ll start with the ’14 tape first, because I do think that version of Stamps is still in the current version somewhere; it’s just up to him to bring that version back out.

In 2014, Stamps was a very physical safety that would fly down from his safety position to make some big hits.

The clip above shows his ability to read what is happening and then close ground quickly to make the play.

Looks great, right? As I was going through the film I thought if this is the full version of Stamps then I just don’t see how some have him in the low 40s among defensive backs in this class.

Stamps continued to amaze throughout his ’14 tape.

That’s a one-handed interception as a centerfield safety, allowing him to read the QBs eyes and make a break on the ball. The obvious ball skills are there thanks to his wide receiver background.

When he’s in the centerfield role he does a nice job of watching where the QB is looking before then breaking on that area to try and make a play on the ball.

Same thing happens here. He’s patient and reads where the QB is looking before breaking over the top to jump the route and return the pick for a nice gain.

During the ’14 season Stamps was constantly around the ball, often getting his hands on the football to break up passes, as evidenced by his 18 career pass deflections.

The ability to serve as a centerfield safety is certainly there. He’s a guy who reads the QBs eyes well and has good route recognition, allowing him to break on balls quickly.

Again, he can be an aggressive safety coming forward against the run. Although he certainly loses this one-on-one battle with the South Carolina running back, it’s very telling that he’s willing to lower his shoulder along the sidelines to force the running back out of bounds, regardless of taking a big shot or not.

This play went over well with his teammates, who certainly looked up to him on the field throughout his time as a Wildcat.

But for every time he was aggressive coming forward as a safety to make a play, he followed that up by running himself out of position, allowing a big play for the other team.

In the first clip, Stamps does a nice job of reading run quickly, but by running himself into the crowd of linemen and defenders downfield, Stamps allows an easy lane to form off to his right, allowing the UT Martin running back to burst through it for a big gain. If he stays patient here he might limit it to an 8-9 yard gain instead of 15+ yards.

Stamps does a good job of initially filling the lane on the run, but by venturing towards the sideline ever so slightly, Stamps allows the Gamecocks’ offensive lineman to seal him off to the boundary, giving Mike Davis a huge lane to burst through for the big gain.

Outside of taking himself out of plays, Stamps really struggled in coverage down the stretch.

Gone were the days of the ball-hawking safety who routinely got his hands on footballs. In stepped a guy who had clunky footwork and looked lost at times.

Keep in mind that the clip above is against a tight end who should have been an easy assignment for a guy like Stamps.

Alas, the footwork is awful and Stamps gives up the inside to the Florida tight end, allowing an easy first down in the red zone.

This simply can’t happen with a safety on a linebacker, especially in the middle of the field.

I really don’t know for sure what coverage Stamps was in on the play, but the fact that he broke hard to the outside is strange. That allowed the tight end to run free down the seam.

That has to be cleaned up at the next level.

Overall, Stamps went from a guy in 2014 who looked like a surefire mid-round pick to a guy who is unlikely to hear his name called on draft day.

Is he a safety or cornerback at the next level? That will be interesting to see where he fits in at with whatever team decides to give him a shot.

Personally, I see him as a centerfield safety who can cover sideline to sideline, but that aggressiveness as a tackler has to come back. If it doesn’t Stamps could see himself out of the NFL quickly, considering he doesn’t have one standout trait.