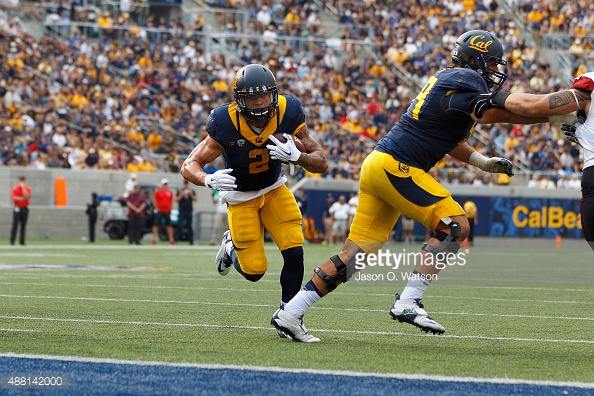 – Needs to keep ball in outside hand
– Has difficulty picking up blitz protection schemes (takes incorrect steps), and Cal doesn’t run many pro concepts
– Too often uninvolved in blitz pickup
– Can be too complacent and patient waiting for blocks to arrive
– Vision isn’t always complete, will miss lurking defenders

The way Lasco maneuvers in the backfield is quite impressive. Here, he has to step forward initially for the pulling guard to kick out the blitzing safety. But, he can’t continue on that forward path, because it’s going to lead him right into the line. Instead, he jump cuts outside, and bends the line headed upfield. How else would he finish this play if not with an attempted hurdle?

Really interesting blocking here for Cal. They pull the left guard and he ultimately kicks out the left side EDGE player for the Aztecs. The right tackle and tight end wash down the line, leaving a gaping hole for Lasco. Again, he refuses to go down on first contact and explodes into open space. He keeps his balance and his feet churning for a large gain on 1st and 10. You don’t need a home run back if you have a guy who can pop out 15-yard carries every other drive.

Lasco just follows the pulling guard to daylight here. He makes a nice, tidy shift in the open field, causing a missed tackle in a phone booth. I also really like his patient running downfield to set up the open-field block.

Lasco has almost a sixth sense for blocking and box presence. He is able to make himself skinny through the line here, and explodes to the second level. From there, he plows through a whole mob of San Diego State defenders for the first down. Excellent running and gaining ground.

One area where Lasco has a lot of development left is his pass blocking. Cal doesn’t have any particularly advanced blocking scheme when it comes to protecting the QB. They’re just a pretty straightforward Air Raid offense when it comes to that, and yet Lasco struggled at times with recognition protection and slide calls. More immediately apparent, however, was his blocking itself. He engages well with the Oregon defender here, content to push him towards the end zone. However, when the Duck tries to re-set towards the line of scrimmage, Lasco is caught out of place. He’s stiff moving laterally here trying to pick this up and ultimately his man makes the tackle.

I understand that Lasco has some injury concerns, but I am honestly surprised there isn’t more chatter about him. He does almost everything you’d want an incoming rookie running back o be able to do with the ball in his hands. Is his vision perfect? No, not yet, but there’s room to develop. Is he likely to see much third down action? Well, he can catch the ball but struggles pass-blocking.

Apart from that, Lasco is a surprisingly pro-ready running back prospect. He’s explosive and freakishly athletic, with a particularly standout combine. You can’t bring him down on first contact as he’s either too elusive (be it open space/a phone booth) or a bully when defenders attempt a tackle. His footwork is great, with the ability to gain ground and yet throttle back to hit the hole.

I do wonder how Lasco’s minor vision issues will translate to the next issue when he’ll likely be running from behind center instead of off-set shotgun. But apart from that, he’s a very athletic running back prospect with comparatively little tread on the tires, and enough versatility to get by in zone or man blocking schemes.