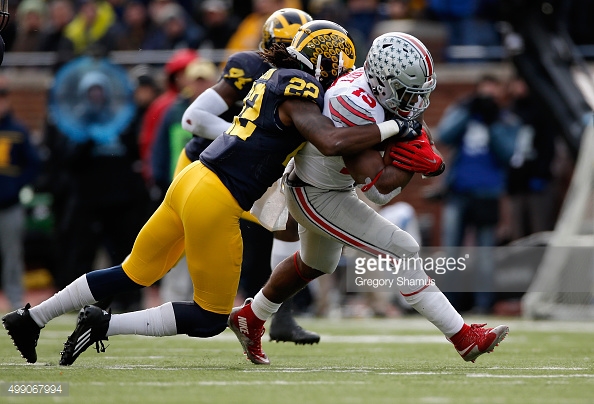 Look at someone the Steelers have brought in. Safety Jarrod Wilson.

– Has experience playing over slot, boundary corner
– Not afraid to step up against run
– Patient in contain
– Puts helmet on ball when tackling, causes turnovers
– Disruptive downhill blitzer, gets hands up to bat down balls
– Impressive bend to defeat blockers

– Will take poor angles against the run
– Slow laterally, lacks range deep
– Can be just too complacent in waiting for plays to develop
– Difficulties staying deep in two-high, plays too far back in single-high
– Limited explosion out of break
– Questionable play vision, will run himself out of plays

Wilson isn’t afraid to come in and deliver some shots. He initially starts off-screen here, but steps in and helps stand the RB up. At free safety, this is the kind of run support you want to see from a two-high shell. Patient until he gets a clear shot, then he makes the tackle.

Wilson, lined up at weakside free safety, can be one to make his presence known. Comes down, squares, takes a moment, then throws a shoulder. Getting involved in a play like this, this far downfield is rare for a safety, and I like the aggression.

The strong safety, Wilson moves across the formation with the tight end in motion. He’s mystifyingly slow in trailing the back into open space, allowing Jeremy Langford to burst free. From there, he looks labored in changing direction to make the tackle. You can afford to be this patient from FS, but not at SS, who need to play with more urgency against the run.

Wilson has some serious spacing issues, as you can just catch him rolling at the start of this. On a 2nd and 7 at the Michigan State 27, he comes out of his backpedal at around the Michigan 45. There’s no reason he should be pedaling about 28 yards deep, especially when Connor Cook barely took any drop from shotgun. As such, he’s nowhere to be found on a pass that a FS with any semblance of range would have made a play on.

Cook doesn’t have a cannon. He’s not going to beat you deep with it whatsoever, and considering the early down nature, there’s no sense in trying to prevent a deep shot here. I mean, he’s still going backwards when Cook cocks his arm, which is an automatic cue to close.

I also have concerns about his angles from free safety. Initially he just comes straight downhill at this Zeke Elliott run, but he realizes too late that Elliott is hitting far outside of where he was aiming. On his initial angle adjustment, he again commits too far inside and once again has to re-set on the fly. From there, he actually keeps pace with and ultimately runs down Elliott downfield, which is impressive. But at free safety, he has to be far more disciplined than that initially.

My first instinct was to say Wilson was patient in single-high, but I realized that is problematic. He’s just out of place or position far too often for it to be just a patience issue. Instead, I see it as more of a processing/play recognition problem. For someone with as much starting experience as Wilson, there are far too many questionable plays and decisions for me. The poor tackling angles and spacing/backpedal issues are pretty significant (not to mention very limited range), and they remove him as a free safety prospect, in all honesty.

These are mistakes that he should not be making in his third season as a starter. He should either have recognized this personally by now (making it a football IQ issue) or been coached out of it (meaning he might be somewhat uncoachable). Either way, I don’t particularly like the alternatives.

That will limit him to NFL roles as either a strong safety or a matchup safety. I don’t think he processes quickly enough to survive long-term in the box, nor are his mental processing and vision fast enough to react quickly to what’s in front of him. Strong safety is certainly not a position he’s extremely familiar with, as he saw most of his time deep. He also doesn’t have the top-end speed or body athleticism for a conversion to corner, nor the true tackling ability to stick in the slot.

While his size may earn him a draft selection, Wilson just isn’t put together fully on the field yet. His best NFL shot is at strong safety, but he will need a few seasons there developing and learning the position. Probably a practice-squad bound player for the time being.