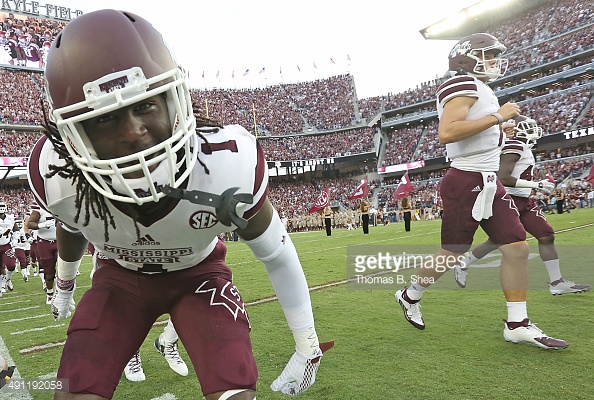 -Great play strength for position; rarely gets bumped off routes
-Outstanding catch radius with 33 7/8 inch arms
-Consistent chain-mover
-Boxes out defenders to shield them away from the ball
-Physical run blocker that has a bit of a mean streak
-Elite size and strength for position

-Limited route runner
-Struggles to separate at top of his stem due to lack of explosiveness
-Comes off the line upright, leading to struggles against press
-Not creative after catch and isn’t a threat to pull away with YAC
-Relies on body catches a ton despite great hands
-Heavy feet for position

A consistent red-zone threat and a chain-mover at Mississippi State, De’Runnya Wilson put up some solid numbers during his three years as a Bulldog.

At 6-feet-5, 224 pounds, Wilson has elite size for the position. Adding his 33 7/8-inch arms and 80 1/8-inch wingspan, Wilson has an outstanding catch radius that can turn would-be incompletions into catches, making him a favorable weapon for quarterbacks who don’t need to make perfect throws every time in his direction.

Despite the great size and catch radius, Wilson is limited with his lack of explosiveness in and out of breaks, as well as with his below-average long speed, limiting him to an intermediate weapon.

That being said, I’m not sure that Wilson is better suited to be a tight end at the next level with his limited speed and explosiveness.

He’s a physical blocker that displays a nasty streak at times and has tremendous reach to erase defenders once he gets his hands on them. It might not be a popular opinion, especially for SEC fans, but it’s something that has to be talked about.

I’m just not sure he has the ability to succeed in the NFL against boundary and slot corners with his physical limitations, mainly with speed.

Let’s get to the film.

Starting with a great play first, simply because I don’t want you to tune out right away after that opening monologue.

I want to be clear that Wilson has a lot of good intangibles for a big-bodied receiver.

Despite not being much of a creative runner after the catch, he’s a physical runner that is hard to bring down for defensive backs.

In the clip above, I love the great hands catch to snag the ball out of the air away from his body, but what really separates this play for me is the physical style of running after the catch.

Wilson just drags bodies into the end zone. His long strides allow him to cover a lot of ground, but he’s not going to pull away from defenders. That’s where he’s going to have to focus at the next level is bettering his explosiveness. That being said, I’m not sure there’s a ton of room for improvement though.

However, that power as a runner is intriguing, especially for a receiver with his size.

Although Wilson isn’t a burner, he has a significant height and reach advantage over defenders, which he uses for his personal gains quite well.

In the clip above, Wilson doesn’t high point the football, but his reach allows him to go up over the defender, swallowing up the ball for the score.

On top of the reach, he has the great play strength to hold onto the ball with a defenders arm in between his. Tracking the ball isn’t a problem with the junior receiver at all, but on plays like this you’d like to see him go up and high point the football.

Speaking of the impressive catch radius….

Look at the way Wilson is able to snare this ball thrown well behind him with ease. The throw is well behind him and off target, but with his big mitts and long limbs, he’s able to contort around to make the catch behind him.

As I mentioned earlier, Wilson has a habit of saving off-target throws for his QB, which should endear him to his next passer at the next level.

Adding to his catch radius, Wilson uses body positioning to his advantage, showcasing his basketball skills.

Much like tight ends Antonio Gates, Julius Thomas and any other former basketball player playing tight end in the NFL, Wilson knows how to box out defenders to shield them from the catch-point, allowing him to make catches in traffic without the threat of a defender getting his hands into the play.

You have to go through him to get to the ball in most instances, and if you were to do that you’d draw a flag. The junior is very advanced in that regard, which should at least put him slightly ahead of the curve at the next level in this sense.

One big reason why I think Wilson could make the transition to tight end a successful one is because of his blocking skills.

He’s not a guy that’s going to loaf as a blocker. He might not have the perfect technique, but with his long reach and physicality, he has the ability to simply erase defenders from the picture on running plays.

In the clip above the Auburn corner is howling for a holding penalty, but the great positioning and power in his legs allows Wilson to simply walk the corner backward as Dak Prescott runs behind him.

Granted, he did this to a cornerback, but I don’t see a glaring reason why he couldn’t successfully do this to linebackers or defensive ends in running plays. He’d certainly need time to make the switch and learn the position, but the blocking ability is abundantly clear.

Where Wilson really struggles is with his route running and explosion.

He’s slow in and out of cuts in his routes, rarely sells double moves and tends to show exactly what he’s going to do off the line, allowing defenders to run his routes for him, leading to plays like this.

That’s an easy interception for Auburn’s Jonathan Jones, who knows the double move is coming and the ball is going to the back pylon.

The move inside at the top of his stem selling the post route is very poor. His weight doesn’t shift at all, and in fact leans more to the outside, selling exactly what is coming.

He’ll definitely need to clean up his route running at the next level or he’ll really struggle to make plays with his lack of explosion and separation.

Overall, Wilson is worth a late-round flier for a team that can be patient with him and develop him into whatever they want him to be, whether that’s a red zone threat or a tight end that needs a year to fully make the switch.

With his size and impressive catch radius, he’ll crack and NFL roster, but just how effective he is depends on how much work he’s willing to put in to fully grasp his craft.