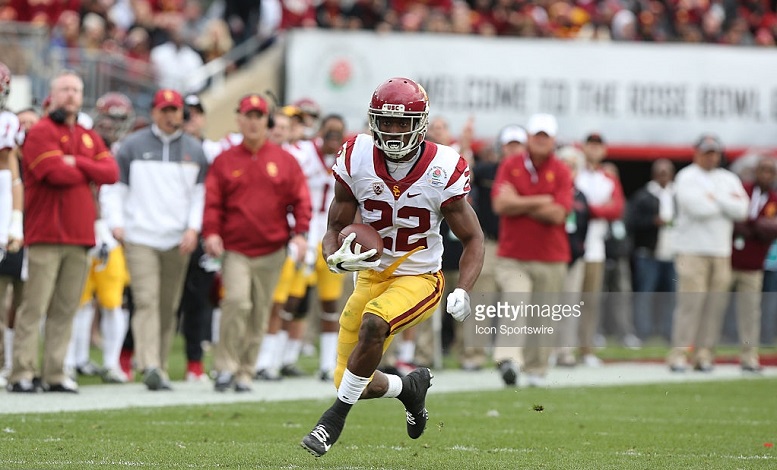 Rounding out the bottom half of this year’s running back draft class is USC’s Justin Davis. A running back who has enjoyed moderate success at USC, Davis figures as a low risk – low upside prospect.

Davis is a very disciplined runner, who in the right scheme can excel. The USC running back would be most comfortable as a cutback runner in a zone blocking scheme.

Here in a 2015 matchup against Oregon, Davis takes the hand off and leads to his right before cutting back to a backside lane between the left tackle and tight end. Due to Oregon’s second level defenders shifting to towards the right side of the offense, Davis can leisurely make his way downfield.

Davis also does a great job at staying disciplined with the blocks set up in front of him, a key reason why he averaged over five yards per carry over his college career. Not one to trust his instincts over the game plan, Davis enjoyed great success passing through the channel created by his linemen.

Davis follows behind his left tackle, who is releasing and taking on a Stanford inside linebacker. In doing so, Davis picks up a first down on a play executed almost as well as it was designed.

While being a disciplined runner has its fair share of perks, it has also set a cap on Davis’ ceiling as he approaches the NFL Draft. Due to a lack of power and instincts, Davis struggles to create when his offensive line is unable to create a clear running lane.

When the USC offensive line is unable to pave a lane for Davis, you will likely see a run that resembles the one above. Without a lane present, Davis is no longer the disciplined, decisive runner seen before, instead he transforms into a more hesitant running back uncertain about his ability.

As for his role as a potential third down back, I believe Davis could contribute in this role. Though he did not average many receptions at USC, his hands are better than advertised. Davis’ performance in pass protection will need require more coaching at the next level as while he may not be among the worst in his class at pass protection, he does tend to shoot low instead of anchoring.

While Davis may not be able to raise his roof much higher, if at all, I do believe there is a place for him in the NFL. Davis’ film leads me to believe that he is better suited for a zone blocking team as it plays best to his disciplined running style. While Davis may not steal the show, he does have the potential to be a decent mid card act in a running back rotation.