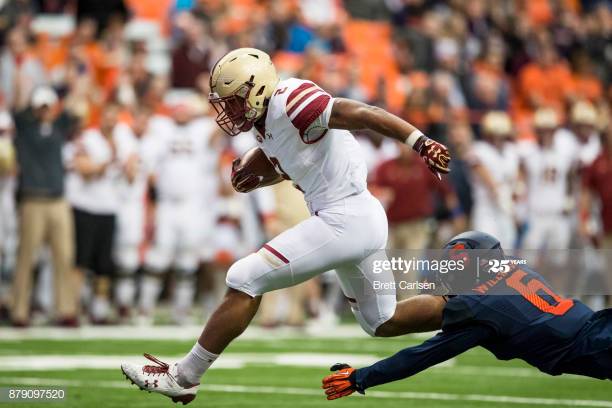 -Powerful, well-proportioned frame
-Moves very well for a back his size and has serious explosiveness
-Productive, consistent running back; you know what you’re getting week-to-week
-Gets better as game goes on; frame built to withstand heavy workload game to game
-Sound pass protector that has good initial blow and absorbs contact well
-Nimble, quick feet to change direction with ease
-Rarely goes down on first contact

-Heavy, heavy workload in college; how much tread is left on his tires
?-Not a make-you-miss back; one-cut style that looks to dish out punishment
-Needs a runway to get going downhill; not much nuance to his game when pressing the LOS to let holes develop
-Struggles to process in protection at times
-Limited use as a receiver
-Stiff route runner and not a natural pass catcher

-Full name is Algiers Jamael William Dillon
-Grandson of College Football Hall of Famer Thom Gatewood, who was the first African-American team captain at Notre Dame
-2017 ACC Rookie of the Year and First Team Freshman All-American
-First Team All-ACC selection in 2018 and 2019
-Third Team All-American honoree in 2019
-Played in 35 career games at BC, starting 26 of them
-Finished career at BC with 845 carries for 4,382 yards and school-record 39 touchdowns.
-Added 21 career receptions for 231 yards and two touchdowns
-Invited to 2020 NFL Scouting Combine, where he ran a 4.53 40-yard dash, recorded 23 reps on the bench, added a 41-inch vertical jump and a 131-inch broad jump, and recorded a 7.19 3-cone

Not many running backs in today’s game of football possess the size and explosiveness of one AJ Dillon. In recent years, only one really comes to mind and that’s current Titans star runner Derrick Henry.

Dillon has the production any evaluator could ask for, as well as the size, strength and speed. The only real concerns with Dillon is the amount of work he’s been asked to do in three years at Boston College, and the run style where he looks to dish out punishment.

With the way the running back position is changing year to year from a team building perspective, maybe the concerns aren’t all that serious for teams because there’s a very good chance that Dillon will be an absolute workhorse for a run-first franchise with Super Bowl aspirations.

The strength with Dillon is apparent right away on film.

This run from 2017 made all the highlight reels, thanks to what Dillon did to this Louisville defender.

Dillon has a massive, well-proportioned frame and this run shows just how much upper body strength he has.

It’s very clear just how much Dillon needs a runway to get going downhill, but once he gets going he’s a tough back to stop.

You can see him run through a weak arm tackle early in the run, and then bounce the run outside with a stiff arm. He can really get moving when he’s in space, which is a scary thought for defensive backs serving as the last line of defense.

He moves so effortlessly laterally to shift gears and find the hole. Once he’s at top speed, look out. Arm tackles and shots to his lower half really don’t phase him. He’s a tank.

One thing I’ve noticed with Dillon is that he’s a stiff route runner out of the backfield and isn’t a natural pass catcher of the football. I do think the ability to become a solid receiving back is in there though, based on this catch I saw against Notre Dame last season.

This is ball that’s thrown outside of his frame, forcing Dillon to lean heavily on his hands. That’s a solid fingertip catch on the move.

As a pass blocker, Dillon is very solid overall in this area of the game. He has a really good initial punch, absorbs contact well, and has good technique throughout protection.

However, he struggles to process at times, which leaves his quarterback vulnerable to free rushers.

I’m not sure what Dillon was thinking here, but it was a major error on his part in protection. He completely misses Alohi Gilman on the delayed blitz, instead turning inside to pick up a linebacker that is no real threat to apply pressure on his quarterback.

He looked confused and unsure of himself on the blitz, which led to the error. For him to stick on the field in obvious passing situations as a protector, he has to process quicker.

Overall, I like Dillon a lot. He’s an absolute load of a running back with unreal explosion in his frame. My only real concern is the workload he had in college. It worked for Boston College week-to-week offensively, but just how much does he have left on his treads for the NFL?