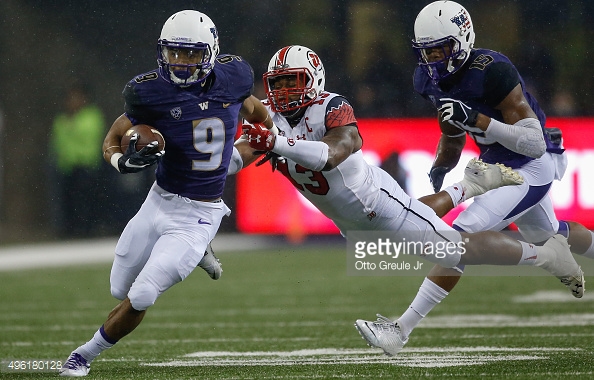 – Needs to keep vision in the backfield, can step too far downhill, needs to keep his eyes up engaging with blocks
– Slow sideline-to-sideline, 5.05 40
– Can mess up footwork and “read-hop,” not step
– Too quick to abandon the hole, will jump up against the run out of his zone
– Inconsistent tackling technique
– Hips not disciplined flowing with run plays, flips to sideline
– Bad tackler, both in a phone booth and in open space

Defensive players are supposed to thrive on contact, and Paul does just that. He takes his read-step here (weakside 10 technique), and closes off that while the other LBs are still trying to process what they see. I also really like him keeping his head up and eyes in the backfield while getting his footwork to his left. He plunges forward and stonewalls the RB in the gap. Really impressive for a guy his size.

Read, diagnose, react, attack. Paul puts it together so much faster than normal linebackers do. This is reckless, aggressive play, but he makes it work.

As Michigan strings this run outside, Paul chases from his weakside position. As soon as he senses the RB trying to bend the read, he completely adjusts his angle, getting downhill in a hurry. It’s a weak arm tackle attempt for Paul, and easily broken. I love the ability to get there in a hurry and sort through the trash, but you have to finish this play if you’re right there anyway.

However, Paul does need to be conscious of his hips. He flipped too far to the sideline here, giving away the cutback. He needs to keep his body (shoulders over hips) parallel to the line of scrimmage and shuffle laterally down the line with the run until he’s able to plant his back foot and get downhill.

Paul has a surprising amount of play strength. On the blitz here against left guard Ben Braden, he gets his hands up and walks him back, despite being down nine inches and almost 90 pounds. I realize that Braden never anchored, but whew…that’s some serious power to plant an offensive lineman in QB Jake Rudock’s lap.

High-motor, coming all the way across the field to take a shot at the QB, despite a brief pause when he thinks a screen is coming. He may be a little guy, but he likes to bring the ruckus.

Flash of instincts in coverage. Sees the slant coming all the way, easy pick for him. If you’re asking your inside linebacker to be reading routes like this, he has to be able to both see it and get there. Paul did both, easily.

Paul is built like a fire hydrant and there’s no mistaking that. Since 1999, only ten players at the combine have measured at 5’10” and 230+, with Jonathan Stewart highlighting a list of mostly fullbacks (including this behemoth). Paul is the 11th, by my unofficial reckoning. What does that mean? It means he’s short and stocky, which can be difficult to place at linebacker.

His skillset is a great fit for an old-school thumping 3-4 ILB or 4-3 MIKE. The issue is, he’s ridiculously slow sideline-to-sideline and in any kind of straight line. If I had to guess, the reason he doesn’t keep his hips even and shuffle is that he’s just not fast enough to do that, so he has to flip. And his body is probably a better fit at 4-3 WILL, leaving him with just not enough options in the defense considering he’s probably a two-down ‘backer (unless he’s just playing middle zone, and even then I’m hesitant).

Why then do I have him draftable? Quite simply, Paul is a thumper and possesses play strength ridiculously disproportionate to his size. He stones backs in the hole and reacts against the run far quicker than most of his compatriots in this draft class. He’s a little more lithe than Shayne Skov, another two-down thumping Pac-12 LB who went undrafted a few years ago. He also has special teams value as a wedgebuster, where he wouldn’t need speed so much as strength.