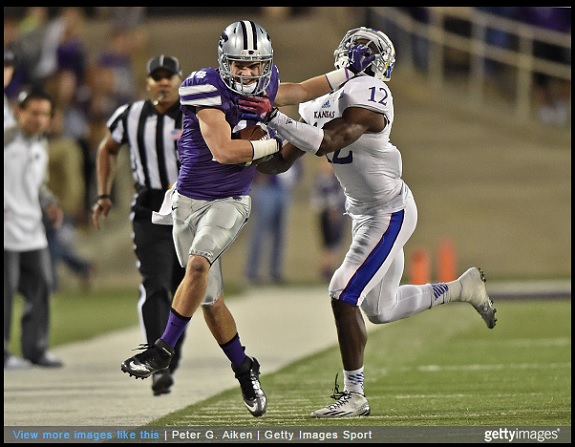 Today we look at a pre-draft visitor that the Steelers brought in, cornerback Dexter McDonald.

-Not as physical as you’d like – would like to see more urgency to the football
-Forgets to turn and look for the ball, can cause excessive penalties at the next level
-Has trouble shedding blocks, needs to be more aggressive in run support
-Some missed tackles
-Has trouble with curl and comeback routes
-Needs to stay low to help change direction faster

–2011 Started at Kansas, saw limited playing time and left for Butler Community College in 2012 where he played one season there to get his grades up. Played in five games and recorded five tackles, one interception, and one sack. Transferred back in 2013
-Fifth in the league in pass breakups with 13
-Started 24 career games and played in a total of 36
-23 career passes defended
-81 total tackles and 4 interceptions
-4.42 40-yd dash / 40.5 ft. vertical jump
-Liberal Arts and Sciences major
-No combine invitation

McDonald never really wow’d me. His positives were very apparent, but so were his negatives. His long and short speed really jumped out at me. Out of the three games I watched, he was only burned once. If he was beat off of the line you could see the recovery speed in action and it was excellent. McDonald very often puts himself in great position to make a play on the ball, but fails to turn his head around looking for the ball. If he would turn his head, he be much more dynamic and also not get called for pass interference. One huge flaw of his is that he is not aggressive in the run game. He kind of sits back and plays the safety net role instead of shedding blocks and pursuing the ball carriers. Plays his best in press coverage.

In press coverage here. Fluid hips and uses his speed to blanket the receiver. Has some trouble high pointing the football, but still a play well done.

A rare spot for him here, in the slot. He reads run and is able to pursue the ball carrier to make a play. Great read and tackle. Need to see this type of mentality more often.

Playing in off coverage. Sees the screen and pursues the ball carrier and completely whiffs. Tries to one arm tackle with horrible form. The ball carrier barely made a move. Need to clean this up.

McDonald comes from across the field to stop what looks like to be a sure touchdown. Displays his high effort and blazing speed. What you love and expect from your players.

Shedding blocks is a huge problem for McDonald. Taking his size into account, you wouldn’t expect that and would want for him to be able to shed blockers to make plays. In this GIF, he is unable to disengage 35-40 yards downfield.

If I’m drafting McDonald, it’s not before the 7th, but don’t let that be discouraging of his play. He is what he is, and that is a project. I know Steelers fans are sick and tired of cornerbacks that fall off of the roster quickly, but I feel that if McDonald had great coaching and time to grow, he could be worth the pick. He will surely be a special teams demon; the kid played special teams into his senior year and was excellent for the Jayhawks.

There may not be many negatives on McDonald, but the ones outlined are huge and carry great concern. If he was more aggressive and willing to be physical in the run game, he could be considered as early as the 5th. Teams look at a 6’1” 200lbs corner and expect a nasty, physical guy who can be a force in the run game and McDonald simply is not.

The Steelers will likely draft a cornerback rather early, so McDonald would be competing with B.W. Webb and Kevin Fogg for the 5th cornerback position and roster spot. If McDonald can at least be on the practice squad, he could have time to grow and learn.

The Steelers had McDonald in for a pre-draft visit, so we will see on draft day if they liked what they saw. If he goes undrafted, look for him to be a priority signing following the end of the draft.