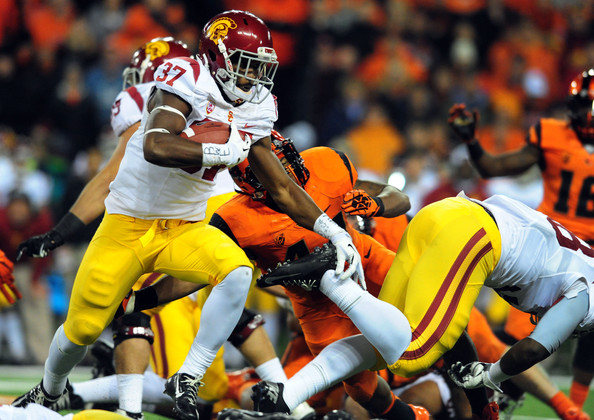 Since today is the East/West Shrine Game comprised mostly of mid-tier prospects, it’s appropriate to focus on someone in that grouping (though he isn’t playing in today’s game). We’ll flip back to the offense and evaluate USC running back Javorius “Buck” Allen.

– Though maybe a little tall, possesses a good frame
– Patience to wait for his blocks
– Good vision, ability to press the hole
– Lower body strength to change direction and show some explosion hitting the lane
– Glimpses of a burst and second gear in the open field
– Downhill runner, doesn’t waste yards
– Active participant in the passing game
– Some competency/willingness in pass protection
– Productive career

– No defining trait to his game
– Overall, lacks ability to make defenders miss
– Doesn’t often get more than what’s blocked
– Speed and power are just average
– Tends to go down on first contact
– Has some ugly drops
– Inconsistent in pass protection

Statistically, Allen put up fairly gaudy numbers. Maybe I selected some bad games but the production didn’t match up with the tape. But as always, we’ll start with the good.

A quick glance at his stats shows the high reception total. His 41 catches in 2014 ranked third on the Trojans. His “active participation” is meant to describe him being used beyond check downs. Allen was used on routes designed to give him the ball.

And that’s even going beyond screen plays. Against Arizona State, USC got him the ball on a third and seven wheel and a third and eight angle route. The latter is shown below. Both went for first downs. He would go on to lead the team in receiving yards that day.

He’ll give you glimpses of a second gear in the open field. Runs away from the Nebraska defense en route to a 44 yard score.

His pass protection appears inconsistent, we’ll expand on that later, but his frame lets him stymie rushes when he gets himself square to the blitzer. Does a nice job here against this Boston College defender. 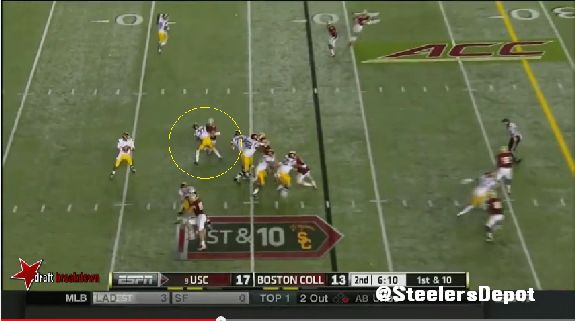 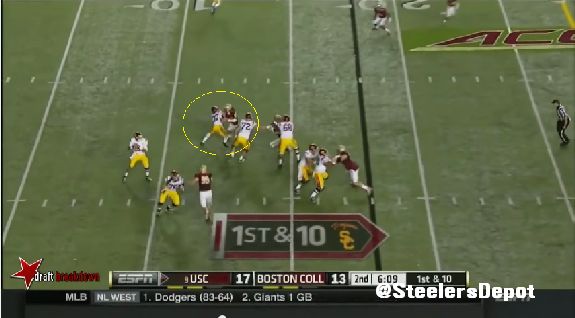 And as I wrote, he’s a downhill runner. That’s a term that probably gets overused but it’s still the truth. No dancing at the line. Find the hole, hit the hole, and get what’s blocked.

Unfortunately, the last part of that sentence isn’t always a compliment. Though Allen has busted off some big runs in his career, good blocking has often been the benefit. Any back is going to naturally be aided by that but I didn’t see many plays of Allen really creating the play on his own.

He didn’t waste yards but he also didn’t create yards.

Too often he went down on first contact. That either led to him getting stuffed for minimal gains or missing the chance at turning a medium-sized gain into a huge one.

The safety is the last defender between Allen and a clear path to the end zone. And he’s able to trip him up. A potential 31 yard touchdown goes for just seven.

In the margins of my notebook, I’ll note plays I could possibly use for GIFs or pictures when I go to write up my reports. For Allen, I have “down easily” scribbled (you may have seen my horrific handwriting) down seven times across three games. Not a promising ratio.

Here’s an example of poor pass protection from Allen. A failed cut block leads to his quarterback getting taken to the ground.

There’s just not a lot that gets me excited about Allen. I’ll grant he isn’t a plodder the way Shonn Greene – the gold standard for that trait – is or the way I pegged Andre Williams in my report last year. He’s a step above that. But only a marginal one. And “marginal” doesn’t cut it in the NFL.

Any player has to have a defining trait. I don’t see it with Allen. He offers a little bit of speed, a little agility, a little power, and decent vision, but there’s nothing that stands out when I think of Buck Allen. Prospect-wise, he’s just a guy.

As a person, I’m sincerely rooting for him. His backstory is both inspiring and heartbreaking. His biological mom was a teenager when she had Allen and ultimately opted to let her mother raise him when he was two.

His brother would go to jail on a murder conviction. Allen lost the closest thing he had to a father figure.

When he got older, he met Mickey and Alice Cullen, assistants at the local Boys and Girls Club. They grew close to Allen, eventually taking him into their home once he reached high school. Allen especially grew close to Alice, who treated him like a son. Sadly, Alice was struck with cancer and passed away during Allen’s sophomore year.

I say this to provide a little more scope to who he is. These are people we’re evaluating, not just scouting reports. Even though this report will be classified as “negative,” it doesn’t mean I don’t root for him to succeed. I hope he does.

But from an on-the-field standpoint, his ceiling is limited. Your typical player who had a better college career than pro. I don’t know the rational of his decision to leave school a year early but he may have been best served to finish school.

Allen will probably get labeled as a third down back. An ultra-light version of Roy Helu.

If the position is not addressed in free agency, you can bet the Steelers will draft a running back in the later rounds of the draft. But Allen shouldn’t be that guy.

However, I have watched another running back and came away very impressed with him. There will be a report on him coming in the near future.

Games Watched: at Boston College, vs Arizona St, at Nebraska