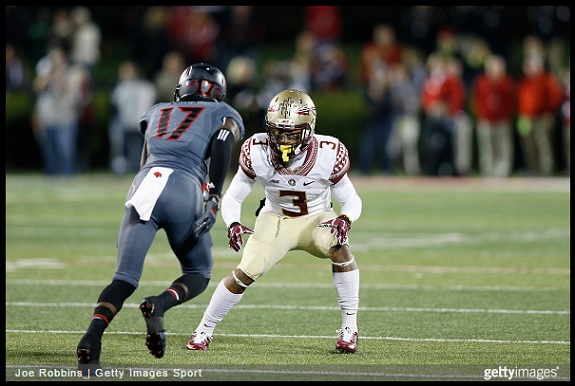 If you are comfortable with the cornerback position within the Steelers organization, then you are mistaken. The Steelers need help and security at this position and have failed to draft a corner that fulfills their rookie contract in quite some time. Today, we evaluate cornerback Ronald Darby.

-Plays fast and possesses great recovery speed
-Plus athlete and high effort in the run game
-Does not shy away from contact in the run game
-Has special teams experience
-Excellent tackler, barely misses and doesn’t get ran over, has great form
-Big hitter with safe form
-Superb press-man corner, is in the receiver’s pocket downfield
-Takes great angles in the run game, uses speed to his advantage
-Has good instincts and awareness
-Fluid hips

-Gives far too much cushion to receivers
-Flips hips too early, relies on his speed too often
-Due to his size, he has some trouble shedding blocks, BUT, he does not lack effort
-Had opportunities to get interceptions but has stone hands
-Needs to attack the ball in the air, high point it and take a better angle to the football
-Has technique issues, especially against post/corner routes along with comeback routes
-Needs a quicker reaction

Darby is fast, as proved by his combine and pro day numbers. His speed translated to the film. He is a sound, reliable tackler who doesn’t miss often. If he had a better reaction and twitch, I would be much higher on him. He tends to rely on his speed too often and gives too much cushion to wide receivers.

Darby’s speed is one of his most valuable traits. Here, he is able to use his speed and fluid hips to change direction and track down the ball carrier, who is trying to beat the Florida State defense to the edge. Darby cuts the running back short and brings him down.

Darby did not register an interception in 2014. Much is due to his pass break ups, but a lot has to do with him not having soft hands. Ike Taylor syndrome. Here, in the same game he has two opportunities to earn an interception, and in the 2nd GIF, a sure pick-six.

Here is a GIF to get fans excited. Darby lays a lickin’ on a defender as he tries to catch a floating pass in open space. He uses his speed to reach the defender, and when he does he separates the receiver from the football. Has issues with post and corner routes, which is evident here. He is raw in his technique and timing. Phillip Dorsett gets the best of Darby here.

Great route runners will be able to take advantage of Darby. He flips his hips too early instead of staying in his backpedal, which needs improved.

Darby doesn’t allow separation in vertical routes. Here, he is in the Virginia Cavaliers wide receiver’s pocket the entire play. Allows no space and forces the QB to over throw the football.

Darby’s lack of size and strength become a problem when a bigger or stronger receiver engages him. He does not give up, though. His effort does not diminish when engaged and that is a plus, but here is overrun. He cannot shed the block and the touchdown is allowed.

Another note: Darby does not do well against bunch formations.

In the 1st GIF, Darby does a great job shedding a tackle, maintaining his balance and making the tackle. Excellent effort

In the 2nd GIF, again he does a great job shedding the tackle, not letting the receiver engage.  He makes a sure tackle and shows his toughness.

Note: these two GIFs are consecutive plays, so that is an inference that Darby’s effort is consistent.

I’m not on the Darby bandwagon like a lot of people have been after his 4.38 40-yard dash. He performed very well at the combine as he ran the 40, vertical jumps, broad jumps near the top 5 percentile in his position group.

On tape, I was not all that impressed, and his statistics are not very convincing either. The combine numbers surely translated, though. He showed his speed and his athletic gifts throughout each game.  I believe that analysts are over-hyping Darby, just like they did P.J. Williams. I was very underwhelmed and did not get a wow-factor from him at all.

Relying on your speed alone will hurt you, and that is exactly what occurs with Darby. He gives too much space to opposing wide receivers and they exploit Darby’s weaknesses. If an offense has an elite wide receiver, Darby will get eaten up. Given his size and speed, I believe Darby could be a great slot corner. He could also play outside, but will need to improve the timing of when he flips his hips.

The current cornerback situation for the Steelers is not a comfortable one. I could see Pittsburgh taking two cornerbacks in this draft. I do not believe Darby fits what the Steelers need in their corners. I believe the Steelers need a lengthy corner that is a playmaker. Turnovers have been an issue for the black and gold for a while now.

If I am the Steelers, I avoid Darby. I would much rather have a lengthy cornerback that can make plays and fit into their scheme. Darby will be drafted early and if drafted by the Steelers, would be their first corner drafted. I would not pull the trigger on him. He will be over drafted and I do not believe Kevin Colbert will overdraft once again.